We're Returning to Branton! I'll be reviewing the first three books in Nazarea Andrews' University of Branton series! On to the second book in the series, Beautiful Broken! 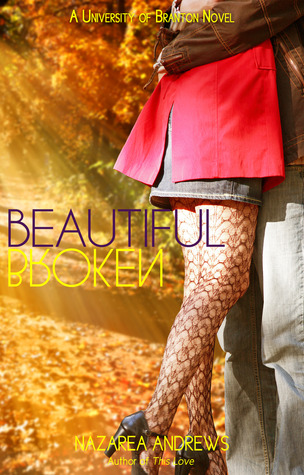 Synopsis:
She's been broken by her past. He's been breaking for as long as he can remember.
Together, they can make each other whole--or destroy each other.

When his best friend asks for something, Dane rarely says no. But babysitting a newly sober Scout Grimes for three weeks isn't exactly a normal request. And with their history, it's a recipe for disaster. Not to mention, she's drop dead gorgeous and he can't touch her.

There are few people Scout trusts as much as Dane Guillot. He's always been her safe place, where nothing can hurt her. He's also been the only man she's never let herself want--screwing up their friendship isn't worth one amazing night together.

They have too much history, and too much personal baggage to ever work. But if they are willing to take a chance on love--it might be worth the risk.

Beautiful Broken is a touching story of painful pasts, heartache, anger, escape and coming to terms with it. Nazarea Andrews wrote a compelling story of two people needing each other without realizing it until the truths come out and the masks come off. Of course, there's the hot and bothered intimate and sexy parts, too, but Nazarea wrote it so beautifully that it didn't feel dirty and cheap....well, between Dane and Scout...anyways.

Beautiful Broken is Dane and Scout's story. Both characters were first introduced in the first book This Love. However, this romance isn't like Atticus and Avery's story. Dane and Scout are both "broken" from their pasts. Before I even begin, I have got to warn you that this touches on some serious issues of drug abuse and sexual abuse that may be triggers for some. With that being said, I thought that Nazarea Andrews wrote a beautiful story about how these characters deal with their pasts. Again, like in This Love, secrets can either break you or make you stronger. Nazarea wrote with a lot of sensitivity and realism in regards to the issue of relationships, drug abuse, sexual abuse, rehab and therapy. There was compassion and empathy in Dane and Scout's story.

As for the characters, Dane and Scout are so alike, but, yet, complicated, that they don't see how similar they are. I love how they interact with each other. Dane understands too well about what Scout is going through, and he keeps her secrets. Balancing his friendship with Atticus and love (even though he doesn't want to admit it) for Scout, weighs heavily on his mind. These two wears masks to hide the truth of what they fear and hurt from, but together Dane and Scout broke down and they reveal what they have been hiding. In a short span of time since Scout is released from rehab, both their worlds collide and they come together realizing that Dane and Scout need each other. In the end, both face the truths of their pasts and work on coming back from it.

Dane and Scout's story touched my heart, brought tears to my eyes and made me laugh. Beautiful Broken is definitely an emotional whirlwind like Dane and Scout's relationship. Again, Nazarea Andrews wrote a realistic story dealing with complex and real issues.