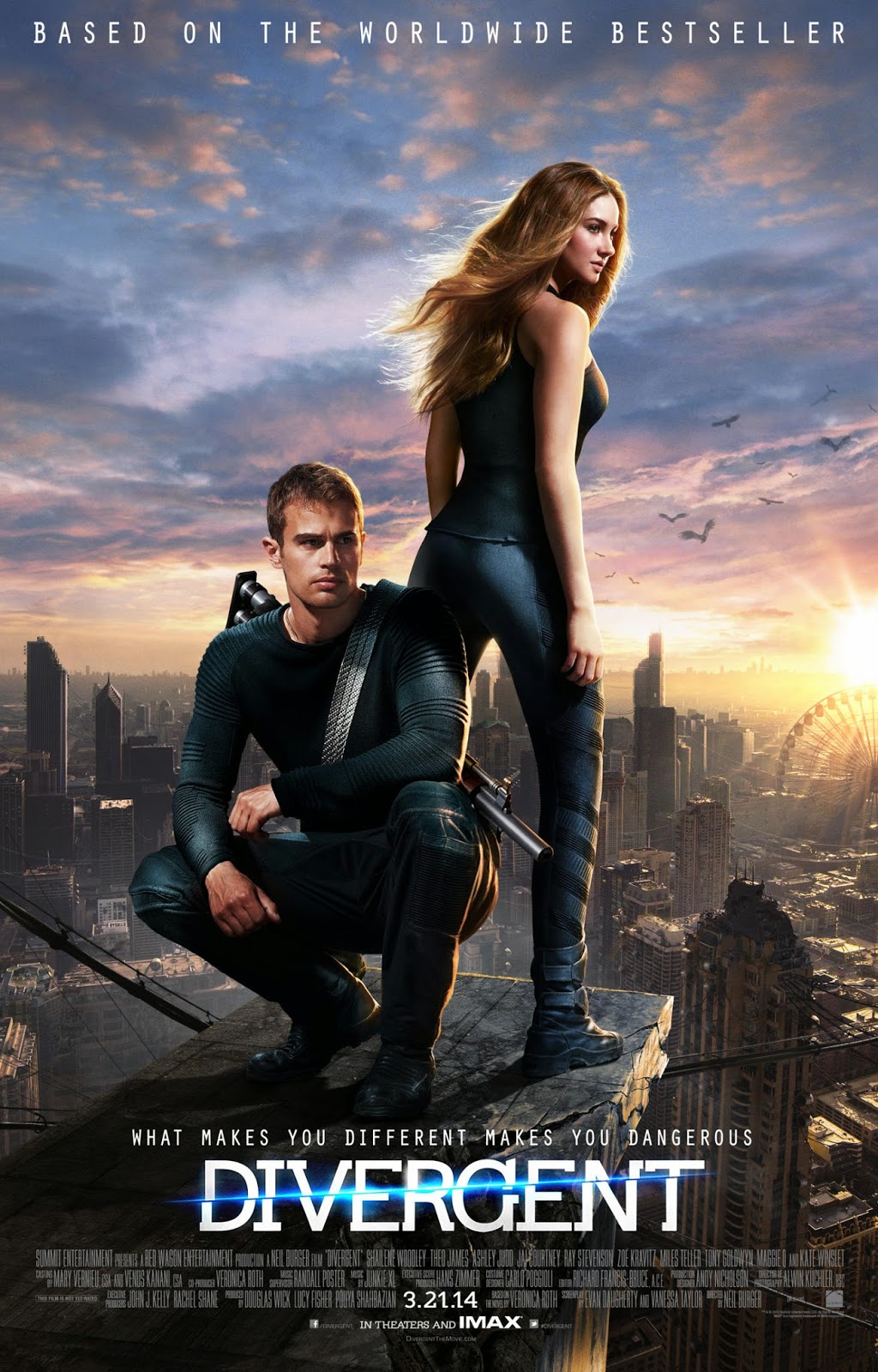 Based on the novel by:
Veronica Roth

Synopsis:
Divergent is a thrilling action-adventure film set in a world where people are divided into distinct factions based on human virtues. Tris Prior (Shailene Woodley) is warned she is Divergent and will never fit into any one group. When she discovers a conspiracy by a faction leader (Kate Winslet) to destroy all Divergents, Tris must learn to trust in the mysterious Four (Theo James) and together they must find out what makes being Divergent so dangerous before it's too late.

Mariah and I finally watched Divergent on the last night of its opening weekend. Hmmm... Let's see....what thoughts were going through my mind after watching this. I thought it was good. It was thrilling, action-packed with a touch of suspense with its conspiracy theme. Essentially, Divergent focuses on this one young woman who questions where she belongs in a society of conformity. I found it interesting how the concept of their society to avoid independent thinking, but, yet, it created conspiracy. Apparently, human nature and individual thinking cannot be suppressed.

As for casting and setting...I really thought the cast had chemistry. The setting they created was realistic, for a world that survived a devastating war that decimated everything. I did like how they differentiated the factions with the color and types of clothes that they wore. Not only that, the style of clothing was specific for each faction. The cast did an amazing job in compelling me to believe their characters. The romance between Tris and Four was also sweet.

Of course, being a first book in a book trilogy, it usually will leave many unanswered questions. I found this film will give moviegoers an intro to Tris' growth as a Divergent. Granted that the film focused on Tris and her growth and training, but it seems right in introducing the audience on describing what and who is considered Divergent. For one who hasn't read the book yet, I thought the film was adequate enough to keep me intrigued and compelled to Tris' plight of self discovery. I definitely want to see a second film. Although the film had its beginning, climax and conclusion, it still left it open for the next installment in this trilogy. Good thing, too, since news has it that the next two books got the greenlight to get its film adaptations.

I think this film can hold its own even without reading the book. That being said...films are just adaptations of the book. As long as the film adaptation captures the essence of the book, then the film has stayed true to the book and the world the author created. But, not all fans of the books will see it that way. I, myself, enjoyed the movie without reading the book. But, I definitely will have to read the book soon....just because I'm such the booknerd...hahaha!

Posted by Jasmine Albitos at 3:58 AM