JASMINE's THOUGHTS on The Violet Hour by Whitney A. Miller 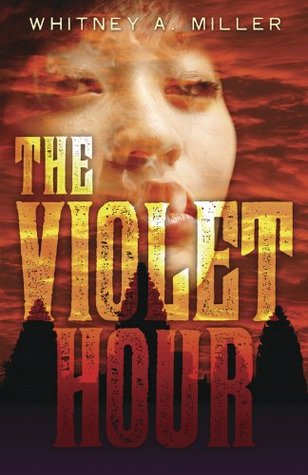 Synopsis:
The voice inside me is breaking free. I can't stop it.

Some call VisionCrest the pinnacle of religious enlightenment. Others call it a powerful cult. For seventeen years, Harlow Wintergreen has called it her life.

As the daughter of VisionCrest's patriarch, Harlow is expected to be perfect at all times. She must be considered a paragon of integrity by the other Ministry teens and a future leader in the eyes of the world.

Despite the constant scrutiny Harlow is keeping a dark and dangerous secret, even from her best friend and the boy she loves. She hears a voice in her head that seems to have a mind of its own, plaguing her with violent and bloody visions. It commands her to kill. And the urge to obey is getting harder and harder to control...

Whitney A. Miller lives in San Francisco with her husband and a struggling houseplant. She's summited Mt. Kilimanjaro, ridden the Trans-Siberian rails, bicycled through Vietnam, done the splits on the Great Wall of China, and evaded the boat police in Venice, but her best international adventures take place on the page!

Every turn of the page literally made my skin crawl! Wow! Whitney's writing filled me with suspense and dread from the very beginning. Although it seemed that it dragged in the beginning, it still kept me curious and interested in Harlow's situation of having to be perfect, yet consumed with this "voice" and disturbing visions. With that being said, The Violet Hour pulled me into a dark and spiritual world of twisted religion that I could not put down.

As if watching a horror movie, I wanted to "look away" at the descriptions of these horrific visions that Harlow was having. In a world that this religious group had more power than any government, Harlow is plagued with these visions that made me dread turning the page. The suspenseful plot twists made me want to keep reading! Harlow's plight also takes us on a tour of Asia from Japan to China to Vietnam! Whoa! Talk about cult that went global....very scary thought! And... Whitney accomplished it in the pages of The Violet Hour!

For her debut novel, Whitney A. Miller has created a gripping and suspense-filled horror story that made me cringe in fear and. As the story unfolds, each chapter revealed so much, yet so little, of what is REALLY happening to and around Harlow and her friends. Yes, it is definitely a mystery that Harlow is determined to solve...for her sanity's sake.

If I was in a movie theater, and The Violet Hour was a movie, I would be cringing in my seat and gripping the armrests so tight that my knuckles would turn white! Even now, after reading the book, when I think about The Violet Hour, I get shivers down my spine...hahaha!! This definitely was a suspense-filled creepy horror story that I enjoyed reading!

Posted by Jasmine Albitos at 5:32 PM