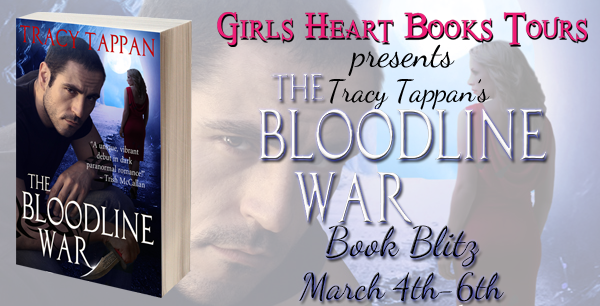 Welcome to the Book blitz for The Bloodline War by Tracy Tappan. 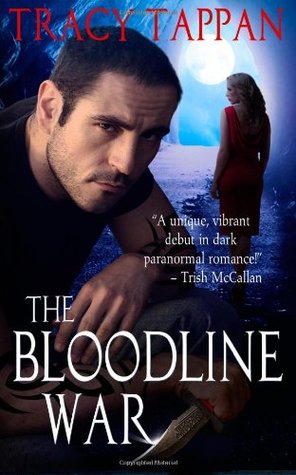 Synopsis:
A car accident changes everything for Dr. Toni Parthen. Her computer hacked hospital blood test confirms she’s the carrier of a gene that’s the key to salvation for a unique race of human beings. Abducted from her hospital room to a secret, underground community, Toni is asked to do the unthinkable: procreate with a man from a race called Varcolac—a species that must consume the blood of other humans to survive. Then bizarre turns dangerous, because a new, mysterious enemy also wants her special DNA, and Toni finds herself in the middle of an all-out war to possess her.

It’s the job of Jacken Brun, leader of the Warrior Class, to keep the captured women safe from a demonic race of humans who rule a neighboring part of their underground world. His challenges multiply when Toni inflames the women into mutiny, and then there’s his biggest problem…his growing desire for the infuriating woman herself. Afflicted with a dark genetic makeup, Jacken can never be with a woman. Until Toni uses her scientific ingenuity to find a way for her and Jacken to be together. But then the new enemy faction unearths Toni and drags her to their hidden lair, where they’ll inflict an unspeakable cruelty on her to gain access to her valuable genes.

It will take every warrior skill Jacken owns to save the woman he loves, but only if he can find her in time….

*Interview with Tracy*
I think it boils down to me needing someplace to go with my imagination. I’ve always really enjoyed make-believe. When I was growing up and we’d go on family camping trips, for example, we’d take off on a hike, but my father and I couldn’t go much more than several yards without stopping to get into a sword fight with our walking sticks. I raised my two kids the same way. More often than not, you could find us with bath towels clothes-pinned around our necks, “flying” around the house and fighting bad guys. Yeah, stay tuned, there’s a lot of crazy stuff in my brain.

Too many great ones! So I’ll stick with my favorites from the vampire genre: Lara Adrian’s Midnight Breed series, Jeaniene Frost’s Cat and Bones, and, of course, the incomparable JR Ward’s alpha hunks from the Black Dagger Brotherhood. Recently a reviewer on Goodreads wrote about my hero from THE BLOODLINE WAR, saying, “Jacken can hold his own against the best of the black dagger brotherhood or any of my favorite lords of the underworld!” My jaw dropped. For my hero even to be mentioned in the same sentence as BDB is an amazing honor. Of course now whenever I sit down at my keyboard, my hands shake from the pressure. JK. But, seriously, I hope that some day my Vârcolac warriors can instill the same sort of passion in readers.


I write in three romance genres, paranormal, medieval historical, and military suspense, and I love them all; changing it up keeps me fresh. So I might answer the question by focusing on what is my favorite “brand” to write. And gritty realism is something you’ll see throughout all of my genres. Not to worry, my stories are always full of hope, and, of course, end happily, but I like to write some scenes that I refer to as “car accident” scenes: you may think you don’t want to look, but then you can’t help yourself, and when you do…well, you’re kind of morbidly fascinated despite yourself.

Mutual pains in the butts.


I can’t recall exactly what inspired the series, but I remember really needing a break from the current manuscript I was working on. My roots aren’t in paranormal, so it was a welcome stretch for me. I think what really appealed to me about the genre was being able to create my own set of World Rules. Once those rules are set, I stick my characters into situations where they have to or want to break those rules for their emotional and/or physical wellbeing. But these are RULES, right, and so inherently unbreakable, which creates fodder for a lot of juicy tangles.
THE BLOODLINE WAR is the first book in The Community Series (end date undetermined), and I plan to keep readers satisfied. Book two, THE PUREST OF THE BREED, focusing on three characters from the notorious Nichita family, including smoldering Dev, and Book three, DEEP IN THE HEART, delving into the love life struggles of blond hottie Thomal Costache and scary Nyko Brun (you’ll know these great guys once you read the first book!), are already heading into edits.
All books in the series are standalone.


Not so much went into THE BLOODLINE WAR, but I had to research Romanian history for THE PUREST OF THE BREED in order to depict the Vârcolac breed’s forced exodus from that country. For DEEP IN THE HEART, I needed to learn how to read Tarot Cards, which is actually really difficult, and I suck at it. Incidentally, I offer a free short story to reviewers called “Lună Zână,” and that required a fair amount of research into Romanian mythology. Gotta keep things interesting, though; figure if I’m bored, readers are bored, and I hate to be bored.


Shucks, I imagine all authors put a little of themselves into their characters; we write what we know, you know. But basically, my characters are “created.” For me, the best part about that creation process is using my therapeutic background (my first life was as a counselor) to add depth to my characters’ psyches. I myself have a hard time connecting with “perfect” characters, and so I suppose I’m assuming other readers feel the same.
The theme of THE BLOODLINE WAR is “mutiny.” My heroine helps to stir up a rebellion against the Vârcolac (who need to be reminded they’re good guys at heart) with the other women who’ve been kidnapped into the community. In my first draft, I was so focused on the Jacken-Toni love story that I let that major theme slip. So the hard part was going back and making sure I did justice to that (thank God for editors).
The easiest to write was the first love scene between Jacken and Toni. I knew I wanted to capture a certain tone, and when my editor came back to me with: “I have voted this as the funniest, sweetest, dearest, HOTTEST sexual interlude I've ever read,” I knew I’d hit it!

In addition to juggling three genres, I’ve launched a reader-focused website called “The Character Couch” (www.charactercouch.com) where fans can go to nominate characters from a particular romance book to go into a light therapy session. I say “light” because these sessions aren’t angst-ridden, rather fun and snappy. In fact, when Susannah Sandlin, the author of OMEGA, which is the focus of this month’s Character Couch (a couple of vampires, by the way), previewed her session, she said she “spewed her Diet Coke” in LOL laughter.
So, yes, it’s been going well; authors are jumping on the bandwagon of this innovative way to market their books, and readers love the unique way to see their favorite couples.
Ahhhh, wine. If it’s good, I’ll drink it. Generally, summertime is for white and winter is red.

I guess I’d say listen to your instincts. One of the most difficult lessons I had to learn as an author was the willingness to throw out a scene that wasn’t working…no matter how much I believed it was “essential.” For me, if a scene is becoming too difficult to write, I have to recognize that my subconscious is telling me it doesn’t belong. The same might be true for other authors. Trust that sometimes your gut knows more about your story than your head.

Thank you again for taking the time for this interview. 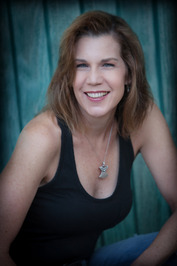 After earning a B.A. in Psychology and an M.A. in Marriage, Family, and Child Counseling, Tracy worked in the clinical field before becoming a full-time writer. Marriage to a Naval Aviator for over twenty-five years has provided fodder for her imagination, especially the tours she spent traveling the globe on diplomatic orders in Rome and Madrid. Now settled back in sunny San Diego, she writes gritty romance novels, spanning genres across paranormal, historical, and military suspense.

Tracy is also the founder and creator of THE CHARACTER COUCH (www.charactercouch.com), a reader-focused website designed to help fans keep in touch with their favorite fictional characters by providing fun monthly “therapy” sessions for a selected couple. Tracy’s a foodie and wine enthusiast, and when she’s not writing, she’s an avid dancer and tennis player. She has two children and a variety of pets at any one given time. 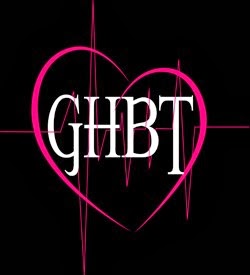