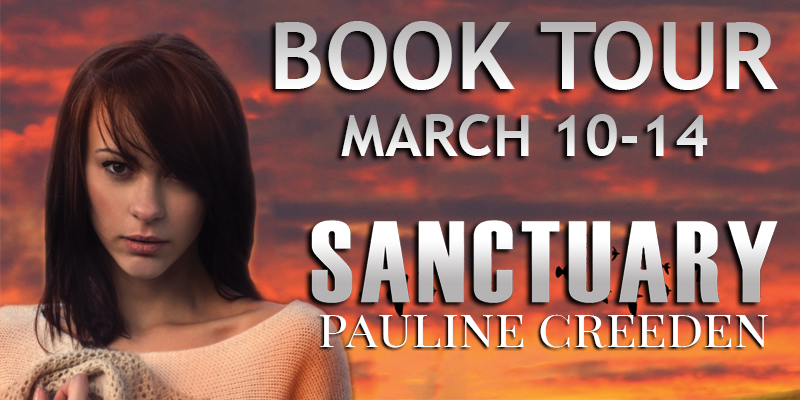 Welcome to the Official Blog Tour for Sanctuary by Pauline Creeden 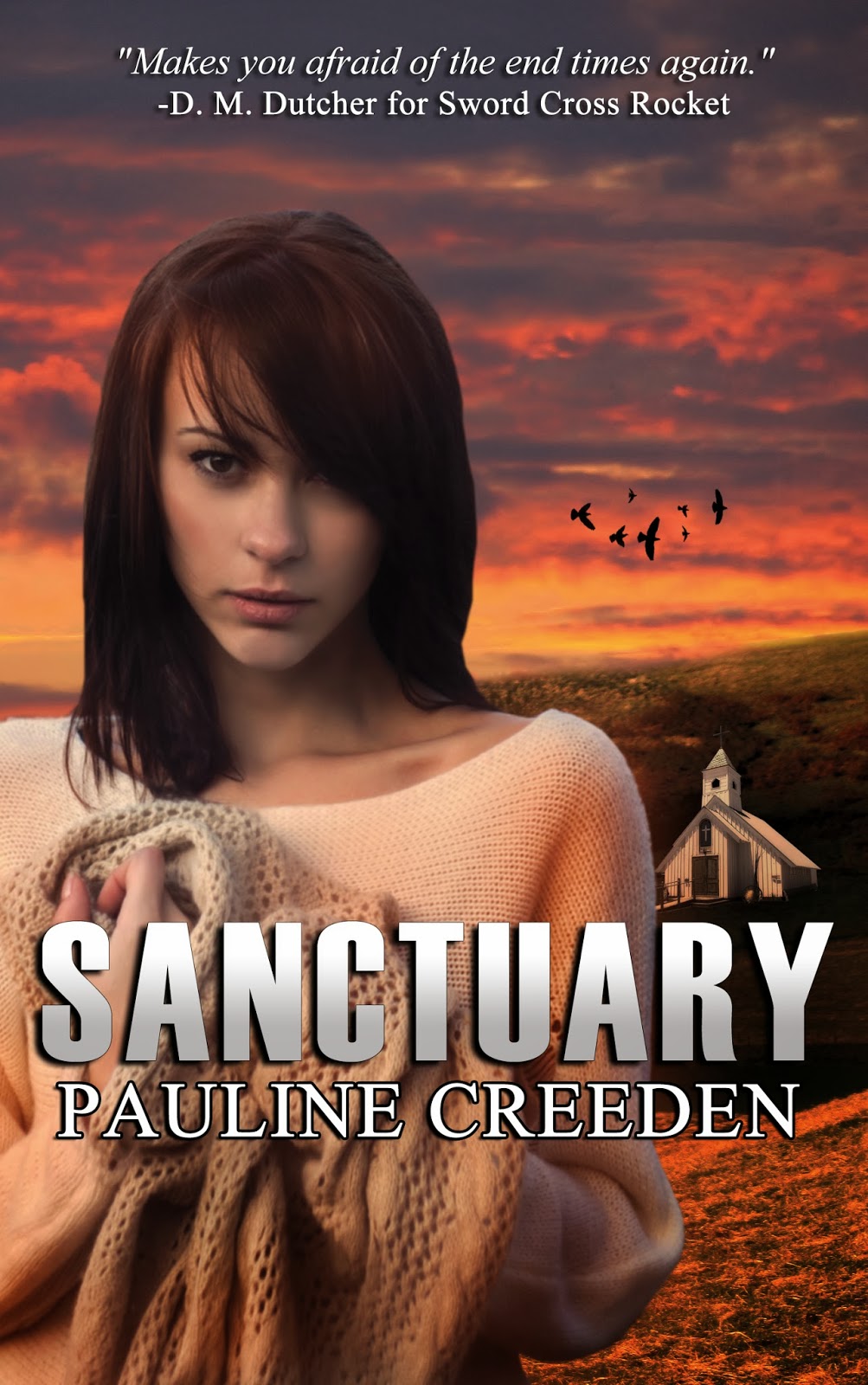 Summary from Goodreads:
In a heart-racing thriller described as Falling Skies meets The Walking Dead, Jennie struggles to find a safe place for what's left of her family. But it seems as though there is no place sacred, no place secure. First the aliens attacked the sun, making it dimmer, weaker, and half what it used to be.

Then they attacked the water supply, killing one-third of Earth's population with a bitter contaminate. And when they unleash a new terror on humankind, the victims will with for death, but will not find it... When the world shatters to pieces around her, will Jennie find the strength she needs to keep going?

*Excerpt*
Jennie filled the glass and set it on the counter. She needed an ibuprofen.
As she reached up to the top shelf in the pantry, a vibration started in her chest. Holding the white bottle in her hand, she turned around confused.
Like a jet when it flew too low, the rumble increased in intensity as it approached. Jennie watched the glass tremble on the counter top for a moment before fear clenched her stomach. “MOM!?”
She rushed to the sink and looked out the window, but her mother wasn’t in the garden any more. Jennie barreled through the kitchen, the vibrations in her chest like bass on a stereo. “MOM?”
When Jennie reached the back door, she saw them. Four large dog-like creatures with pinched faces like bulldogs and lion-like manes. They snarled, and one of them leapt at the window on the top half of the door when it saw her. Jennie jumped back and fell hard on the cold tile floor. The bottle of painkiller bounced across the kitchen tiles. The creature slammed against the window a second time, cracking it. She blinked hard. Her heart sunk, and the hairs on her arms stood on end. A horrendous gargling howl rent the air, causing a shiver down her spine. She held her breath and waited for the creature to slam into the door again.
“What on earth?” she whispered to herself.
When the third attempt never came, she scrambled toward the door. Blinking hard, she used the door knob to help herself stand. Out the cracked window, her mother was still out of sight, but the last of the dogs headed across the field behind her backyard.
“MOM?” Jennie called out.
The rumbling faded, and the vibrations in her chest receded with the dogs. She pulled open the door and rushed onto their back deck. “Mom, where are you?”
When she reached the banister, she looked over the side. Her mom lay sprawled with one hand on the lattice. Blood gushed from Mom’s leg and her opposite arm. Jennie’s ears rang and flooded with every beat of her heart.
Jennie didn’t know how she got to the second floor of her house, but she found herself shaking her sleeping father. How had he slept through the rumbling? “Outside, it’s Mom…”
Her father leapt from the bed. Mickey, her little brother, lay asleep and undisturbed. Dad ran down the stairs and outside in his flannel pajama bottoms and white t-shirt. He scooped Mom up to his chest and carried her inside. Blood stained his shirt in crimson.
“Jennie, call 911!”  Her father had said it at least three times before it finally registered in her brain.
She pulled the cell phone from her pocket, but it refused to connect. With a groan, she grabbed the cordless from the wall receiver, glad her heart stopped pounding in her head so she could hear.
“All operators are busy at this time,” a mechanical voice deadpanned, “Please stay on the line, and the next available operator will take your call.”
“They have me on hold, Dad. Should I hang up and try again?” She held the phone in both hands away from her face.
“No, just stay on the line.” Her father lifted the shredded jeans from Mom’s leg. “It looks like a shark bite. What on earth happened?”
Jennie took in the damage through tear-filled eyes. A huge chunk was taken from her mother’s calf, exposing the fibrous tendons that covered the bone in her leg. A bloodstain grew on the beige couch. Was she going to die? Panic rose up.
“What happened, Jennie?”
“I...I...They looked like lions, or dogs, or something. The rumbling shook the whole house…I tried to go outside to get Mom, but—” A sob blocked her throat.
Her father grabbed a throw pillow and held it against the leg. Mom’s exposed forearm laid across her chest in much the same condition as her calf.
“Grab me the duct tape.”
Jennie suddenly remembered the phone, put it back to her ear, and headed to the hall closet. She reached for the shelf above the jackets and grabbed the junk basket next to the toolbox.
"Please stay on the line. An operator will be with you shortly.”
She shoved the phone in the crook of her neck and fished through the box.  Half the contents dropped around her feet. Who cares? When her fingers wrapped around the silver duct tape, a short-lived relief sent prickles down her arms. But the urgency gripped her chest in less than a heart beat, and she threw the junk basket on the ground with the rest of the items.
“Hurry, Jennie!” her father called from the living room. “And turn on the TV. Maybe they’ll have something about what’s going on.”
She handed her father the tape and turned toward the TV. The mechanical voice on the phone came through again, followed by more easy listening.
When she clicked on the TV, the shouting and wailing began before the picture warmed up on the screen. A sideways picture of New York City broke through, with the shaky voice of the newscaster voicing over.
“What we are watching now – I can’t believe it – is live footage of Times Square,” the newscaster’s voice paused for a deep breath. “We’ve lost our man on the scene and his camera man to what appears to be some kind of new alien creature. Just a short half-hour ago, the doors to the ship that hovered above Central Park opened and these dog-like creatures flooded out.”
Jennie couldn’t pull her eyes from the screen. She straightened and dropped the
phone on the hardwood. The battery popped out and skidded across the floor.

In simple language, Pauline Creeden creates worlds that are both familiar and strange, often pulling the veil between dimensions. She becomes the main character in each of her stories, and because she has ADD, she will get bored if she pretends to be one person for too long.
Pauline is a horse trainer from Virginia, but writing is her therapy.
Armored Hearts, her joint effort with author Melissa Turner Lee, has been a #1 Bestseller in Christian Fantasy and been awarded the Crowned Heart for Excellence by InDtale Magazine. Her debut novel, Sanctuary was released September 30, 2013, and was nominated for two awards in YA Science Fiction.
One of Pauline's short stories has won the CCW Short Story contest. Other short stories have been published in Fear & Trembling Magazine, Obsidian River and Avenir Eclectia. An urban fantasy short will appear in The Book of Sylvari: An Anthology of Elves from Port Yonder Press, and a vampire short will appear in Monsters! from Diminished Media Group.

Rules and Restrictions:
Contest is void where prohibited. Entrants must be 13 or else have parent or guardian’s permission to enter. Winners will be notified via email and will have 48 hours to respond  or another winner’s name will be selected. Winning entries will be verified for authenticity.