Welcome to the Official Blog Tour for Caryn Larrinaga's Superhero Syndrome, the first book in the Solstice Survivors series! This tour will consist of excerpts and reviews from participating blogs! Today, we have an exciting sneak peek into the book with an excerpt... That's if you haven't read it yet. Anyways, to add to the blog tour fun, we have a tour-wide giveaway to share, too! So... Check it out and grab your copy today! 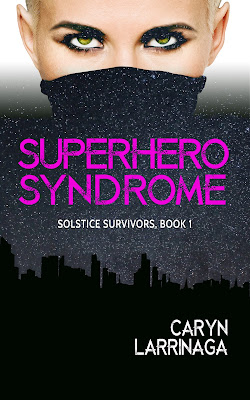 *Excerpt*
Chancing a glance over my left shoulder, I confirmed that the man was still behind me. His hands were tucked into the wide pocket at the front of his dark hoodie. We locked eyes, and fear stabbed my chest again. He dropped back a few paces, but when I turned my face forward again, I could still feel his stare boring into the back of my head. No. This wasn’t coincidence. He was following me.
My breath caught. I tightened my grip on the tiny canister of Mace, visualizing pulling it out of my bag, spinning around, and blasting it into his eyes. Was it even possible, or would I just spray wide, somehow managing to blind myself in the process?
Thin tendrils of panic began to creep around my organs. There was no way I’d be able to fight him off when he grabbed for me, and it had become a definite when in my mind. I wanted to walk more quickly, but I was terrified he’d realize I was onto him and that would spark him into making his move. Ahead of me, the white-and-blue banner of Helena’s Place glowed comfortingly in the twilight from the other end of the block. I knew that sign from the internet search I’d done while looking for an apartment. Safety lay just over that diner.
Don’t run, I cautioned myself. Act normal.
The word echoed in my mind. Normal. Normal. Normal. In an instant, it lost all meaning. There was no normal. There was just me, a tiny girl who was literally just skin and bones. And then there was him, this hulking monster with something in his hoodie pocket.
What’s he hiding in there?
I imagined a chloroform-soaked rag, a switchblade, or even a gun, and picked up my pace, nearly sprinting toward my building. I didn’t want to look behind me; I was sure if I did, I’d see his face inches from my own and feel his hand close around my wrist. But when I was within a few yards of my building, I knew I had to check again.
If he’s still following me, I decided, I’ll duck into the diner for help.
Eyes wide, I turned my head to look over my shoulder once more. He was still there, but he’d allowed the distance between us to grow so he trailed me by half a block. The tension in my chest loosened, and a sigh escaped my lungs.
And then the toe of my beat-up sneaker caught the edge of an upraised section of sidewalk, and I pitched forward. By instinct, my hands rushed upward to protect my face, and the rough concrete shredded my palms as I dove into it. My canister of Mace went flying, and I heard a faint clink as it landed in the street.
Footsteps thundered toward me from behind. I twisted my neck to see the man who’d been following me, now sprinting toward my prone body. 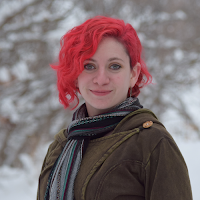