Nerd Blast time! Today and for the next five days, we are spotlighting and celebrating the release of Annalee Newitz's Autonomous! And, if you haven't gotten your copy yet, we have a sneak peek into the book with an excerpt! To add to this celebration, we also have a blast-wide giveaway to share! Check it out and grab your copy today! 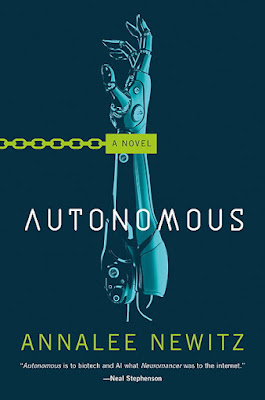 Synopsis:
Autonomous features a rakish female pharmaceutical pirate named Jack who traverses the world in her own submarine. A notorious anti-patent scientist who has styled herself as a Robin Hood heroine fighting to bring cheap drugs to the poor, Jack’s latest drug is leaving a trail of lethal overdoses across what used to be North America—a drug that compels people to become addicted to their work.

On Jack’s trail are an unlikely pair: an emotionally shut-down military agent and his partner, Paladin, a young military robot, who fall in love against all expectations. Autonomous alternates between the activities of Jack and her co-conspirators, and Joe and Paladin, as they all race to stop a bizarre drug epidemic that is tearing apart lives, causing trains to crash, and flooding New York City.

What Others Are Saying About Autonomous

"Autonomous is to biotech and AI what Neuromancer was to the Internet."―Neal Stephenson

"Something genuinely and thrillingly new in the naturalistic, subjective, paradoxically humanistic but non-anthropomorphic depiction of bot-POV―and all in the service of vivid, solid storytelling."―William Gibson

"This book is a cyborg. Partly, it's a novel of ideas, about property, the very concept of it, and how our laws and systems about property shape class structure and society, as well as notions of identity, the self, bodies, autonomy at the most fundamental levels, all woven seamlessly into a dense mesh of impressive complexity. Don't let that fool you though. Because wrapped around that is the most badass exoskeleton--a thrilling and sexy story about pirates and their adventures. Newitz has fused these two layers together at the micro- and macro-levels with insight and wit and verbal flair. Moves fast, with frightening intelligence." ―Charles Yu, author of How to Live Sagfely in a Science Fictional Universe

"Everything you'd hope for from the co-founder of io9 ... Combines the gonzo, corporatized future of Neal Stephenson's Snow Crash with the weird sex of Charlie Stross's Saturn's Children; throws in an action hero that's a biohacker version of Bruce Sterling's Leggy Starlitz, and then saturates it with decades of deep involvement with free software hackers, pop culture, and the leading edge of human sexuality." ―Cory Doctorow, New York Times bestselling author of Walkaway

Annalee Newitz is an American journalist, editor, and author of both fiction and nonfiction. She is the recipient of a Knight Science Journalism Fellowship from MIT, and has written for Popular Science, Wired, and the San Francisco Bay Guardian. She also founded the science fiction website io9 and served as Editor-in-Chief from 2008–2015, and subsequently edited Gizmodo. As of 2016, she is Tech Culture Editor at the technology site Ars Technica. Her books include Pretend We're Dead and Autonomous. 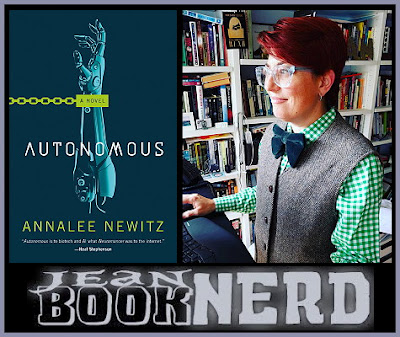 Note: Not Responsible for Lost or Damage Prizes in Your Mailbox
a Rafflecopter giveaway
Nerd Blast Organized by