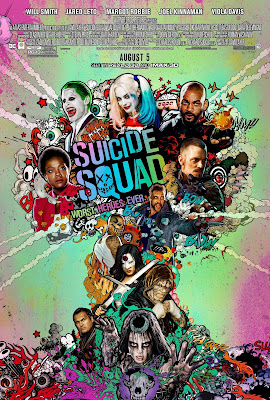 Based on Characters from:
DC Comics

Plot Synopsis:
It feels good to be bad... Assemble a team o the world's most dangerous, incarcerated Super Villains, provide them with the most powerful arsenal at the government's disposal, and send them off on a mission to defeat an enigmatic, insuperable entity. U.S intelligence officer Amanda Waller (Viola Davis) has determined only a secretly convened group of disparate, despicable individuals with next to nothing to lose will do. However, once they realize they weren't picked to succeed but chosen for their patent culpability when they inevitably fail, will the Suicide Squad resolve to die trying, or decide it's every man for himself?
source

Well, I'm finally going to get my thoughts down on Suicide Squad. Eh... Took me long enough..haha! Anyways, I enjoyed watching this, considering that critics didn't give it any real good reviews. Then, of course, "word of mouth" from friends whom watched it. So, I've heard it and read it... all on how bad and how good it was. Well, honestly, I have watched it a few times. I just never got to writing about it. <sigh>

So, first off, I thought it was an entertaining and "colorful" movie. Well, the casting was awesome. I did like the casting of these Super Villains. They also played it well. The setting was ominous and dark. It definitely set up the tone of the storyline/plot. I thought the way they tied it in with the other DC films was well done. It made sense to me. And, of course, I did watch the other films... so far. It would make sense to watch the other films anyways to be able to make sense of the scenes that makes that connection.

As for character development, considering how much was going on, I thought it was well done. It was enough as an introduction to these villains that need such extreme caution to keep them locked up. Yes, the film revealed a bit of each of their backgrounds; just enough to give viewers an overview of who they are. It definitely does set up for possible "solo" movies for these characters. After watching, I don't think it would be too far fetch to see solo films developed for these characters... And not just solo films, but a sequel to Suicide Squad. Oh wait... There is going to be a sequel... LOL! 😄

Suicide Squad was an entertaining and fun film filled with action and enough drama that made for an interesting storyline. It was, for sure, a good intro for these characters, and a good opening to see more of what the Suicide Squad can do.

Posted by Jasmine Albitos at 8:44 PM