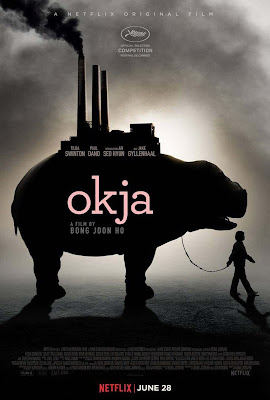 Plot Synopsis:
A gentle giant and the girl who raised her are caught in the crossfire between animal activism, corporate greed and scientific ethics.
source

I loved it! Okja is a sweet, but honest look at the realities of some issues occurring now. In particular, animal activism, scientific ethics, and corporate greed (as stated in the plot synopsis). Moreover, it was a touching tale of a young girl fighting for the life of her "friend," Okja! Well, she's more than a friend to her. Anyways, The prologue into the movie sets up the plot. The characters told the story with their convincing and realistic portrayals. And as for the effects, I thought it was well done! And, the cast played it well... 😄

It made my heartbreak. I know I was tearing up as I went along their journey as they faced those difficult obstacles. I was also rooting her on! I was also heartbroken watching the pain they endured. OMG! I got emotional. 😄

The cast is very convincing as their characters. The setting is beautiful. The story is... CONTROVERSIAL, to say the least. We see it every day, but this film has made it into art that should be watched and appreciated... then, let the viewers decide for themselves what they liked or disliked about it. I appreciated it. I appreciated the fact that this film strikes at all the controversies and censors that we see every day, and it evokes discussions and lessons. These are real issues. Anyways, there are other films, shows, even videos that reveal many things that relate to this story. But, I guess, each and every viewer that watches this should contemplate and judge for themselves.

Anyways, in the end, Okja is a heartwrenching and riveting "love" and coming-of-age story of a little girl learning the hard realities of life in relation to her fight to get her beloved Okja back. This was definitely well worth watching.

Posted by Jasmine Albitos at 11:01 PM