JASMINE's THOUGHTS on Rogue One: A Star Wars Story (2016) 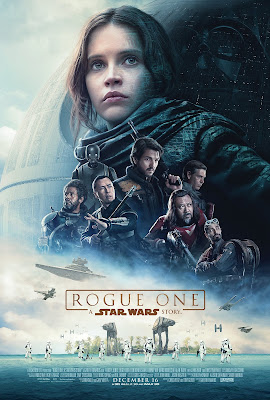 Based on Characters created by:
George Lucas

Plot Synopsis:
From Lucasfilm comes the first of the Star Wars standalone films, Rogue One: A Star Wars Story, an all-new epic adventure. In a time of conflict, a group of unlikely heroes band together on a mission to steal the plans to the Death Star, the Empire’s ultimate weapon of destruction. This key event in the Star Wars timeline brings together ordinary people who choose to do extraordinary things, and in doing so, become part of something greater than themselves.
source

I enjoyed watching this. It brought about a bit of nostalgia for the first three movies, not the prequels...haha! I guess the more recent naming would Star Wars: A New Hope (Episode IV). Well, those were the original films that I grew up watching. Anyways, I loved the storyline/plot, a branch connected to the story that many fans have grown up loving. Set in the same universe, Rogue Once makes that connection to our favorite characters of Princess Leia, Obi Wan Kenobi, Luke Skywalker, Han Solo... etc. etc. I guess this story lies smack dab in the middle of the first three (movies) episodes (the prequel films) and the next three (movies) episodes. Huh...interesting. The film dives into the history of the growing rebellion against the Empire. We got to know other characters that have become familiar from previous films. We got a bit more history behind the Death Star. It was all very interesting to see how this story connected to the characters and their story.

The casting was great. The setting fascinating and nostalgic. Even the effects were amazing, and yet stayed true to the nostalgia of the Star Wars timeline/series. But, the CGI visuals were obvious, but hey, I'm not going to complain about it. It was done as well as it can be done... at the time. Ha! Although the story is bittersweet, Rogue One connected and sets itself up for the next Star Wars episode. Other than that, Rogue One was a good movie with all the elements that made it exciting to watch.

Posted by Jasmine Albitos at 11:45 PM