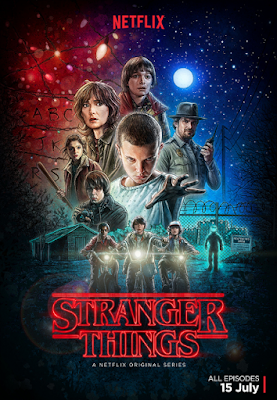 Plot Synopsis:
The story of a young boy who vanishes into thin air. As friends, family and local police search for answers, they are drawn into an extraordinary mystery involving top-secret government experiments, terrifying supernatural forces and one very strange little girl.
source

So... I finally watched it! And... I loved it! This show brought up a lot of nostalgia for all those horror, science fiction 80's flicks that I used to watch as a kid. I still would watch it on TV from time to time. Those were the classics, and Stranger Things definitely is a nod to all those great movies. No wonder some scenes throughout the season seemed familiar...haha! The series had all the elements expected, such as: mystery, suspense, horror, drama, the supernatural...even a little bit of comedy/humor. All these elements were balanced well and flowed smoothly. I loved the casting! There was well developed characters and settings.

Anyways, this first season definitely built up the storyline to its suspenseful and thrilling climax to the end. But, of course, there is that cliffhanger. There just had to be more...hmmm. The final episode definitely makes viewers wonder... Is it REALLY over?!? Well, the season finale made it apparent that there's more to it than what was revealed. Talk about mystery... Well, it was clearly enough to make me want to Season 2 to come sooner than October.

With a nostalgic (that is the word!) nod to all those 80's classic horror/sci-fi movies, Stranger Things is one series that is a must watch! The series has brought up a lot of the cool and awesome feels of those yester-years of watching those Stephen King and Steven Spielberg movies that I grew up with.

It's 1984 and the citizens of Hawkins, Indiana are still reeling from the horrors of the demogorgon and the secrets of Hawkins Lab. Will Byers has been rescued from the Upside Down but a bigger, sinister entity still threatens those who survived.

Posted by Jasmine Albitos at 3:47 PM