It's Nerd Blast time!! Yup! Today, we kick off this 5-day Nerd Blast for Heather Burch's Something Like Family! And... Today just so happens to be its release day! So... It's a happy book birthday!!! We will celebrate today with a sneak peek into the book with an excerpt AND a blast-wide giveaway!!! Check it out and grab your copy today! 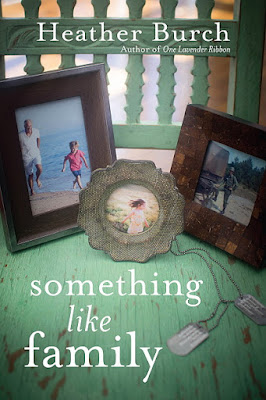 Synopsis:
Abandoned by his mother when he was young, twenty-two-year-old Rave Wayne knows all about loss. That doesn’t mean he’s used to it. After he’s dumped by the girlfriend he assumed he’d spend his life with, Rave is longing more than ever to connect.Then, as if by miracle, he receives an invitation from his grandfather, a man he thought was long gone, to come for a visit in rural Tennessee. Loyal, honest, and loving, dear old Tuck is everything Rave could have hoped for. He’s family. Soon, Rave finds himself falling for a down-to-earth local girl, and he thinks his life is finally coming together.But the past isn’t through with Rave. When his mother returns after many long years, looking to reconcile the terrible mistakes that once defined her, Rave struggles to put together the unsettled pieces of his heart. Will this once-estranged family be able to come together to understand the meaning of unconditional love, the fragile bonds of family, and the healing power of letting go?

“Rave Wayne?”
Rave stopped busing a table near the front door of the café. Marco, his boss, had been mad at him about last night’s fight, and right now, the last thing Rave needed was some attorney drawing attention to him. And the guy in the gray suit with the bad comb-over and sweaty forehead was definitely an attorney. “Yeah?”
The man motioned to the seat across from him. “Could I have a few moments of your time?”
Rave chewed his cheek. “Sorry, all my moments are spoken for.” Dishes clanged together as he took the full bin into the kitchen, then tried to make a quick escape. Rave headed out the front door, still untying the dingy white apron around his hips. The night air was warm but fresh. Early spring in Tampa had temperatures in the eighties, but he didn’t mind. He had parked at the end of the building because his car was a heap, and Marco preferred that it not sit in the front. Or in the light of the street lamp.
He knew the second the guy rushed out of the café to follow him. At least they could have their conversation outside. “Mr. Wayne?”
Rave nearly laughed out loud. He propped his weight against his car door. The tired old girl groaned a little when he did. “Yes?”
“I was sent here by Tuck Wayne. Do you know that name?”
“Nope,” Rave said, but his heartbeat quickened. Other than his mother, he didn’t know anyone who shared his last name.
“He hired me to find you. He’s your grandfather. He’d very much like to meet you.”
The world swirled around Rave, and he was thankful for the metal car door behind him. He shook his head. “I don’t have any living relatives. If I did, I’d know it.” His hands were sweating, and Rave felt a fight-or-flight instinct coming on. He opted for flight and got into his car before the man could stop him.
Through the closed window, he heard muffled words. “How would you know, Rave? From your mother? She was a sick woman, delusional, even. Isn’t there the smallest chance she could have lied—”
Seriously? This guy he just met wanted to stand at his window and pass judgment on Rave’s mom? No. Rave flew out of the car and grabbed the attorney’s shirt. “You don’t know anything about my mother.” But then a thought struck him, and he let the man go. “Do you? Is there news about her?” He knew there wasn’t. In his heart, he knew his mother was dead.
“No. I have no news of her whereabouts or status. But what I do have is an invitation from the man who raised your mother. He would very much like to get to know you, Rave. You’re all the family he has left.”
The words spiked through his system. Leaving jagged slivers as they went.
The man added, “And he’s all the family you have.”

“Engrossing and genuine, Something Like Family pays tribute to the bonds of love we often fray, but always hold dear. The uplifting story of Rave and Tuck will leave an indelible mark on your heart.” —Christine Nolfi, bestselling author of Sweet Lake and The Comfort of Secrets

Heather Burch is a #1 bestselling author of contemporary fiction. She lives in Southern Florida with her husband, John. Her title, One Lavender Ribbon was in the top 100 bestselling books for the year on Amazon. In 2014, she became one of the most quoted authors by Kindle readers. Her deeply emotional stories explore family, love, hope and the challenges of life. Her books have garnered praise from USA Today, Booklist Magazine, Romantic Times and Publisher’s Weekly. Heather lives to tell unforgettable stories of love and loss—stories that make your heart sigh. 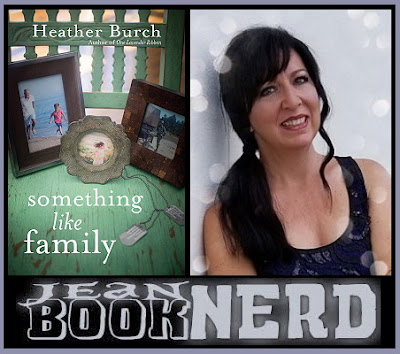