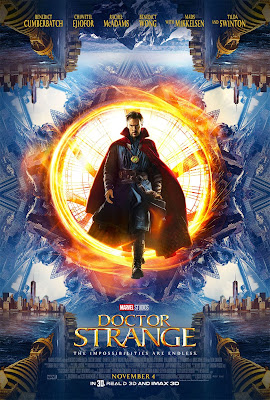 Based on the Characters from:
Marvel Comics

Plot Synopsis:
From Marvel Studios comes Doctor Strange, the story of world-famous neurosurgeon Dr. Stephen Strange whose life changes forever after a horrific car accident robs him of the use of his hands. When traditional medicine fails him, he is forced to look for healing, and hope, in an unlikely place—a mysterious enclave known as Kamar-Taj. He quickly learns that this is not just a center for healing but also the front line of a battle against unseen dark forces bent on destroying our reality. Before long Strange—armed with newly acquired magical powers—is forced to choose whether to return to his life of fortune and status or leave it all behind to defend the world as the most powerful sorcerer in existence.
source

Well, this was definitely a mind-bending experience...haha!! This reminded me a lot of Inception. Other than that, Doctor Strange was mystifying and magical to watch. Casting was interesting. Heard the complaints, irregardless, Hollywood will cast whomever they want. It would be nice if films would be cast as is described as what is written. <sigh> Otherwise, I did like the casting of this film; regardless, to the complaint of the lack of diversity. Hollywood still has to work on that. Oh well. Let's not get into the "politics" of it... lol! Anyways, it was still a good movie...lol!

This was pretty much an intro movie on this character. Like all the other films, Doctor Strange connects and crossovers to all those other Marvel films, one which was named in the film was Avengers. But, of course, there are more connections. The storyline/plot flowed smoothly as it told the story of Dr. Stephen Strange, and his difficult and painful journey to becoming Dr. Strange.

Well, the cinematography and effects, I guess, was mind-blowing. The illusions of the twisting, folding, and inverting of places, space, and time, was incredibly dizzying. Almost went cross-eyed...haha! But, it did its job in getting viewers (well, me) "hypnotized" into the movie.

Again, Doctor Strange sets up, yet another storyline, another character into the Marvel Universe. Anyways, I thought Doctor Strange had all the elements that fans would expect for a Marvel film.

Posted by Jasmine Albitos at 9:50 PM