BLOG TOUR: When I Cast Your Shadow by Sarah Porter

Welcome to the Official Blog Tour for Sarah Porter's When I Cast Your Shadow! Just released, September 12th, we celebrate this release with this tour spotlighting various reviews and other posts from participating blogs! Plus we have a tour-wide giveaway to share as well! So... Follow the tour, HERE! Check it out and grab your copy today!

Synopsis:
A teenage girl calls her beloved older brother back from the grave with disastrous consequences.
Dashiell Bohnacker was hell on his family while he was alive. But it's even worse now that he's dead....
After her troubled older brother, Dashiell, dies of an overdose, sixteen-year-old Ruby is overcome by grief and longing. What she doesn't know is that Dashiell's ghost is using her nightly dreams of him as a way to possess her body and to persuade her twin brother, Everett, to submit to possession as well.
Dashiell tells Everett that he's returned from the Land of the Dead to tie up loose ends, but he's actually on the run from forces crueler and more powerful than anything the Bohnacker twins have ever imagined....

*Excerpt*
There’s always an eye to be kept on the darkness that loosed me: an eye for movement, an ear tuned to the chance of footsteps or breath. Distractions abound in my current environs: at the moment fingers are lathering her hair and bubbles skid down her wrists. On her pale thigh liquid fireworks burst, fantastically brilliant after my long stretch of sensory deprivation. I could forget to pay attention to what’s back there, drugged by the sensual intricacy of being so alive in my dear sister’s skin. Warmth, saliva, drumming blood.
And then there’s the thrill when she feels me: my thought sliding over her thoughts, mind whispering on her mind. The living have their lovers, their children, but they never have anyone the way I have her now. She stops washing her hair; she leans against the tiles and closes her eyes.
“Dashiell?” A long hesitation. “Are you there?”
Soon enough, Ruby-Ru. Soon enough I’ll answer the question. Be patient for now, sweet one.
Because out there in the shadowy places someone is coming. I can feel the vibrations of someone still alive, straying on the margin where death overlaps dreams. Where do they come from, I used to wonder, those strangers we glimpse in the deepest alleys of our sleep? Now I know.
But out there now it’s your twin brother’s footsteps, Miss Slippers. He’s already storming toward the same scaffold where he fell before, stomping as he goes, refusing to let himself so much as glance to the side. Coming to save you, he tells himself, but the truth is that he’s raging with jealousy that you will never love him as you love me. Coming to save you from me, when you are so utterly mine that the idea of extricating you is beyond absurdity.
“Dashiell? You died, I know you died. So why do I keep feeling—”
Hush, Ruby-Ru, Ruby-Ru. Don’t cry.
There’s something I have to attend to now. But I’ll be back with you very soon.

What Others Are Saying about When I Cast Your Shadow

"Porter offers a poignant consideration of how far we will go for the people we love." ―School Library Journal, starred review

"A wildly innovative, whip-smart, and utterly spellbinding testament to family, memory, and love―and the messes and miracles of each―poised to possess legions of readers." ―Booklist, starred review

"A haunting tale of possession that explores the ghostly landscape of dreams and nightmares―but more importantly, the particular dynamics among siblings, both oppressive and redemptive." ―Kirkus Reviews 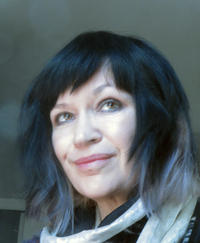 Sarah Porter is the author of the Lost Voices Trilogy (Lost Voices, Waking Storms, The Twice Lost) in addition to Vassa in the Night—all for the teen audience. For over ten years she has taught creative writing workshops in New York City public schools to students in grades K-10. Porter also works as a VJ, both solo and with the art collective Fort/Da; she has played venues including Roseland, Galapagos, Tonic Joe's Pub, The Hammerstein Ballroom, The Nokia Theater, and the Burning Man festival.

She lives in Brooklyn with her husband and two cats.

When I Cast Your Shadow by Sarah Porter was a ghost story with very little twists on the insight of life after life. As mundane as that sounds, I enjoyed this book that delved into the emotions and thoughts of its characters not matter how annoying they may have seemed. Each chapter was not given a number. Instead, the title was the name of each character who was currently speaking. The story itself was strikingly realistic because it is a family in distress. Dash fell off his high horse, Ruby wasn’t the perfect child her father thought she was, Everett was an insecure little dork with pent up anger, and side characters showed how unimportant they really were. The story developed slowly and revealed more about Dashiell after every chapter until it reached its tepid ending.

Each character had their inner demons, insecurities, but most of them dealt with the loss of Dashiell Bohnacker. I think I liked Everett the most out of Porter’s characters, many of the others were annoying and two dimensional like Paige Kittering and Elena. Everett Bohnacker was the typical middle child, overlooked, feeling overshadowed by his siblings, and probably the most sensible child of the three Bohnacker siblings. He was an insecure teenage boy that saw his brother for the drug addict that he was, he knew how hopelessly devout Ruby was to him, and he was perceptive to his family’s emotional states. Sarah Porter wanted to write a chapter as a naïve, innocent teenage girl and that is what I got. Ruby Bohnacker is an adolescent, grief stricken, and a sickeningly blind follower of her beloved older brother, Dashiell Bohnacker. Sometimes she was too unbelievably sweet and devout to Dash but strangely, I could see that kind of devotion in a contemporary teenage girl’s head.

Overall, I will take a star away for a predictable ending, useless side characters, transparent antagonists, and half a star away for laughable death threats that wouldn’t scare a child. Without giving up all the minute details of the story, I would say When I Cast Your Shadow was a good night time story but not one I would read again. Everett was probably the high light character if Dashiell and his problems were not pushing the story forward.