JASMINE's THOUGHTS on The Kiss of Deception (ARC) by Mary E. Pearson

Synopsis:
In this timeless new trilogy about love and sacrifice, a princess must find her place in a reborn world.

In a society steeped in tradition, Princess Lia's life follows a preordained course. As First Daughter, she is expected to have the revered gift of sight--but she doesn't--and she knows her parents are perpetrating a sham when they arrange her marriage to secure an alliance with a neighboring kingdom--to a prince she has never met.

On the morning of her wedding, Lia flees to a distant village. She settles into a new life, hopeful when two mysterious and handsome strangers arrive--and unaware that one is the jilted prince and the other an assassin sent to kill her. Deception abounds, and Lia finds herself on the brink of unlocking perilous secrets--even as she finds herself falling in love.

Today was the day a thousand dreams would die and a single dream would be born.
The wind knew. It was the first of June, but cold gusts bit at the hilltop citadelle as fiercely as deepest winter, shaking the windows with curses and winding through drafty halls with warning whispers. There was no escaping what was to come.
For good or bad, the hours were closing in. I closed my eyes against the thought, knowing that soon the day would cleave in two, forever creating the before and after of my life, and it would happen in one swift act that I could no more alter than the color of my eyes.
I pushed away from the window, fogged with my own breath, and left the endless hills of Morrighan to their own wor- ries. It was time for me to meet my day.
The prescribed liturgies passed as they were ordained, the rituals and rites as each had been precisely laid out, all a testament to the greatness of Morrighan and the Remnant from which it was born. I didn’t protest. By this point, numbness had over- taken me, but then midday approached, and my heart galloped again as I faced the last of the steps that kept here from there.
I lay naked, facedown on a stone-hard table, my eyes focused on the floor beneath me while strangers scraped my back with dull knives. I remained perfectly still, even though I knew the knives brushing my skin were held with cautious breaths. The bearers were well aware that their lives depended on their skill. Perfect stillness helped me hide the humiliation of my naked- ness as strange hands touched me.

Mary E. Pearson is the author of bestselling, award-winning novels for teens. The Miles Between was named a Kirkus Best Book of the Year, and The Adoration of Jenna Fox was listed as a Bank Street Best Children's Book of the Year, an IRA Young Adult Choice, NYPL Stuff for the Teen Age, and a School Library Journal Best Book of the Year. She is also the author of A Room on Lorelei Street, David v. God, and Scribbler of Dreams. Pearson studied art at Long Beach State University, and worked as an artist before earning her teaching credential at San Diego State University. She writes full-time from her home in Carlsbad, California, where she lives with her husband and two dogs.

I was give an Advance Reader's Copy by Mary E. Pearson herself when I met her at Ontario's 4th Annual Teen Book Fest 2014. And what a fun day that was. When she described what this book was about, I was intrigued and eager to read it, so I accepted this ARC in return for an honest review. I am so glad that I did accept. In addition to Mary signing my books and this ARC, I even got a couple of signed bookmarks that I will giveaway at the end of this review.

I was absolutely blown away with the story! I was taken on a journey through a world dictated by duty and tradition. Sometimes, conformity can be suffocating which seems to be the case for our main character Lia. Growing up sheltered, Lia has no idea what awaits her when she flees her home on her wedding day. But with her strong will and determination, Lia starts a new life for herself. Truth be told, that was not going to stay simple too long when in comes two strangers, the prince and the assassin. All kinds of deceptions and secrets abound as we find our characters learning that their tasks at hand are not as simple as they thought it would be.

I loved the well developed and descriptive characters that she created in this story. I even thought it clever that the identity of the prince and assassin was kept hidden until it was too late. Wow! I was thrown for a loop there...hahaha! I had my suspicions, but wasn't sure. Told in three points of view...yes, three! We have Lia, the prince and the assassin's points of view throughout the novel. The clincher that gets you is when the prince and the assassin is named, but you just don't know who's who. It was absolutely gripping to think I figured it out, then later I didn't. The moment it was revealed who were the prince and the assassin, my reaction was...WHOA! Really!!??!! Wow! Yup! That was my reaction...hahaha! Mary definitely kept me in the dark with her incredible writing!

I also enjoyed that Mary took the time to create a descriptive setting allowing me to imagine this world that Lia is running from and living in. I especially enjoyed that, with each turn of the page, I got to know these three characters...and other characters. Each of Mary's characters had individual and distinct personalities that definitely stood out. There's a lot more to these characters than what is on the surface. Just like in the title, this journey/plight Lia is on is filled with deceptions, secrets and mysteries that she only has begun to unravel. I seriously couldn't put the book down...if I could help it.

The Kiss of Deception is filled with action, adventure, mystery, suspense, and romance that left me breathless and eager for more. I would even have to say that it could even be a coming-of-age story, since as Lia creates a new life away from from royalty, she comes to learn a great deal throughout the book. But, the end...really! I caught my breath at the end...and maybe a sigh of relief. We are left with a cliffhanger! I was left hungry for more...Now, it's going to be an excruciating wait for Book two...hahaha! 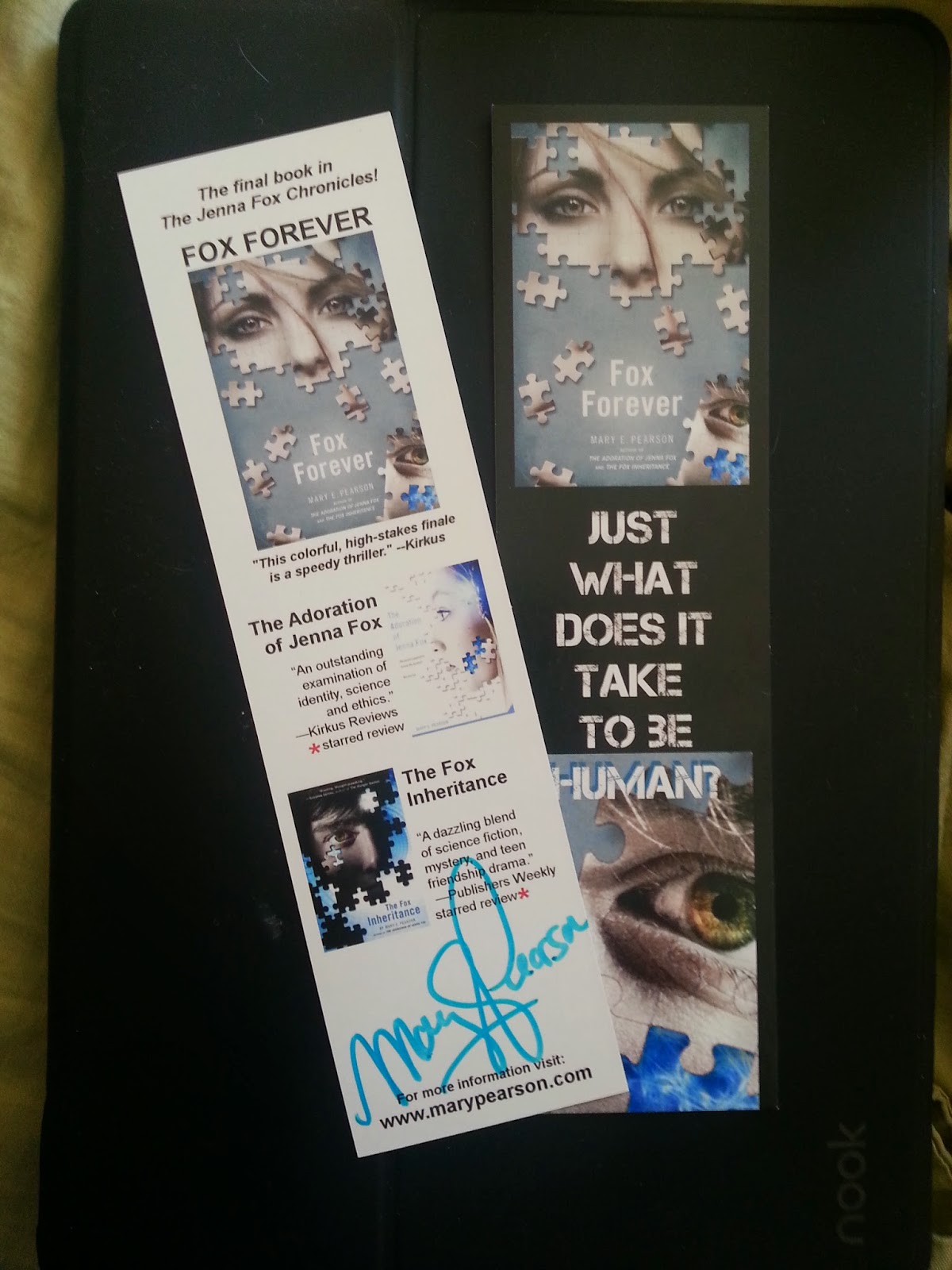 2 Winners will receive a Bookmark signed by Mary E. Pearson

Posted by Jasmine Albitos at 4:32 PM