BLOG TOUR: All Lined Up by Cora Carmack

Welcome to the Official Blog Tour for All Lined Up, the first book of a new series, Rusk University series, by Cora Carmack! 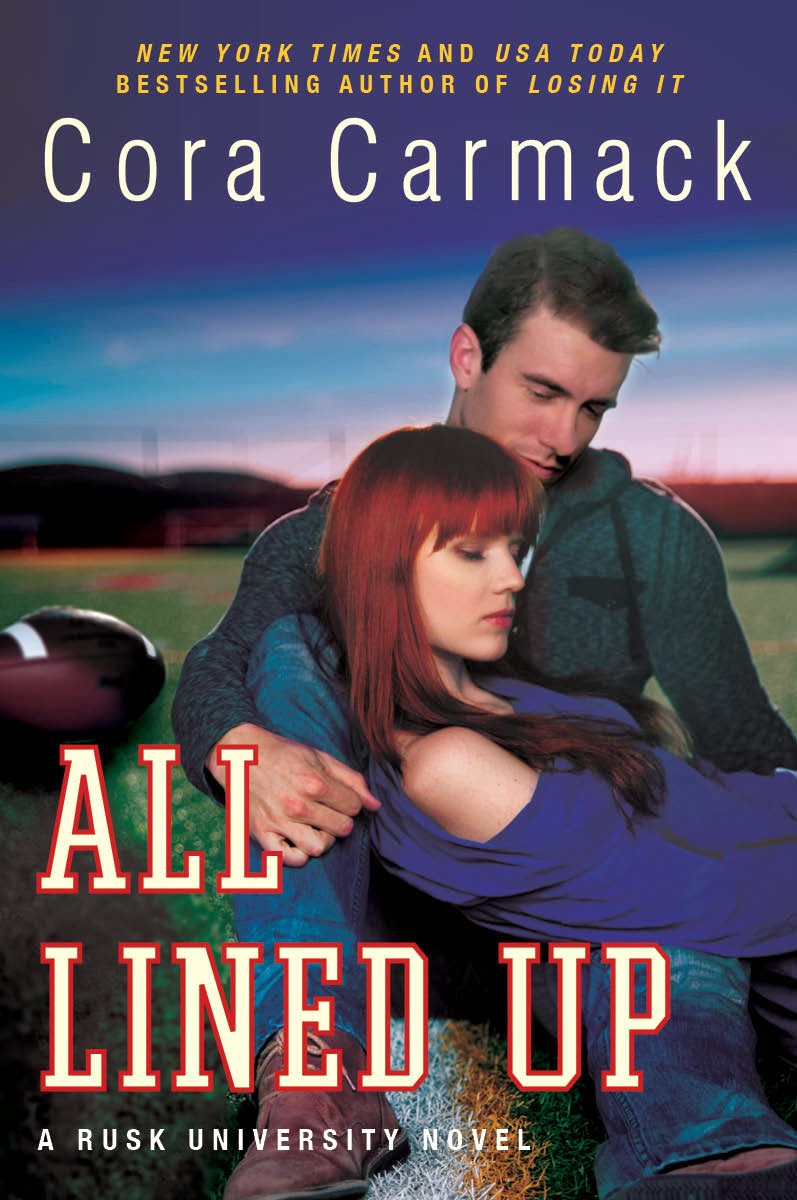 Synopsis:
In Texas, two things are cherished above all else—football and gossip. My life has always been ruled by both.

Dallas Cole loathes football. That's what happens when you spend your whole childhood coming in second to a sport. College is her time to step out of the bleachers, and put the playing field (and the players) in her past.

But life doesn't always go as planned. As if going to the same college as her football star ex wasn’t bad enough, her father, a Texas high school coaching phenom, has decided to make the jump to college ball… as the new head coach at Rusk University. Dallas finds herself in the shadows of her father and football all over again.

Carson McClain is determined to go from second-string quarterback to the starting line-up. He needs the scholarship and the future that football provides. But when a beautiful redhead literally falls into his life, his focus is more than tested. It's obliterated.

And neither of them knows how to walk away from the attraction they feel.

*Excerpt*
Fun. I need to have some. Stat.
Decided, I open the door quietly, smile situated on my lips, expecting to find Silas waiting, but he’s nowhere to be seen.
Walking back toward the stairs, I see him, hands braced on the railing and talking with someone a few steps down.
“Come on. Give me one hint,” Silas says.
The answering voice is familiar, and immediately I feel sick.
“Dude, it took me years to get in her pants.” Levi. Freaking Levi. “No way I’m giving you an easy in. And no way you’re managing it in one night. She’s an icebox, man.”
I shiver. Like I really have been coated in ice.
Silas chuckles before replying, “Oh ye of little faith.”
“Oh ye of little chance.”
“Whatever,” Silas says. “If she gave it up to high school you, all farm fresh with zero game, she can’t be that tough.”
They talk about me like I am some play to master, a team to beat. I probably matter less to them than their helmets and pads. And, oh yes, I have no doubt now that Silas is on the football team. Levi wouldn’t be hanging out with him if he weren’t.
My heart drums in my ears, and my mouth waters in that way that usually means I’m about to be sick. I don’t scream, even though it would be satisfying. Nor do I pick up the vase on the hallway table and test out how my Angry Birds skills translate to real-life target practice.
Instead, I calmly walk the length of the hallway and escape into an empty bedroom. I breeze past a few twin beds and head straight for the French doors that open up to a balcony on the far side of the room.
Emerging into the surprisingly cool evening air, I close the door behind me, sucking in a lungful of refreshing air.
Then I scream.
Not the shrieky, ear-shattering kind. Lower, more guttural. Like a battle cry.
Gripping the balcony railing, I stand up straighter, like I would if I were standing at the barre in my dance studio, and I let it all out.
Already I feel better.
A few seconds of precious silence passes, filled only by the faint echo of my scream. Then below me a voice calls out, “I’m going to go out on a limb and guess that you’ve decided against going Greek.”