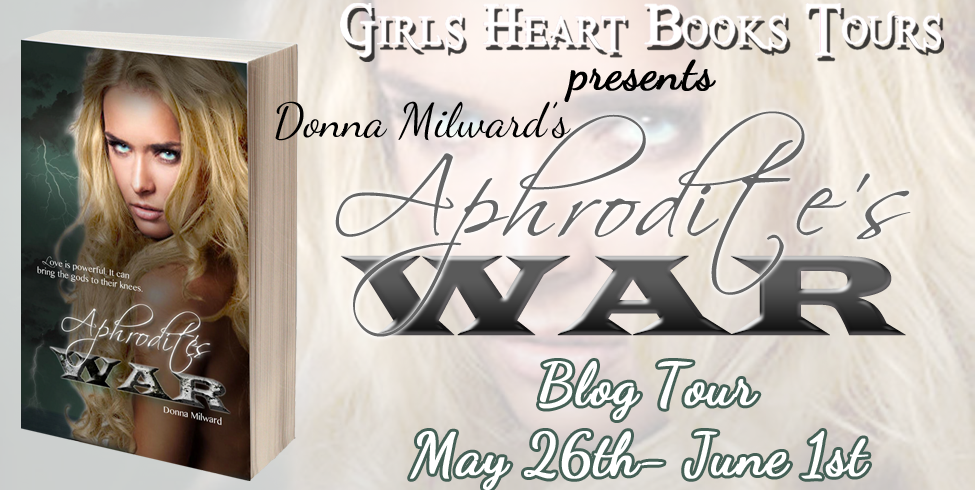 Welcome to the Official Blog Tour for Aphrodite's War by Donna Milward!

Synopsis:
Aphrodite despises Aries and when Zeus proposes a contest, the prize being expulsion of her enemy from Olympus, Aphrodite cannot resist. The catch: should Aries prevail it is Aphrodite who must leave her home. Risks aside, she cannot refuse the possibility of a future without her former lover. The challenge: two mortals must fall in love. It is simple. However, the players could not be more ill-suited. Poetry, a free spirited artist, and Adrian, a defense attorney, would not normally choose one another. But when gods interfere anything is possible.

*Excerpt*
If I were the pretty-boy offspring of a prissy, naïve love-goddess-whore where would I be?
To her left were more businesses: a dental office, nail salon, and a florist on the end. Her head throbbed with his presence.
She remembered Hermes carrying his basket of roses, not to mention the golden logo seen around the world representing flower delivery bore a strong resemblance.
Eureka. Some people never changed tactics. Predictability will get you killed, Hermes.
Strife yanked the door open, nearly tearing it from the hinges. Chimes jangled in protest.
A pair of scissors flew past her head. She heard the loud chunk as they embedded themselves in the wall.
“Is that so, Strife?” Hermes crouched behind the till. He’d recognized her as well, now he had her at a disadvantage. “So will barging into a man’s domain when he knows you’re coming.”
“This ends here.” She pried the blades from the wooden frame with a tortured squeal. “You’ve interfered with my work long enough.”
“Are you sure that’s wise?” A small paring knife sliced the air, but Strife dodged before it could strike her left eye. “I am Ares’s son, after all.”
Strife snorted. She aimed the scissors for Hermes’ face but missed. “He donated his seed, nothing more. You are a disappointment to him. He won’t protect you from me.”
“I don’t need protection from you.” Hermes edged backward, and Strife made ready to strike. “You’re just his whipping-bitch underling, begging at his feet for scraps and cock.  Ares only kept you because my mother had more respect for herself than to tolerate his abuse. “
Strife shrieked, vaulting onto the counter in a single leap. She perched like a gargoyle, hissing her rage as Hermes fled.
She pounced on his back before he could escape.


“I’ll kill you,” Strings of spittle flew from Strife’s mouth. “I’m going to snap your neck.”

*Donna's Top Ten Favorite Things About Being a Writer*

~ Having an outlet for the weird crap that goes on in my brain.
~ Sense of accomplishment I get from finishing and publishing a novel.
~ I make my own hours.
~ It’s fun...Even when it’s hard.
~ I feel like i do something interesting and unique for a living.
~ Meeting other writers.
~ When someone you’ve never met tells you they love your work.
~ That moment when you hold YOUR novel in your hands.
~ I like doing interviews and stuff like this.
~ This is a job I can do for the rest of my life and not get bored. It’s never the same writing day twice.

Donna Milward lives in Edmonton, Alberta in a tiny house with a huge yard. She’s been writing all her life, but decided to put writing on hold to get ‘a real job’ as a meatcutter and build a future with her beloved troll, Dan and her cats Freya, and Spartacus Jones.

Twelve years later, an invitation to a Romance Writer’s Conference in Washington D.C. led not only to new friends and new knowledge, but to the inspiration to write again. Thoeba was completed the following year.

Donna likes to mix her fascination with reincarnation and all things paranormal with her love of mythology in her work, and has even written her own myth ‘The Sacred Truth” (on earthtothoeba.blogspot.com) as the lore behind Thoeba and future novels to come.
Donna enjoys fishing, gardening and canning. Despite these hobbies, she much prefers city life.

Giveaway Open to U.S. Only 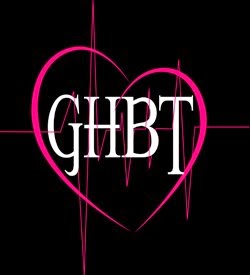