JASMINE's THOUGHTS on The Master of Edaun: Blood of Brothers by D.E. Hendley Jr. 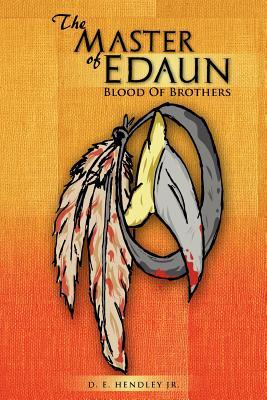 Synopsis:
'The righteous warriors shall prevail!'

Three men meet in the military. The men discover from each other their lives mirrored each other. Each an, Native Americans and taught the artistry of weapons and the visions of medieval warfare. Odd each discovered the others grew up the same way. Yeah all had twisted crazy fathers, right? To top it all off they each enjoy the life as knights and swordsmanship.

After their stints in the military, they decide to join together as archaeologists. During one of their digs, they discover another world. A world where evil rules. These long time friends journey deep into a world where evil has taken over. Was their fathers seers of the future? Or do things really connect?

Human kind has not woven the web of life. We are but one thread within it. Whatever we do to the web, we do to ourselves. All things are bound together. All things connect...
- Chief Seattle -

D.E. Hendley Jr.
D.E. Hendley Jr. is from the midlands of South Carolina. Married with three children and six grands. And two crazy dogs. The Master of Edaun: Blood of Brothers is the first in my action and adventure book series.

I hope you enjoy reading my book as much as I enjoyed writing it's story.

I received a paperback copy for an honest review. And I am happy that I did read The Master of Edaun: Blood of Brothers by D.E. Hendley Jr. A book worth reading if you want to go on an adventure to another world.

The Master of Edaun: Blood of Brothers is an action-filled, sci-fi fantasy about friendship and how strong that kind of bond it is..be it among friends and/or among siblings. It was a slow read, at first, for me as I got accustomed to D.E. Hendley Jr.'s style of writing. I did enjoy that the author took time to develop each character as each played an important role in the story. With the descriptive telling of the setting, it was as if I went through the "doorway" with them. I was intrigued with the Native American mysticism woven into the story of three Native American men brought together during their time in the military to find that they share similar pasts. In addition to the friendship of these men, the story also tells of the bond of Scottish brothers. These men enter into an adventure for the fight for freedom in a world that somehow they are connected to.

I really don't like revealing too much and spoil it for those interested in reading it; hence, I share my thoughts on it. The Master of Edaun: Blood of Brothers would be an intriguing read for fans of the sci-fi, fantasy, action/adventure, and paranormal genres. Unlike other stories, this does not revolve or involve any sort of romance with the characters...which was a nice break from many current reads. However, I felt that the book needed some editing...other than that it was a good read.

The Master of Edaun: Blood of Brothers is an exciting and adventurous beginning to a brand new series by D.E. Hendley Jr.!

Posted by Jasmine Albitos at 9:50 AM