BLOG TOUR: Somewhere With You by Britney King

Welcome to the Official Blog Tour for Somewhere With You by Britney King! 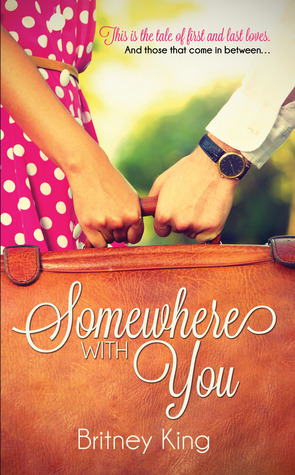 Synopsis:
This is the tale of first and last loves. And those that come in between...

Jack Harrison is a relentless overachiever who leaves little in the way of compromise. A businessman to the core--he's hell-bent on being at the top of the food chain. After all, no one can trip you up if you're on top, as he likes to say. The problem for Jack is there's only one thing that continually trips him up--and that's her.

Amelie Rose, with a name like poetry and a heart of gold, as her father always said, is a free-spirited photographer who has managed to land a job at one of the top travel magazines in the world. This is both a blessing and a curse since Amelie never stays in one place for long and has refused to commit to anything--ever.

It might seem to the casual observer that these two have almost nothing in common. But fate would disagree. The story chronicles Jack and Amelie's lives from childhood into adulthood, beginning when they meet as then eight- and ten-years-olds at summer camp specifically designed for children who've lost too much.

As fate steps in, and that first summer seals the deal, they come to depend on each other in ways neither of them expected, with each summer bringing them closer than the last. As they come to terms with life and loss, with hanging on and letting go, they'll teach each other that some bonds are meant to last. Together, they will travel the world, meeting in various places where they'll come together, and fall apart, all the while struggling to discern if the other could possibly be the one.

This unlikely love story takes us on an adventure where two people come of age, fall in and out of love, and question the role timing plays in it all. Their story is proof that neither time nor distance--perhaps not even death--can destroy what love creates.

*Excerpt*
Jack had been thinking of the letters when the girl’s voice caught his attention. Although he was pretty sure she wasn’t here last summer, he’d never paid much attention to whatever it was they discussed in their little powwow they held over there—but this time he found himself anxious to hear what she had to say. Whatever it was he was going to use it to destroy her. To crush her once and for all. Keep her out of his business, out of his life, out of his thoughts. Once is all it’d take, he knew this all too well. He watched as she stood and addressed the group. She was peppy, confident even—although not overly so. The good news was this was her weakness. It left room for people like him to create cracks, to manipulate the situation. But at the same time, she was the optimistic type. Nothing seemed to keep her kind down for long, and he hated her for that. These types of people were the worst.

Jack leaned back in his chair, crossed his arms, and observed as she casually flicked her blonde ponytail over her shoulder. She paused, looked up, and smiled directly at him. It was an evil smile with a lie behind it. That much Jack knew for sure. Whatever she was about to say, it was going to be stupid. He was going to hit the jackpot later when he rubbed it all in her face. As she spoke up, her voice cracked a bit but she recovered quickly. “I’m Amelie and I’m eight. This is a poem I wrote in honor of my dad. He was a famous poet. But now he’s just dead.”
The counselors smiled at one another, clearly a little uneasy and then nodded at the girl to go on. She was proud, her smile unwavering. It didn’t even falter on the word dead. This was going to be so good.

“Roses are red. Violets are blue. My dad is dead. If you’re here... yours probably is, too.”

The room was silent. The counselors looked nervous, wary. But the girl, she just smiled, and then glanced at Jack—or was it a wink? For a moment, he couldn’t believe it. But then, as she sat back down, she curtsied in his direction, and that one movement solidified it all. The more he thought about it, the more he was sure that she had, in fact, winked at him. Clearly, this Amelie girl was messing with him.

For those of you who prefer it straight up, no chaser: Mama to five. Writer. Juggler extraordinaire. That just about covers it...

The extended version and in third person no less: Britney King is married to a man she adores (when he isn't driving her crazy) and is the other of FIVE pretty amazing kids, who (surprise!) also have a habit of driving her crazy. Her best guss is that it's genetic. She is the author of two novels, Bedrock and Breaking Bedrock, with plans to release a third and fourth in 2014. In addition, she founded a local network for women in 2012, which has grown to almost 900 members. Currently, she occupies a job she enjoys--serving and running Austin Women's Network. To further prove that she may in fact be certifiably insane, she decided to pursue her dreams and published her debut novel in May of 2013. Then and only then, could she consider her training to be an expert (life) juggler complete.