TRAILER: The Hobbit: The Desolation of Smaug 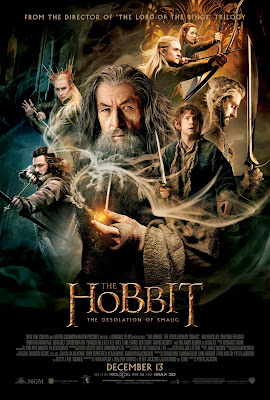 
The second in a trilogy of films adapting the enduringly popular masterpiece The Hobbit, by J.R.R. Tolkien, The Hobbit: The Desolation of Smaug continues the adventure of the title character Bilbo Baggins (Martin Freeman) as he journeys with the wizard Gandalf (Ian McKellan) and thirteen dwarves, led by Thorin Oakenshield (Richard Armitage) on an epic quest to reclaim the lost dwarf kingdom of Erebor.

I thought The Hobbit was beautiful, the cinematography was amazing. But, I felt it was slow...I think I almost fell asleep in the theater! Yikes! However, I did enjoy the movie...the storytelling flowed from scene to scene, and the actors did an outstanding job in bringing these characters to life. I do so enjoy watching Sir Ian McKellan portray the wizard, Gandalf the Gray. It's funny...now that The Hobbit: An Unexpected Adventure is on HBO and can be purchased on DVD/Blu-ray, I find myself watching it again...hahaha! Despite my first thought on it when I watched it in the theater, I am watching and enjoying the movie. Go figure...haha!

But, after watching the trailer for the second installment of The Hobbit movie, The Hobbit: Desolation of Smaug, it looks like moviegoers, as well as myself, will be in for more adventure and action for this group of dwarves, a hobbit and a wizard as they continue on their quest to Erebor. Good thing the first film is showing on HBO, I will be ready to watch this second installment with having my memory refreshed with what happened in the first movie...haha!

Check out this adventurous 3-minute sneak peek trailer that was recently released for The Hobbit: The Desolation of Smaug!


And, here's a recent video 12 from Peter Jackson's Production Diary...


Watch all of Peter Jackson's "Production Diary" videos at:
The Hobbit: The Desolation of Smaug Trailers & Clips

The Hobbit: The Desolation of Smaug character posters were also released!

The Hobbit: The Desolation of Smaug hit theaters December 13, 2013

Oh yeah! I am excited! I am definitely looking forward to watching this!

What say you awesome nerds!
Sound off in the comments below!
Posted by Jasmine Albitos at 7:51 AM