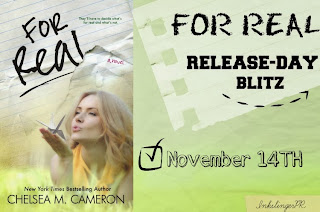 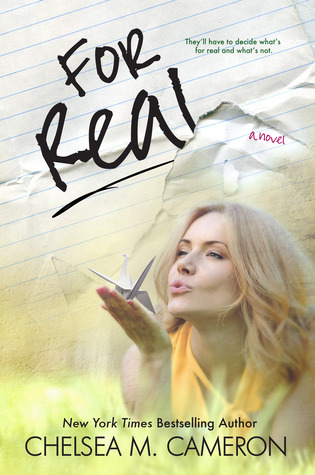 Summary from Goodreads
Two people. One fake relationship. What could go wrong?

When virgin Shannon Travers gets fed up with her friends demanding that she find a boyfriend, she enlists the help of tattooed, mohawk-rocking graphic design student Jett. He's more than happy to play along with their Fake Relationship, including the Ten Rules of Fake Dating that control-freak Shannon comes up with. Even if he likes to violate them. Repeatedly.

But what happens when Fake Dating starts to feel... not fake anymore? Will Shannon be willing to let go and embrace the first thing in her life that's ever felt REAL?

Excerpt
“Wake up, princess,” a male voice I only sort-of recognize says in my ear. My eyes are slow to open and I’m staring right at a chest I don’t remember falling asleep on. I lift my chin and meet a set of gorgeous brown-gold eyes.
“Hey,” he says, his voice soft as I realize I’m lying on top of him. At some point during the movie, he’d shifted under me and brought both our sets of legs up on the couch and laid back, pulling me so we’re front to front. My boobs are completely squished into his chest, which is the first thing that makes me try to shift off him.
“Um, hey,” I say as I struggle to get off him, but there’s no place to put my hands, so I end up trying to roll and he tries to help me, but I end up tipping too far off the couch, banging the back of my head on the coffee table and landing on my side on the floor with a crash.
“Oh my gosh, are you okay?” Is he laughing?
“Ow,” I say. I’m awake now. There’s a sharp pain in my hip, and in my skull. Jett reaches down and hauls me up.
“You’re laughing at me,” I say as I feel the back of my head.
“No I’m not,” he says, while trying to contain his laughter.
“Asshole,” I say, but he’s still holding onto me.
“Where does it hurt?” he says, finally showing some concern.
“The back of my head and my hip banged on the floor. That’s gonna leave a mark.” He walks around me and tenderly moves my hair out of the way to look at my soon-to-be-bumpy head. I go all tingly again, and the pain fades just a little. This guy is better than Tylenol. And then I feel something warm right where the bump is and I swear her just kissed it.
“And your hip?” he says, his voice low.
Is it possible to die from anticipation? Because I think I just did. Jett crouches down and I swear I’m going to have a seizure if he does what I think he’s going to do.
And then he very carefully places the lightest of kisses on my hipbone and OH MY GOD I SWEAR I CAN FEEL HIS LIPS THROUGH MY JEANS AND I’M GOING TO DIE NOW.

For Real is Available Now

On sale for a limited time only! 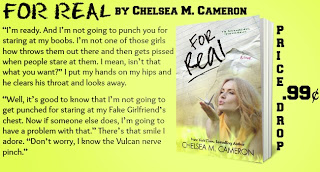