Book 1 of the Sinners series... 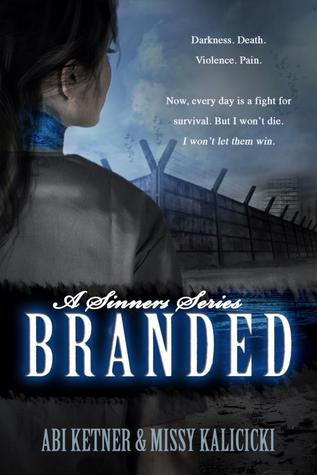 Summary from Goodreads
Fifty years ago the Commander came into power and murdered all who opposed him. In his warped mind, the seven deadly sisns were the downfall of society. He created the Hole where sinners are branded according to their sins and might survive a few years. At best.

Now LUST warps around my neck like blue fingers strangling me. I've been accused of a crime I didn't commit and now the Hole is my new home.

Now every day is a fight for survival. But I won't die. I won't let them win.

The Hole can't keep me. The Hole can't break me.
I am more than my brand. I'm a fighter.
My name is Lexi Hamilton, and this is my story. 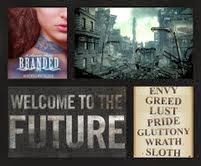 Here's a treat from the authors...

Chapter 1
I’m buried six feet under, and no one hears my screams.
The rope chafes as I loop it around my neck. I pull down, making sure the knot is
secure. It seems sturdy enough. My legs shake. My heart beats heavy in my throat. Sweat
pours down my back.
Death and I glare at each other through my tears.
I take one last look at the crystal chandelier, the foyer outlined with mirrors, and the flawless decorations. No photographs adorn the walls. No happy memories here.
I’m ready to go. On the count of three.
I inhale, preparing myself for the finality of it all. Dropping my hands, a glimmer
catches my eye. It’s my ring, the last precious gift my father gave me. I twist it around to read the inscription. Picturing his face forces me to reconsider my choice. He’d be
heartbroken if he could see me now.
A door slams in the hallway, almost causing me to lose my balance. My thoughts
already muddled, I stand waiting with the rope hanging around my neck. Voices I don’t
recognize creep through the walls.
Curiosity overshadows my current thoughts. It’s late at night, and this is a secure
building in High Society. No one disturbs the peace here—ever. I tug on the noose and
pull it back over my head.
Peering through the eyehole in our doorway, I see a large group of armed guards
banging on my neighbors’ door. A heated conversation ensues, and my neighbors point
toward my family’s home.
It hits me. I’ve been accused and they’re here to arrest me.
My father would want me to run, and in that split second, I decide to listen to his
voice within me. Flinging myself forward in fear, I scramble up the marble staircase and into my brother’s old bedroom. The door is partially covered, but it exists. Pushing his dresser aside, my fingers claw at the opening. Breathing hard, I lodge myself against it. Nothing. I step back and kick it with all my strength. The wood splinters open, and my foot gets caught. I wrench it backward, scraping my calf, but adrenaline pushes me
forward. The voices at the front door shout my name.
On hands and knees, I squeeze through the jagged opening. My brother left through this passage, and now it’s my escape too. Cobwebs entangle my face, hands, and hair. At the end, I feel for the knob, twisting it clockwise. It swings open, creaking from disuse. I sprint into the hallway and smash through the large fire escape doors at the end. A burst of cool air strikes me in the face as I jump down the ladder.

Two.
Three.
Four.
Five of us sit in the holding room. One by one, they pull people into the next room, forcing the rest of us to wonder what torture we’ll endure. An agonizing amount of time passes. I lean my head back and try to imagine a place far away. The door opens.
“Lexi Hamilton.”
A guard escorts me out of the room, and I don’t have time to look back. As soon as the door closes, they pick me up and place me on a table. It’s cold and my skin sticks to it slightly, like wet fingers on an ice cube. Then they exit in procession, and I lie on the table with a doctor standing over me. His hands are busy as he speaks.
“Don’t move. This will only take a few minutes. It’s time for you to be branded.”
A wet cloth that smells like rubbing alcohol is used to clean my skin. Then he places a metal collar around my neck.
Click. Click. Click.
The collar locks into place, and I struggle to breathe. The doctor loosens it some as I focus on the painted black words above me.

The Seven Deadly Sins:
Lust -- Blue
Gluttony -- Orange
Greed -- Yellow
Sloth -- Black
Wrath -- Red
Envy -- Green
Pride -- Purple
“Memorize it. Might keep you alive longer if you know who to stay away from.” He opens my mouth, placing a bit inside. “Bite this.”
Within seconds, the collar heats from hot to scorching. The smell of flesh sizzling
makes my head spin. I bite down so hard a tooth cracks.
“GRRRRRRRRR,” escapes from deep within my chest. Just when I’m about to pass out, the temperature drops, and the doctor loosens the collar.
He removes it and sits me up. Excruciating pain rips through me, and I’m on the
verge of a mental and physical breakdown. Focus. Don’t pass out.
Stainless steel counters and boring white walls press in on me. A guard laughs at me from an observation room above and yells, “Blue. It’s a great color for a pretty young thing like yourself.” His eyes dance with suggestion. The others meander around like it’s business as usual.
I finally find my voice and turn to the doctor.
“Are you going to give me clothes?” A burning pain spreads like fire up from my
neck to my jaw, making me wince.
He points to a set of folded grey scrubs on a chair. I cover myself as much as I can
and scurry sideways. Grabbing my clothes and pulling the shirt over my head, I try to
avoid the raw meat around my throat. I quickly knot the cord of my pants around my
waist and slide my feet into the hospital-issue slippers as the doctor observes. He hands me a bag labeled with my name.
“Nothing is allowed through the door but what we’ve given you,” he says.
I hide my right hand behind me, hoping no one notices. A guard scans my body and opens his hand.
“Give it to me,” he says. “Don’t make me rip off your finger.” He crouches down
and I turn to stone. I don’t know what to do, so I beg.
“My father gave this to me. Please, let me keep it.” I smash my eyes shut and think of the moment my father handed the golden ring to me.
“It was my mother’s ring,” he’d said. “She’s the strongest woman I ever knew.”
With tears in his eyes, he reached for my hand and said, “Lexi, you’re exactly like her. She’d want you to wear this. No matter how this world changes, you can survive.” I
turned the gold band over in my palm and read the engraving.
You can overcome anything… short of death.

“You’re going to take the one thing that matters the most to me?” I say, glaring into the guard’s emotionless eyes. “Isn’t it enough taking my life, dignity, and respect?”
A hard blow falls upon my back. As I fall, my hands shoot out to stop me from
smashing into the wall in front of me. The guard bends down and grabs my chin with his meaty fist.
“Look at me,” he commands. I look up and he smiles with arrogance.
“What the hell?” He staggers a step backward. “What’s wrong with you? What’s
wrong with your eyes?”
“Nothing,” I respond, confused.
“What color are they?”
“Turquoise.” I glower at him.
“Interesting,” he says, regaining his composure. “Now those’ll get you in trouble.”
Reality slaps me across the face. I have my father’s eyes. They can't take them from me. I twist the ring off my finger and drop it in his hand.
“Take the damn ring,” I say. I walk to the door. He swipes a card and the massive
door slides open to the outside.
“You have to wear your hair back at all times, so everyone knows what you are.” He hands me a tie, so I pull my frizzy hair away from my face and secure it into a ponytail. My neck burns and itches as my hand traces the scabs that have already begun to form. Squinting ahead in the darkness, I almost run into a guard standing on the sidewalk.
“Watch where you’re going,” he says, shoving me backward. His stiff figure stands tall and I cringe at the sharpness of his voice.
“Cole, this is your new assignment, Lexi Hamilton. See to it she feels welcome in
her new home.” The guard departs with a salute.
“Let’s move,” Cole says.
I take two steps and collapse, my knees giving out. The unforgiving pavement
reopens the scrapes from earlier and I struggle to stand. A powerful arm snatches me up, and I see his face for the first time.

Abigail Ketner and Missy Kalicicki met in the summer of 1999 at college orientation and have been best friends ever since. After college, they added jobs, husbands and kids to their lives, but they still found time fr their friendship. Instead of hanging out on weekends, they went to dinner once a month and reviewed books. What started out as ane enjoyable hobby has now become an incredible adventure.

Abigail "Abi" Ketner is a registered nurse with a passion for novels, the beaches of St. John, and her Philadelphia Phillies. A talented singer, Abi loves to go running and spend lots of time with her family. She currently resided in Lancaster, Pennsylvania with her husband, triplet daughters and two very spoiled dogs.

Melissa "Missy" Kalicicki received her bachelor's degree from Millersville University in 2003. She married, had two boys and currently lives in Lancaster, Pennsylvania. Aside from reading and writing, her interests include running and mixed martial arts. She also remains an avid Cleveland sports fan.