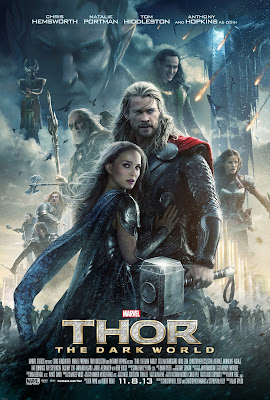 Synopsis:
Thor: The Dark World continues the big screen adventures of Thor, the Mighty Avenger, as he battles to save Earth and all the Nine Realms from a shadowy enemy that predates the universe itself. In the aftermath of Marvel's Thor and Marvel's The Avengers, Thor fights to restore order across the cosmos...but an ancient race led by the vengeful Malekith returns to plunge the universe back into darkness. Faced with an enemy that even Odin and Asgard cannot withstand, Thor must embark on his most perilous and personal journey yet, one that will reunite him with Jane Foster and force him to sacrifice everything to save us all.

Based on:
Marvel's classic Super Hero Thor, who first appeared in the comic book "Journey into Mystery" #83 in August, 1962

I loved it! The cinematography of the Nine Realms were amazing...especially the majestic Asgard! Wow! The way it was portrayed in this movie was breathtaking! They did an amazing job in creating the various Nine Realms, including Earth, and how they intersect in the universe. I just loved the historical aspect of the story. It gave the film more depth as to the plot and storyline. This definitely had its fair share of twists in its storyline and characters. It made the characters feel "real." The cast were amazing at portraying their characters. Just gotta love Anthony Hopkins as Odin! And...whoa! How about Rene Russo as Frigga...the warrior mother. Dayum! She was badass! And, of course, when it comes to Chris Hemsworth...oh yeah, he Is Thor! As for Tom Hiddleston...hmmm! Yes, there is no doubt that he has brought Loki to life in these films...from the first Thor movie to Marvel's The Avengers and, now, in Thor: The Dark World. One just never know where Loki's alliances lie...trusting Loki is definitely risky, but he does still have a heart. Oh Loki! Tom Hiddleston has definitely outdone himself in this movie. Loki is definitely a character to be reckoned with....just don't turn your back on him...hahaha!! Although the role of Fandral was portrayed by Zachary Levi, who replaced Josh Dallas who was in the first film, did a great job of portraying his part. He is such a great actor and all around awesome guy! Just gotta love Zachary Levi! But, oh my goodness, Christopher Eccleston portraying Malekith...WHOA! Talk about evil and darkness. He was amazing at bringing this evil dark elf to life. Can't forget the all too funny cameo of Stan Lee! Yes, he always has cameo moment...this time, it was all too funny! All in all, the cast's chemistry worked..and I loved it!

I really don't want to get into specifics, especially for those who haven't watched the movie yet. But, what can I say...I'm such a fan of comic book heroes that I am just so amazed at how these characters are brought to life on the big screen. Sure...there's heroics and humor with some drama in the movie, but it works! Yes, there was a moment that I had tears in my eyes. But, for sure, keep watching until the very end...and, I mean all the way to the end. Yes, I mean through the credits! Never fails...Marvel always has something of a "cliffhanger" to give us more of what to expect next...in another movie!?!

One thing I would say is....it isn't necessary to watch it in 3D. Save those extra few dollars for popcorn and/or nachos...hahaha!! Watching it in 3D was no different from watching it in 2D...but then again, that's just me.

I would definitely go see it again...haha!

Posted by Jasmine Albitos at 10:10 PM