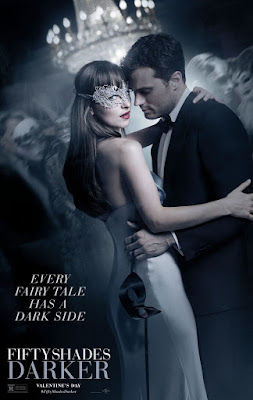 Plot Summary:
Jaime Dornan and Dakota Johnson return as Christian Grey and Anastasia Steele in Fifty Shades Darker, the second chapter based on the worldwide bestselling Fifty Shades phenomenon. When a wounded Christian tries to entice a cautious Anastasia back into his life, she demands a new arrangement before she will give him another chance. As the two begin to build trust and find stability, shadowy figures from Christian's past start to circle the couple. Jack Hyde (Eric Johnson) and Elena Lincoln (Kim Basinger) join the cast, determined to destroy the couple's hopes for a future together. This time there are no rules.
source

I heard that the Fifty Shades trilogy gets better the further you read into it; I suppose that it also true for the movies because of the significant character development. Fifty Shades Darker certainly takes a darker turn. Not only is Christian forcing himself to change to impress Anastasia, she isn’t as quiet and shy as she used to be. But a new conflict outside of their relationship arises as the movie progresses. Christian’s past has gotten in the way plenty of times, but Anastasia’s determined side brings her more trouble than either of them had wanted. One of Christian’s old flames comes back in a very stalker-like fashion and Anastasia gains an unappreciated stalker herself.
The Christian and Anastasia ship has sailed into healthier waters but can use some improvements. In Fifty Shades Darker, Anastasia finished her final year at Washington State University and started her new job at Seattle Independent Publishing. She’s taking large steps in her career, while Christian is actively keeping his sadist urges to a minimum but remains possessive. The acting has not improved but it’s still relatively acceptable. Although, Christian’s stalker is a decent representation of depravity her voice lacked the conviction of someone completely deprived of hope. Alternatively, Anastasia’s new stalker lacked tact and was obvious from the start. His favoritism toward her in the office and constant staring were his definite signs of interest. He brought her coffee, made excuses for people who didn’t show up to a friendly employee outing, and encouraged her to go to a conference with him in New York under the pretense of business. The supporting characters otherwise are hardly memorable, nor do they have much development.
Overall, Fifty Shades Darker is an improvement from Fifty Shades of Grey. The soundtrack was appropriate for steamy, tranquil, or emotional scenes. Some old issues were resolved, Christian and Anastasia gain more development, and the plot thickens nicely for the next movie.

The final chapter in the Fifty Shades trilogy is coming Valentine's Day 2018!

Posted by Mariah Bonifacio at 1:03 PM