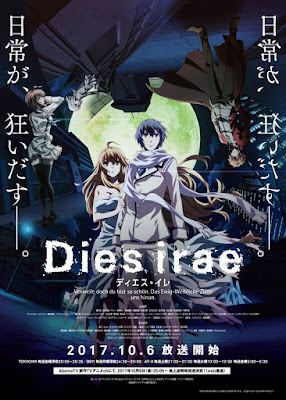 Plot Summary:
On May 1, 1945 in Berlin, as the Red Army raises the Soviet flag over the Reichskanzlei, a group of Nazi officers conduct a ritual. For them, the slaughter in the city is nothing but the perfect ritual sacrifice in order to bring back the Order of the 13 Lances, a group of supermen whose coming would bring the world's destruction. Years later, no one knows if this group of officers succeeded, or whether they lived or died. Few know of their existence, and even those who knew began to pass away as the decades passed.

Now in December in the present day in Suwahara City, Ren Fujii spends his days at the hospital. It has been two months since the incident that brought him to the hospital: a fight with his friend Shirou Yusa where they almost tried to kill each other. He tries to value what he has left to him, but every night he sees the same dream: a guillotine, murderers who hunt people, and the black clothed knights who pursue the murderers. He is desperate to return to his normal, everyday life, but even now he hears Shirou's words: "Everyone who remains in this city eventually loses their minds."
source
Cast:
Kousuke Toriumi, Ken Narita, Yui Sakakibara, Ayaka Fukuhara, Hitomi Nabatame, Takeshi Maeda

Dies Irae was one of the most hyped anime for Fall 2017. It wasn’t that bad but my interpretation of it is the equivalent of someone about to give a speech, clearing their throat repeatedly, and subsequently leaving without saying a word. Dies Irae looked great but every episode left me confused, lost, or conflicted. It had great visual prowess including CGI, lots of explosions, or blood. I thought each episode would bring me closer to understanding the main idea of Dies Irae but as a viewer who has not read the light novel or visual novel, it was choppy with no decisive end in sight. The Order of the 13 Lances seem to have a purpose while interfering with Ren Fujii’s life, but it’s hardly made clear half way through the eleven episodes. It just seems like the Order of 13 Lances wants to cause chaos despite following orders. The synopsis’s “a group of supermen whose coming would bring the world's destruction” isn’t helpful either. The synopsis and plot told me very little because any antagonistic force or even a protagonist can enjoy some thorough destruction.

The anime required more character build up, even a few more flashbacks would have fixed that. The main character, Ren, was simple as a protagonist: a young man who wants to live a normal life, has childhood friends, got into a fight with one of them, and tried to move on, but now has to deal with the past and he isn’t normal. Ren must deal with not only his past but the coming of Order of the 13 Lances. Supporting characters in Dies Irae include his childhood friends Kasumi Ayase, Rea Himuro, Shiro Yusa, and a new girl, Marie. Each of them deliver very little to the story except for Marie, who gives him the power to fight back.

Overall, the story is lacking but the animation is amazing from the opening sequence to the battle scenes in each episode. If the plot was fine-tuned and motives made clear, this first season would have given this anime a higher score.

Posted by Mariah Bonifacio at 1:18 PM