Welcome to the Official Blog Tour for critically acclaimed author Katie McGarry's upcoming YA contemporary romance, Say You'll Remember Me—a story o two people from different worlds pushing themselves, and each other, to get what they deserve!

This is a Review & Excerpt tour! So... On our tour stop today, we have an exciting excerpt! Yes, we have a sneak peek into the book before its release on January 30, 2018! Check out the blog tour festivities and pre-order your copy now!!! 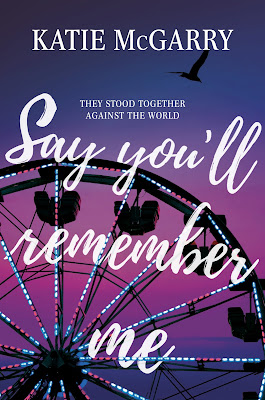 Synopsis:
"Doesn't matter who did it. Not anymore. I did the time. Its over."

When Drix was convicted of a crime--one he didn't commit--he thought his life was over. But opportunity came with the new Second Chance Program, the governor's newest pet project to get delinquents off the streets, rehabilitated and back into society. Drix knows this is his chance to get his life back on track, even if it means being paraded in front of reporters for a while.Elle knows she lives a life of privilege. As the governor's daughter, she can open doors with her name alone. But the expectations and pressure to be someone she isn't may be too much to handle. She wants to follow her own path, whatever that means.When Drix and Elle meet, their connection is immediate, but so are their problems. Drix is not the type of boy Elle's parents have in mind for her, and Elle is not the kind of girl who can understand Drix's messy life.But sometimes love can breach all barriers.Fighting against a society that can't imagine them together, Drix and Elle must push themselves--Drix to confront the truth of the robbery, and Elle to assert her independence--and each other to finally get what they deserve.

*Excerpt*
~Ellison~
Sean points, and a woman in the back asks, “You never met Mr. Pierce before?”
I shake my head, and Sean gestures to the microphone. “No. I was playing a midway game earlier, and he ended up playing beside me, but then we went our separate ways. I left the game, and these guys started to harass me, and hen Hendrix asked if I needed help. I agreed, and he suggested we talk. He said that if the guys thought we were friends they would eventually lose interest, and they did. Hendrix played a game, and we talked until Andrew showed.”
“Andrew?” someone asks.
“Andrew Morton.” That causes enough of a stir that nervousness leaks into my bloodstream and makes my hands cold and clammy. Why is it that I feel that I said something terribly wrong?
“Are you and Andrew Morton friends?” someone else asks, and the question hits me in a sickening way. I name-dropped the grandson of the most powerful US Senator…the position my father is campaigning for. Sean is going to roast me alive.
“Yes. We’ve been friends for as long as I remember.” Friends, enemies, it’s all semantics at this point.
“Did you and Andrew Morton plan to attend the festival together?” Another reporter.
“Yes.”
“Were you on a date?” a woman asks.
My entire body recoils. “What?”
“Are you and Andrew Morton romantically involved?”
I become one of those bunnies who go still at the slightest sound. “I thought we were talking about Hendrix.”
“Did Mr. Pierce confront the men?”
Finally back on track. “No, he was adamant that there should be no violence.”
More questions and I put my hand in the air as I feel like I’m the one on trial. “Isn’t that the point?  Hendrix went through my dad’s program, and one of the first chances he had to make a good decision, he made one. We’re strangers, and he helped me without violence. That, to me, is success.” A few people nod their head, and because I don’t want to be done yet… “Mr. O’Bryan—grown men shouldn’t be following seventeen-year-old girls. I’m curious why you didn’t step in when I was being harassed. If you saw Hendrix and me together, then you know what happened, and it’s horrifying you didn’t help. Hendrix made the right choice. You did not.”
A rumble of conversation, Sean places a hand on my arm and gently, but firmly pushes me to the side. The raging fire in his eyes says he’s mentally measuring out the room in the basement he’s going to let me rot in for the next ten years.
My father approaches the microphone with an ease I envy. “Any more questions for Ellison can be sent to my press secretary. As you can tell, it’s been a trying day for my daughter, but we are most grateful for Mr. Pierce’s actions. We promised a program that was going to help our state’s youth turn their lives around, and, thanks to Mr. Pierce’s admirable actions, we are proud of our first program’s success.”
He offers Drix his hand again, and Drix accepts.
Lots of pictures and applause, and Dad leans in and whispers something to him. I can’t tell what it is, but I do see the shadow that crosses over Drix’s face, his throat move as he swallow and then the slight nod of his head.
I don’t know what happened, but I don’t like it. The urge is to rush Drix, but Sean has a firm hold on my elbow, keeping me in place, silently berating me for causing problems.


Drix stands behind the podium and drops a bomb so huge the ground shakes beneath my feet. “Because Ellison had enough courage to explain what happened today, I’m going to tell you what I was convicted of…” 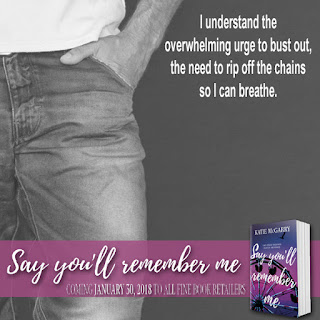 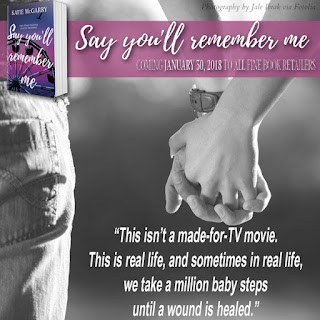 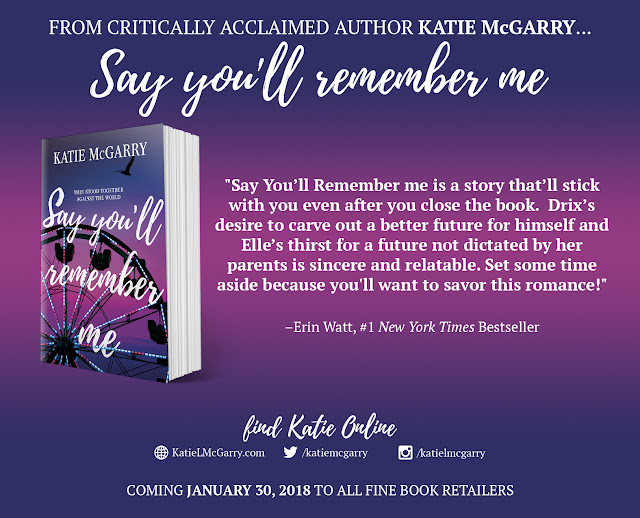 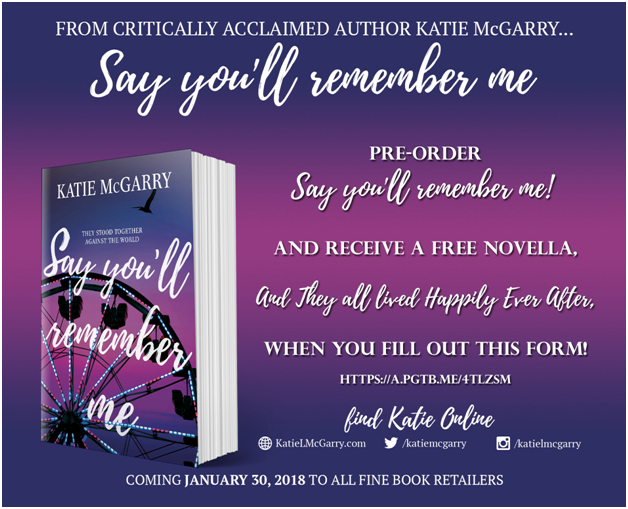 Pre-order Say You'll Remember Me, register and you will receive And They All Lived Happily Ever After, a novella that features your favorite Pushing the Limits and Thunder Road characters!

From the Pushing the Limits series, Noah, Beth, Isaiah, West and Logan are all grown up.
Catch up with your favorite characters as one of them finally says, I do.

Pigpen, Eli and Addison from the Thunder Road series: Three separate personalities who still needed to find love...and still had someone important to meet.

This is a limited time offer! So hurry! Registration ends February 3, 2018! You must register your pre-order to receive And They All Lived Happily Ever After.

Fill out this form: https://a.pgtb.me/4tLZSM 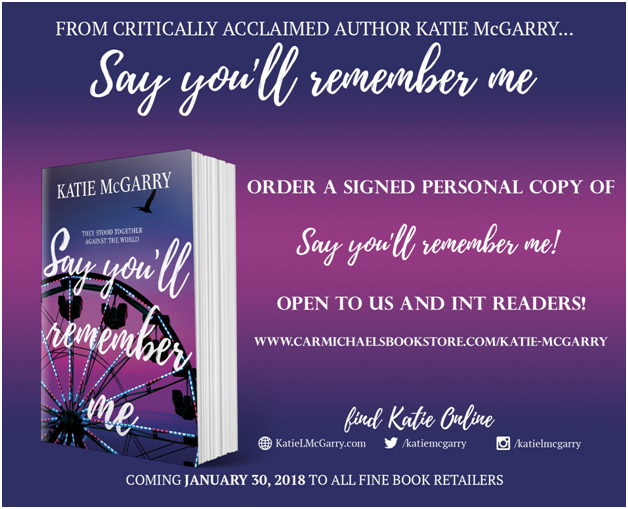 Can't wait to get your hands on a signed copy of Say You'll Remember Me by Katie McGarry! You don't have to!

Pre-order a signed copy of Say You'll Remember Me by visiting Carmichaels' Bookstore at:
www.carmichaelsbookstore.com/katie-mcgarry

International readers:
Email the bookstore directly to order at:
Info@carmichaelsbookstore.com