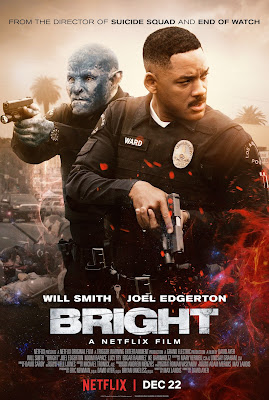 Plot Summary:
In a Los Angeles rife with interspecies tensions, a human cop and his orc partner stumble on a powerful object and beccome embroiled in a prophesied turf war.
source

So... I finally watched Bright! I found it to be entertaining. The movie blended various different genres into this. There's a little bit of drama, fantasy, action, adventure, and suspense. The characters... Well, there's enough character development to bring this story/plot together. There's a good amount of action to keep it interesting. There's a good amount of suspense that kept me at the "edge of my seat." The amount of realism of discrimination and prejudices was believable since to this day, we still have that happening all around us, not just the cities. And, the way they played it out in this movie was gritty and hard, but a lot of care was put into it to not disrespect either.

Two cops from two different "worlds" are put together in society filled with interspecies tensions... Yah, like that isn't happening now. Anyways, I loved how Will Smith and Joel Edgerton had chemistry in making it believable... their love/hate partnership... Ha! I liked the light humor that was worked into their dialogue; nevertheless, it is also obvious on how they handle the tensions all around them. Then, at the end of the day, it's all part of their job, right?!? Of course, they just happen to stumble upon some good/evil prophecy stuff.... Right?!?

Anyways, I loved the casting. They were amazing and convincing in portraying characters in a society that was supercharged with tensions that go beyond corruption, prejudices and discrimination.

Bright seems to have left a lot open, as if there's so much more to the story. There's a lot of subplots that were hinted at, and left open for more possibilities. Bright has a lot potential for more storylines/plots. Hmmm... Well, let's hope the sequel dives further into this "prophecy" and into this partnership between Ward and Jakoby.

Bright is an entertaining movie that fans of crime dramas and fantasy would enjoy. This movie gave off some Lethal Weapon, Rush Hour, and Lord of the Rings kind of vibes. Yah, I would watch it again. And, I look forward to watching the sequel.

Posted by Jasmine Albitos at 3:05 PM