We are thrilled to bring you the Release Day Launch for Stone Cold Touch, the second novel in The Dark Elements Series, by Jennifer L. Armentrout!

Synopsis:
Every touch has its price
Layla Shaw is trying to pick up the pieces of her shattered life—no easy task for a seventeen-year-old who’s pretty sure things can’t get worse. Her impossibly gorgeous best friend, Zayne, is forever off-limits thanks to the mysterious powers of her soul-stealing kiss. The Warden clan that has always protected her is suddenly keeping dangerous secrets. And she can barely think about Roth, the wickedly hot demon prince who understood her in ways no one else could.But sometimes rock bottom is only the beginning. Because suddenly Layla’s powers begin to evolve, and she’s offered a tantalizing taste of what has always been forbidden. Then, when she least expects it, Roth returns, bringing news that could change her world forever. She’s finally getting what she always wanted, but with hell literally breaking loose and the body count adding up, the price may be higher than Layla is willing to pay…

*Excerpt*
I’d remained in bed after that, trying to sort through the odd tingling in my chest. There was a slight smile on my lips, because Zayne…well, he’d made my day, but then I’d remember what Roth had said to me the night before and the smile would wash away as if it had never been there.

I probably needed to get used to the whiplash mood swings.

It wasn’t until after dinner that I decided to scrub a day’s worth of gunk off myself. Gingerly, I peeled the bandage off, happy to find that the cut in my arm was healing as expected. I didn’t need to cover it anymore. The arm was still tender, but the Warden blood in me was quickly undoing the damage from the iron.

After changing into fresh pj’s, like a total hermit, I padded over to my desk, where I’d left my cell phone. It had been on silent all day and when I tapped the screen, I wasn’t surprised to see a slew of texts from Stacey.

A minute later: Your locker misses u. Guess u sick with the herp?

Oh my God. I laughed out loud, grinning as I thumbed through her texts. Our bio sub is still hot. U r missing this.

My boobs miss u. How weird is that?

That was notably weird and yet not surprising.

If I get my cell taken from me, it’s ur fault.

Air punched out of my lungs as I read the next text and the several following them.

U have no idea who just walked into bio!!!

Holy Canola oil, why aren’t u here to witness this?

Ok. He says he had mono. Srlsy? Do people still get mono? And who in the duck was he kissing? A second later—Duck? I didn’t mean duck. That’s SO not what I meant, autocorrect.

Another text had come in about fifteen minutes after the last one. He asked where u were. I told him u joined a cult. I laughed. He didn’t.

Finally, the last text was to call her if I wasn’t dead.

“What in the Hell?” I tossed my cell onto the bed, mouth hanging open. 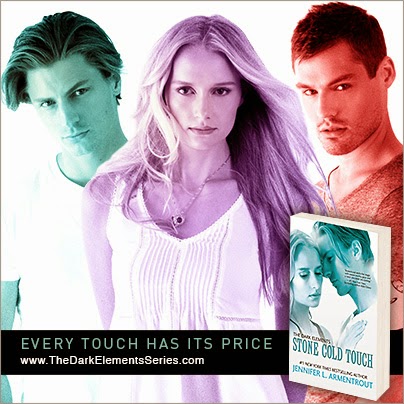 "Constantly entertaining...the narrative sizzles with as much tension as romance."
—Kirkus Reviews on White Hot Kiss

And don't forget! The choice is yours...

Beginning today you’ll have 3 weeks to visit the series website, www.thedarkelementsseries.com, to take a poll and decide which guy Layla should ultimately choose in the final book in the trilogy, Every Last Breath.

At the end of 3 weeks, we will tally all the votes, and that’s when Jennifer L. Armentrout will start writing Every Last Breath. The guy who gets the most votes is the one Layla will pick.

To prevent early spoilers, we're not going to reveal who won the poll in advance…you’ll have to wait until Every Last Breath goes on sale on July 28, 2015 to find out whether Zayne or Roth wins Layla in the end. We promise the book will be epic and definitely worth the wait!

Who do you want Layla to end up with?

Go to www.thedarkelementsseries.com and vote for your choice!

# 1 New York Times and USA Today Bestselling author Jennifer L. Armentrout lives in Martinsburg, West Virginia. All the rumors you’ve heard about her state aren’t true. When she’s not hard at work writing. she spends her time reading, working out, watching really bad zombie movies, pretending to write, and hanging out with her husband and her Jack Russell Loki.
Her dreams of becoming an author started in algebra class, where she spent most of her time writing short stories….which explains her dismal grades in math. Jennifer writes young adult paranormal, science fiction, fantasy, and contemporary romance. She is published with Spencer Hill Press, Entangled Teen and Brazen, Disney/Hyperion and Harlequin Teen. Her book Obsidian has been optioned for a major motion picture and her Covenant Series has been optioned for TV.


She also writes adult and New Adult romance under the name J. Lynn. She is published by Entangled Brazen and HarperCollins.