MY THOUGHTS: Starters by Lissa Price

Survival is just the beginning... 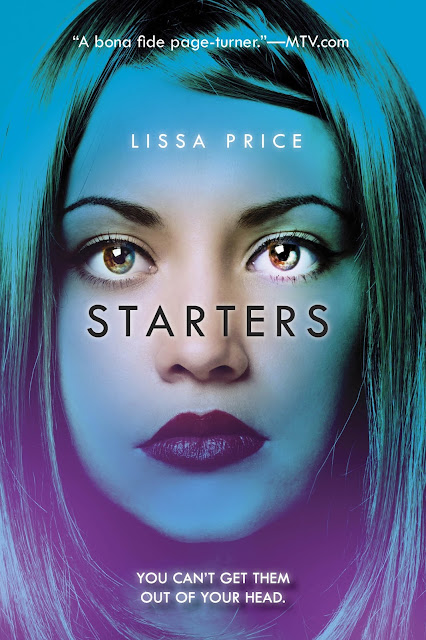 You can't get them out of your head.

Callie lost her parents when the Spore Wars wiped out everyone between the ages of twenty and sixty. She and her little brother, Tyler, go on the run, living as squatters with their friend Michael and fighting off renegades who would kill them for a cookie.

Callie's only hope is Prime Destinations, a disturbing place in Beverly Hills run by a mysterious figure known as the Old Man. He hires teens to rent their bodies to Enders -- seniors who want to be young again. Callie, desperate for the money that will keep her, Tyler, and Michael alive, agrees to be a donor. But the neurochip they place in her head malfunctions and she wakes up in the life of her renter.

Callie soon discovers that her renter intends to do more than party -- and that Prime Destinations' plans are more evil than she could ever have imagined...

Praise for Starters
"Fans of The Hunger Games will love it."
-Kami Garcia, New York Times bestselling coauthor of the Beautiful Creatures novels.

"Readers who have been waiting for a worthy successor to Suzanne Collins's The Hunger Games will find it here. Dystopian sci-fi at its best."
-Los Angeles Times

About the Author
Lissa Price's debut novel Starters is an international bestseller published in over thirty countries. Dean Koontz called this YA futuristic thriller "a smart, swift, inventive, altogether gripping story." The LA Times said it is "Dystopian science fiction at its best." Starters was one of only four debuts on the Barnes & Noble Best Books of the Year for Teens List 2012. It won the Netherland's Crimzone Best YA Thriller Award and was a top ten favorite of 2012 in both Germany and France, beside books by J.K. Rowling and Toni Morrison.

Her name is pronounced LIH-suh.

Lissa Price lives in the foothills of Southern California with her husband and the occasional deer.

My Thoughts
The first time I heard about Starters was at WonderCon 2012 in Anaheim, California when Lissa Price was on a YA panel and premiered the book trailer. After watching the book trailer, I was definitely intrigued. Being in a genre, sci-fi, that I love, I wanted to immerse myself into this dystopian world. After meeting Lissa a few times at various events, my curiosity for this book grew. I decided it was time to read Starters. And, so I did...

Starters is set in the future after the Spore Wars, which decimated every adult between the ages of twenty and sixty, leaving the children and the elderly. Moreover, the elderly's mortality seemed to have bee extended. Interesting enough...to set the story in motion. It seemed very creepy to me that senior citizens were living quite a long time. Being told in a young person's point of view, it lent an interesting view on how the young saw their society. Technology has advanced quite a bit in this new society with things like airscreens and advance navigation systems in cars. I was amazed at the details Lissa has included in creating this world.

I loved her characters, they were definitely characters with substance and emotions. The story is told in Callie's point of view taking readers on the dangerous journey of survival she embarks on to take care of her little brother, Tyler. The characters surprisingly have depth and discernible personalities, especially when they had to share the same body. Lissa's characters maintained their individuality throughout the story; therefore, achieving the readers ability to decipher who was who, especially in a time when the elderly was "renting" young bodies. It somewhat reminds me of Stephenie Meyer's adult novel, The Host, in which two characters occupied one body.

Throughout the story, I was completely immersed in Callie's quest to make a better life for Tyler, Michael and herself...even sacrificing her body. At such a young age, for Callie to have to become mother and father to her little brother can be such a burden. And, without any living adult relatives to claim them or help them, they had to fend for themselves in a world where they take "unclaimed" minors to an "institution." I even started to question who can Callie trust in a world where the elderly "occupied" the bodies of teenagers. With each turn of the page, I was completely immersed in this world that Callie lives in...with all the dangers and obstacles that she, Tyler and Michael had to endure to survive. I loved this character, Callie; she's strong-willed, compassionate, intelligent and has a big heart....at times, she seemed a bit naive, especially when truths were revealed to her via her body "renter." I definitely did not get bored reading. With all the suspense and mystery behind "The Old Man," the story kept me "at the edge of my seat" with all that thrilling suspense in trying to stop his plan from coming to fruition. Now, that is another story in itself...who is "The Old Man" of Prime Destinations.

I would have to say, this is an interesting YA dystopian sci-fi novel, that was hard to put down. Lissa Price definitely achieved the elements of suspense, thriller, mystery and drama in Starters. 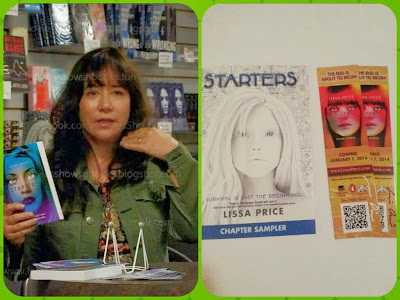 a Rafflecopter giveaway
Posted by Jasmine Albitos at 11:57 PM