From New York Times best-selling author Melissa dela Cruz and Michael Johnston comes this remarkable first book in a spellbinding new series about a dawn of a new kind of magic.

Blurb
WELCOME TO NEW VEGAS, a city once covered in bling, now blanketed in ice. Like much of the destroyed planet, the place knows only one temperature -- freezing. But some things never change. The diamond in the ice desert is still a 24-hour hedonistic playground, and nothing keeps the crowds away from the casino floors, never mind the rumors about sinister sorcery lurking in the shadows.

At the heart of this city is Natasha Kestal, a young blackjack dealer looking for a way out. Like many, she's hear of a mythical land called "the Blue." They say it's a paradise, where the sun still shines and the waters ae turquoise. More importantly, it's a place where Nat won't be persecuted, even if her darkest secret comes to light.

But passage to the Blue is treacherous, if not impossible. Nat's only shot is to bet on a ragtag crew of mercenaries led by a cocky runner named Ryan Wesson. Danger and deceit await on evry corner, even as Nat and Wes find themselves inexorably drawn to each other. But can true love survive the lies? Fiery hearts collide in this tale of the evil some men do and the awesome power within us all. 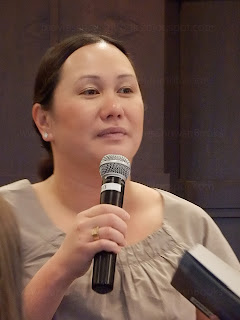 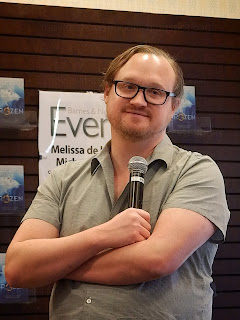 Melissa grew up in Manila and moved to San Francisco with her family, where she graduated high school salutatorian from The Convent of the Sacred Heart. She majored in art history and English at Columbia University.

MICHAEL JOHNSTON is Melissa's husband and hertofore "silent partner." He is co-creator of the Blue Bloods and Witches of East End series.

Melissa and Michael live with their daughter in Los Angeles and Palm Springs, California.

My Thoughts
I really enjoyed this book! It's definitely a different take on a post-apocalyptic world. I found it to be a mash up of sci-fi, dystopian and fantasy all rolled into this story. It was a great read since Melissa and Michael took several of my favorite genres in books and television, and created this unique world in this book. The story really reminded me a lot of my favorite TV shows and movies such as: Battlestar Galactica, Starship Troopers, the Lord of the Rings movies and the Chronicles of Narnia movies, just to name a few. And, some of these are Melissa and Michael's favorites...hahaha!!

Let's begin with the world building, Melissa and Michael created an amazing post apocalyptic world that has frozen over, filled with ice and trash. The story is told in third person point of view, which worked in telling the story of the two main characters. They successfully created the harsh climate and treacherous landscapes, as well as seascapes, which I was able to imagine. The journey itself was also no easy task as I came to find out after each chapter. It's crazy to think that the world, as we know it now, can possibly become this dystopian world that Melissa and Michael has created in this book. I just loved how they took reality and created a possibility of what may be in this book.

I enjoyed the character development in the story. Melissa and Michael created strong identities for the characters. Nat, the female lead, begins as a little girl lost and not knowing who she really is. As for the male main character, Wes, a soldier with a dark and troubling past but with a big heart. The way Nat and Wes' lives are intertwined sets for an adventurous and dangerous journey...with each turn of the page. I would also agree that all the other characters, human and magical, has strong personalities that there's no mistaking who and what they are in the story and to each other. We can't forget that these characters are only teenagers!!! It's easy to forget that while reading, especially with all the danger that they encounter on this journey they embark on.

Frozen was definitely an intriguing and interesting read.  At times, it seemed chaotic since this journey these characters take had various obvious and hidden dangerous that crossed their paths along the way. This book was definitely, as they called it, a mash up of genres...sci-fi and fantasy in a post-apocalyptic world. How crazy and unique is that! It was definitely fun to read. Frozen is filled with adventure, danger, mystery and young romance. It's definitely a great beginning to a new series!

So for those who haven't read it yet, check out the book trailer! 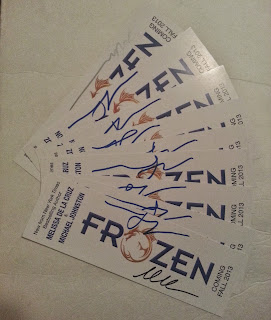 a Rafflecopter giveaway
Posted by Jasmine Albitos at 5:40 AM