Consumed (Book 2 of the Devoured Series) by Emily Snow 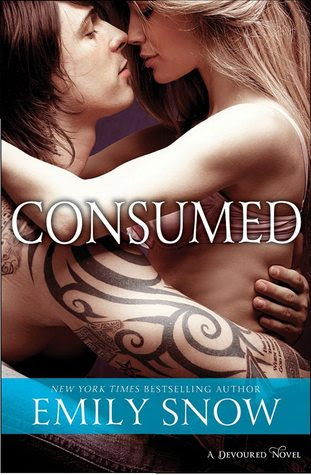 About the Book
Now that Lucas has declared his love for her, Sienna is sure the drama between them is over. She's not afraid of Lucas's ex-wife or whatever secret the other woman is holding over him. For two blissful days -- the remainder of Sienna's contract with Lucas -- they hole up in a vacation house in the mountains of Tennessee, consuming each other. At the end of their stay, Lucas comes to Sienna with a proposition: his band, Your Toxic Sequel, is going on tour with Wicked Lambs, and he wants her with him the entire time. Sienna agrees to work wardrobe and be his official girl.

Then the threats start.

Lucas's ex-wife Sam isn't happy that he's moved on, and Sam begins harassing Sienna -- everything from threatening emails to phone calls and even fake accounts on Your Toxic Sequel message boards slamming her and spreading vicious rumors. Sienna keeps this from Lucas since she knows how bad Sam is for his music.

It's not until Sienna is attacked by a crazed YTS fan hired by Sam, and Sam starts to aim her verbal threats at Sienna's grandmother, that Lucas finally reveals his secret. And it's a big one...

Emily Snow is the New York Times and USA Today best-selling author of the Devoured series and Tidal. She loves books, sexy bad boys, and really loud rock music, so naturally, she writes stories about all three.