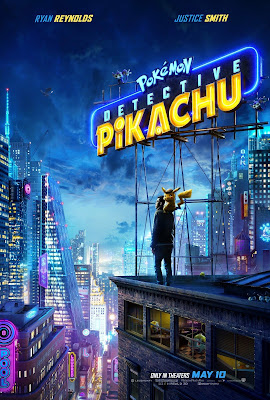 Based on:
"Detective Pikachu" video game
(developed by Creatures, Inc.)

Plot Summary:
The story begins when ace private eye Harry Goodman goes mysteriously missing, prompting his 21-year-old son Tim to find out what happened. Aiding in the investigation is Harry's former Pokémon partner, Detecitve Pikachu; a hilariously wise-cracking, adorable super-sleuth who is a puzzlement even to himself. Finding that they are uniquely equipped to communicate with one aother, Time and Pikachu join forces on a thrilling adventure to unravel the tangled mystery. Chasing clues together through the neon-lit streets of Ryme City⏤a sprawling, modern metropolis where humand and Pokémon live side by side in a hyper-realistic live-action world⏤they encounter a diverse cast of Pokémon characters and uncover a shocking plot that could destroy this peaceful co-existence and threaten the whole Pokémon universe.
source

Note: This review contains SPOILERS
Pokémon Detective Pikachu is a movie Pokémon fans throughout the generations will enjoy. It is a delightful intertwining of the main story and the games showcased on the big screen. The movie cleverly takes elements from the entire Pokémon franchise and brings it to life, particularly from the 2016 game Detective Pikachu for the Nintendo 3DS. Tim Goodman and Pikachu work together to discover the whereabouts of Tim’s father, Harry, after a fatal car crash leads to Harry’s disappearance. The battle sequences are brought to life, references to the Pokémon universe are many including famous trainer Red, Mewtwo’s origins in the Kanto region, the common opinion that Magikarp would be better off as a Gyarados, and many more. This unfortunately means that those watching the movie without any Pokémon background may feel lost or that the story is weak and uninteresting. With a PG rating, the movie itself caters to a younger audience. The Pokémon’s realistic but endearing designs and the message throughout the movie of cooperation between a Pokémon and humans makes it a family friendly movie. While Pokémon are brought to life with CGI, the production team stuck true to the original designs to make the Pokémon beautifully awe-inspiring but not so much that they look like creatures of mass destruction that threaten humanity. . . even though Pokémon kind of can destroy humanity if they wanted to. My personal favorite designs are the herd of Bulbasaur that Tim approaches to save Pikachu’s life. Their expressive eyes, pacifistic actions, and smiling Poké-faces made them less like pocket monsters and more like faithful companions. Veteran Pokémon fans will enjoy being immersed in this fictional world of Pokémon Detective Pikachu, because their imagination becomes reality.
Pokémon Detective Pikachu has comedy, its adorable mascot, subtle sexual innuendos, father and son moments such as Pikachu talking to Tim about dating Lucy Stevens, but it doesn’t stray away from the dark undertones that come with living in a Pokémon world. Let’s not forget, that there’s always a rich and powerful businessman, in this case Howard Clifford, wanting to use Pokémon for his selfish personal gain. Because no Pokémon game would be complete without those kinds of baddies, am I right? And then, there is Mewtwo himself who is considered a Pokémon god, Ditto turning into Machamp and threatening to kill Tim, and Psyduck with his constant headache subsequently leading him to be a ticking time bomb. The story of Pokémon Detective Pikachu also plays very well with foreshadowing and creating moods, but it is a linear plot that makes the climax and resolution predictable to the audience that pays close attention. If I had to give you examples, I would say that just the mention of Harry disappearing while investigating a Mewtwo case automatically made me believe that Mewtwo transferred Harry’s whole being into Pikachu’s body. If that isn’t enough, in the scene where Tim and Pikachu are interrogating a Mr. Mime, Pikachu perfectly describes the strained relationship between Tim and Harry despite having amnesia.
Mewtwo’s personality stayed close to his original cynical and cryptic one from the very first Pokémon movie but before I saw the movie, I was doubtful at thought of Ryan Reynolds as the voice of Pikachu. It was an odd choice to me because he is the face and personality of Deadpool, a gun slinging, katana swinging, and brutally honest superhero but his contribution to Pikachu made the movie even more enjoyable. Overall, Pokémon Detective Pikachu is a must-see and fun movie.

Posted by Mariah Bonifacio at 3:44 PM