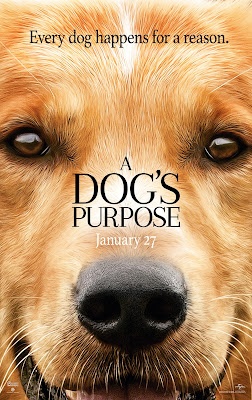 Based on the novel by:
W. Bruce Cameron

Plot Summary:
Based on the beloved bestselling novel by W. Bruce Cameron, A Dog’s Purpose, from director Lasse Hallström (The Cider House Rules, Dear John, The 100-Foot Journey), shares the soulful and surprising story of one devoted dog (voiced by Josh Gad) who finds the meaning of his own existence through the lives of the humans he teaches to laugh and love.  The family film told from the dog’s perspective also stars Dennis Quaid, Britt Robertson, K.J. Apa, John Ortiz, Juilet Rylance, Luke Kirby, Peggy Lipton and Pooch Hall.
source

A Dog’s Purpose is a movie where everything makes a full circle and has a satisfying end. It’s sweet, it’s tear-jerking, and it’s funny. A Dog’s Purpose takes its audience on the journey of five lifetimes through the eyes of Bailey, a dog of many breeds. Bailey has different experiences because of his repeated reincarnation where he experiences love, loneliness, death, and adventure. In each life, he learns something new and learns about his reason to live.

His first life, the shortest, is where he discovers one of his purposes, to have fun. The most important life however is his second life where he is born as a Red Retriever and meets his boy, Ethan. In this life, he feels a sense of being complete. As long as he had Ethan, Bailey felt like there was always a place in the world for him. In Bailey’s next lives though, he is not so lucky. As a German Shepard, Bailey works for the Chicago Police Department where he learns about work-ethic, how to save others, and shot while on duty. As a corgi, Bailey learns about loneliness when living with Maya, who also seems quite isolated from others until Bailey helps her into a relationship. In his fifth and final life, Bailey learns about neglect, although he didn’t exactly have a word for it. In this life, he starts as a St. Bernard, Australian Shepherd mix who is largely chained-up in a rundown urban yard until he was abandoned. This life shows Bailey’s unending loyalty when he makes the journey home to reunite with Ethan.

The voice and personality of Bailey, voiced by Josh Gad, is curious, loving, and light-hearted. He shows no regret for anything he does and it’s both endearing to Ethan and Bailey’s many owners but infuriating to those minor characters that can’t seem to get a handle on their lives, like Ethan’s alcoholic father. Because of Bailey’s narration throughout A Dog’s Purpose the viewer feels a deep connection to each life he lives through. A Dog’s Purpose truly shows how carefree dogs are and the love that they give is unconditional. It may be a dog’s life, but the viewer will feel the warmth and Bailey’s life lessons in their heart.

Posted by Mariah Bonifacio at 12:02 PM