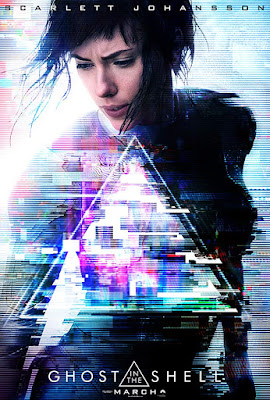 Based on the manga:
Ghost in the Shell by Shirow Masamune

Plot Summary:
In the near future, Major (Scarlett Johansson) is the first of her kind: A human saved from a terrible crash, who is cyber-enhanced to be a perfect soldier devoted to stopping the world’s most dangerous criminals. When terrorism reaches a new level that includes the ability to hack into people’s minds and control them, Major is uniquely qualified to stop it. As she prepares to face a new enemy, Major discovers that she has been lied to: her life was not saved, it was stolen. She will stop at nothing to recover her past, find out who did this to her and stop them before they do it to others. Based on the internationally acclaimed Japanese Manga, The Ghost in the Shell.
source

Note: This review contains SPOILERS
As a person who has only seen the Ghost in the Shell (1995) movie and fragments of Ghost in the Shell: Stand Alone Complex, I must say Ghost in the Shell (2017) is an adequate live action adaptation to its anime counterpart. It is entertaining with all its cut scenes, action shots, battles, and different kinds of robotics. The story starts with Major Mira Killian, played by Scarlett Johansson, as an anti-terrorism operative who questions her existence but most importantly her fragmented past. She is a human brain or “ghost” placed inside of an artificial body also called a “shell” created by Hanka Robotics. The story follows her and the rest of anti-terrorist bureau Section 9 members, Batou, Togusa, and Chief Daisuke Aramaki as they search for a hacker named Kuze. But the closer the Major gets to Kuze, the more inclined she is to discover her identity and subsequently stop the man, Cutter, that tried to erase her past from doing so to others. As a standalone movie, Ghost in the Shell (2017) has a linear plot with only a little deviation to allow Killian to discover her real name and identity, Motoko Kusanagi, but it at least sets up the world of Ghost in the Shell (2017). In comparison to the 1995 anime movie, I think Ghost in the Shell (2017) gives the viewer the same mood and atmosphere. The setting is a high-tech city where robotics and humans share one major detail, they’re both cybernetically enhanced. Both movies set up the main protagonist on a thought-provoking journey to question immortality, individuality, and the organic mind versus the digitally created mind. The biggest peeve about Ghost in the Shell (2017) that has been floating around the internet since its first release is the lead actress. While I didn’t think Johansson was the best choice for Major Kusangai, she fulfilled the role with relatively good accuracy. Based upon Ghost in the Shell (1995) and Ghost in the Shell: Stand Alone Complex, my impression of the Major is someone that is serious, stern, loyal, but mysterious. Johansson’s portrayal seemed a bit empty with a vacant expression and wispy voice in comparison. Kusanagi’s relationship with the rest of Section 9 was minimal at best with her only friend seemingly being Batou, while the rest of the team is forgettable. Overall, I can’t say this is an amazing movie, but it stuck close enough to the 1995 movie that I can’t complain about it.

Posted by Mariah Bonifacio at 3:43 PM