MARIAH's THOUGHTS on The Darkest Minds (2018) 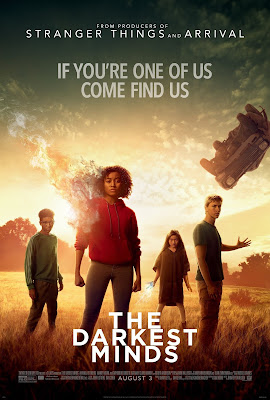 Based on the novel by:
Alexandra Bracken

Plot Summary:
From producers of Stranger Things comes an empowering tale of teens who mysteriously develop new abilities and are declared a threat by the government. Ruby, one of the most powerful young people anyone has encountered, escapes and joins a group of runaway teens seeking safe haven. Soon, this newfound family realizes that collective power is needed to take back control of their fate and save future generations.
source

The Darkest Minds seems like an one hour and forty-three-minute metaphor for the longstanding battle of every century, the old generation versus the new generation. The premise of the movie is the government declares that kids and teenagers that have developed special powers, such as high intelligence to pyrokinesis and mentokenisis, are a threat. From the very first twenty minutes of the movie, the children are collected, categorized in camps, and either forced to work or are killed on the spot. The movie follows one special teenager, Ruby Daly, who places in the rarest category, orange, for her ability to control others. She escapes from the camp that has held her for six years with some help and is introduced to a world different from her old one. It is highly segregated between the camps that are government controlled, the League who collects children to help free them from the camps, and all the runaway kids and teenagers trying to find a new home with each other.

The Darkest Minds has a rather linear story and little character development, making it open to sequels or spin off series. The most character development the viewer will get is Ruby and her backstory. From the very beginning Ruby proves that she is brave, loving, but still insecure. She escapes her camp to reunite with her parents but later remembers that she erased her from their memories with her powers. She is then afraid of becoming close to people because of this memory erasure ability. Many of the other characters such as Zu, Liam, Lady Jane, Cate, and The Captain fill one dimensional roles and lack depth as they are given little to no history. The story to The Darkest Minds has little background, as children and teenagers developed these special powers with no explanation, no origin. The best the movie has to offer the viewer as an explanation to these special powers and how the government dealt with them is that Clancy Gray, another orange, was used as a lab rat by his father when the powers started to develop. The camps seem to simply exist to dehumanize the children and force them to become child solders. But, “why?” Therefore, like I said, it (The Darkest Minds) is open to sequels or spin off series.

The Darkest Minds has everything it needs to be an entertaining young adult fiction, action, romance between Liam and Ruby, self-discovery, some comedy, heart-felt moments, and most of all hope for the future. I enjoy the movie for what is offers and what it could represent, but of course, there is always room for story telling improvement.

Posted by Mariah Bonifacio at 10:12 PM