We are thrilled to share a teaser for bestselling author Roxanne St. Claire's upcoming contemporary romance Barefoot In Pearls, the third novel in The Barefoot Bay Brides series! 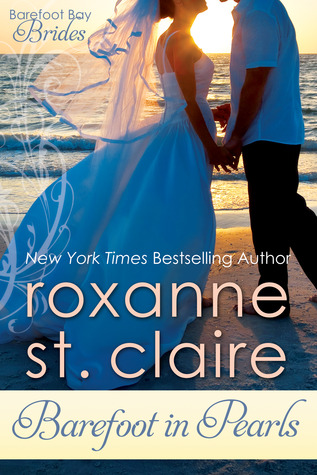 Synopsis:
As her two best friends settle into their happily ever afters, destination wedding designer Arielle Chandler is beginning to wonder if the promise of “The One” – one true love, meant only for her – is merely folklore passed down from her Native American grandmother. But when a mysterious man nearly mows her down on a hill overlooking Barefoot Bay, the legend of destined love suddenly feels very real. That is, until Ari learns of Luke McBain’s plans to demolish a piece of land she believes is sacred.
Luke isn’t proud of the fact that he spent ten years as a mercenary warrior, fighting battles for another country. With those dark days behind him, he’s focused on creating a new life instead of destroying others, so he’s moved to Barefoot Bay to launch a contracting business and build a house for an old friend. But when an enigmatic dark-eyed beauty steals his attention and stops his progress with her announcement that he is about to flatten a native burial ground, Luke has a new battle to fight.
While their immediate and potent attraction grows complicated, Luke and Ari discover the hills of Barefoot Bay could be hiding something far different – and even more valuable – than ancient art or graves. They are determined to discover the truth, but that will come at a cost. Will they risk their chance at once-in-a-lifetime love to uncover secrets that could change the landscape of Barefoot Bay forever?

*Excerpt*
He wasn’t handsome, not in any conventional way. Just rough and dark with heavy whiskers over a jaw that looked like it might have met a few fists in its day. His nose was a little off center and maybe broken once or twice. His chest and shoulders dwarfed her, with no tattoos, no chest hair, just tanned, sweaty skin covering rolling, ripped muscles.

“Really sorry,” he said again. But he didn’t sound sorry, or look it, either. He scanned her face and made no effort to unlock his grip on her wrist.

But right that minute, bathed in sunlight and pinned by a green-gold gaze the color of oxidized copper, Ari Chandler couldn’t do any of those things. Because her whole body was kind of tingling and buzzing and sparking, like she’d just stuck her entire arm in an electrical socket.

“You sure you’re okay?” he asked. “’Cause you look like I rung your bell.”

He rang something. There was no other explanation for how lightheaded she suddenly felt.

His brows pulled into a frown as he gently turned her arm and placed a thumb over her pulse, which hit warp speed.

“Whoa. Your heart’s racing more than mine.” He started to lower her back to the ground. “Sit down. I have some water in my truck. Let me get it.”

“No, no, I’m fine.” But Ari let him guide her down, sitting as he crouched in front of her. “Who runs with their eyes closed?”

“I was trained that way.”

“For what? Suicide missions?”

“Something like that.” His voice, low and charged with mystery, sent another cascade of chills down her spine, a shocking feeling that had no place dancing over her in this heat and humidity.

“Really, what are you doing here?” she asked. “Not very many people on Mimosa Key even know how about this place.” Only dirt roads led to this acreage, which was marked at the perimeter as “Private Property.”
He glanced around. “I’m checking it out.”

“With your eyes closed?”

He almost smiled, just enough to show a hint of dimples and straight white teeth. Just enough to take the edge off his face and turn it into something arresting. She needed to look away, but all she could do was blink at the white lights flashing behind her eyes.

“No…what?” he asked, leaning in to get closer to her. “I can’t check the place out? I have the owner’s permission. Do you?”

But it was possible. He could be...  No, that was her imagination, not the universe answering her plea. Right? “No,” she managed to say.

For one long, suspended second, the world around her crystallized, making her hyperaware of every color, scent, and sound. Everything was magnified. Like the slow roll of a bead of sweat trickling over a scar on his temple. And the flecks of color that somehow mixed to make his eyes a haunting blend of emerald and topaz. Even the timbre of his voice, baritone and sweet, and the rhythmic sound of his breaths as the run caught up with him. He smelled like sunshine and the sea, and his hand, still wrapped around her wrist, was like a hot brand of man against her skin.

She tried to nod at him, letting the very real possibility of what was happening sink in.

“Hey.” He snapped his fingers in front of her face, making her jump. “Do you know your name?” he asked sharply.

She paused, but not because she couldn’t remember it. But because his smile went from almost to full force, and the impact actually hurt.

She could practically hear Grandma Good Bear on her deathbed describing exactly these feelings.

“No way!” She shook her head, still not believing it.

“Hey, it was worth a try.” Still smiling, he leaned back on his haunches.  “Since you’re coherent enough to turn me down, I guess you’re okay, Arielle Chandler. In fact, you’re…” He let his gaze drop over her.  “You’re fine.”

And every cell in her body just went numb. 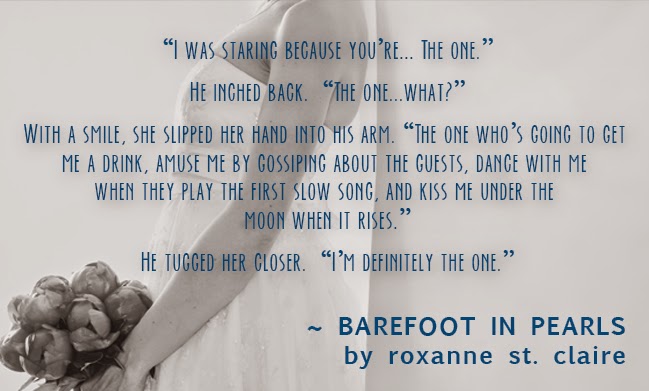 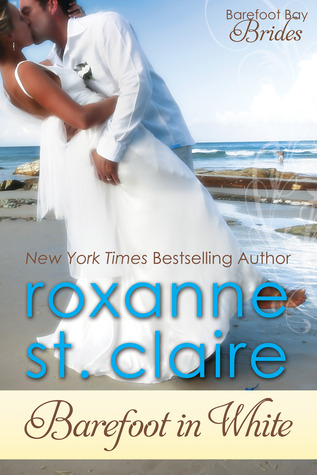 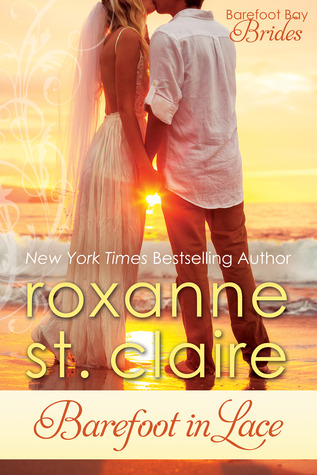 Roxanne St. Claire is a New York Times and USA Today Bestselling author of more than thirty novels of romance and suspense. She is the author of the Barefoot Bay contemporary series as well as two very popular suspense series, the Bullet Catchers and the Guardian Angelinos.
A six-time nominee and one-time winner of the prestigious RITA Award for the best in romantic fiction, Roxanne's books have also been awarded the National Readers Choice Award for best romantic suspense three times, as well as the Daphne du Maurier award, the Booksellers Best Award, the Award of Excellence, the Maggie, the Holt Medallion and many more. Roxanne's books have been published in dozens of countries and are routinely featured as selections in the Doubleday and Rhapsody book clubs.

Posted by Jasmine Albitos at 3:36 PM