JASMINE's THOUGHTS on The Hobbit: The Battle of the Five Armies (2014) 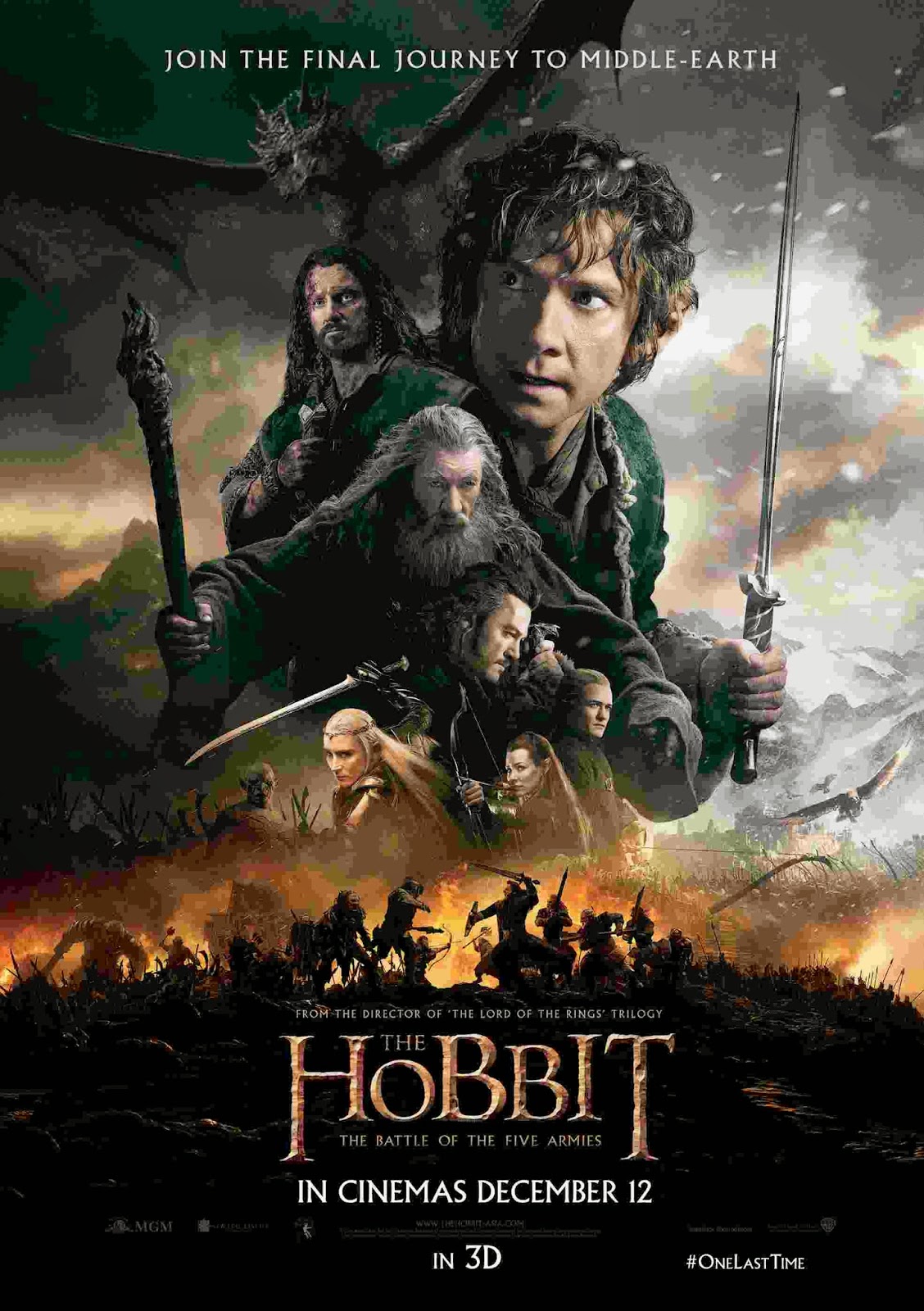 Based on the novel by:
J.R.R. Tolkien

Plot Summary:
The Hobbit: The Battle of the Five Armies brings to an epic conclusion the adventures of Bilbo Baggins (Martin Freeman), Thorin Oakenshield (Richard Armitage) and the Company of Dwarves. The Dwarves of Erebor have reclaimed the vast wealth of their homeland, but now must face the consequences of having unleashed the terrifying Dragon, Smaug, upon the defenseless men, women, and children of Lake-town.

As he succumbs to dragon-sickness, the King Under the Mountain, Thorin Oakenshield, sacrifices friendship and honor in his search for the legendary Arkenstone. Unable to help Thorin see reason, Bilbo is driven to make a desperate and dangerous choice, not knowing that even greater perils lie ahead. An ancient enemy has returned to Middle-earth. Sauron, the Dark Lord, has sent forth legions of Orcs in a stealth attack upon the lonely mountain.

As darkness converges on their escalating conflict, the races of Dwarves, Elves and Men must decide -- unite or be destroyed. Bilbo finds himself fighting for his life and the lives of his friends as five great armies go to war.

The Hobbit trilogy tells a continuous story set in Middle-earth 60 years before The Lord of the Rings.

Find the full list of the cast & crew on IMDB

Note: this review contains NO spoilers

As a Christmas treat, my Dad treated us to the movies! And...we all wanted to watch The Hobbit: The Battle of the Five Armies! So we did...and we all were reeling with the "amazingness" (yeah, I know, it's not a real world) of it!

Wow! What an epic conclusion!!! It absolutely took my breath away! It brought me to tears. It even made me cheer them on! The cinematography was absolutely beautiful! The cast was amazing! I loved how there were hints linking it to the next trilogyt, The Lord of the Rings. I also loved how it ended...tying it to the beginning of the next adventure...the next trilogy. Of course, there was no doubt that we must know what happened with the Dragon, Smaug, since the end of the second film. And...that is how the film started...started where it ended. The connection between the films flowed seamlessly. I also loved the humor that thrown in...haha!!

The Hobbit: The Battle of the Five Armies was beautiful, gripping, and emotional from start to finish. After watching this epic conclusion, I definitely want to watch The Lord of the Rings trilogy...again!

Posted by Jasmine Albitos at 4:37 PM

Email ThisBlogThis!Share to TwitterShare to FacebookShare to Pinterest
Labels: adventure, fantasy, J.R.R. Tollkien, Jasmine's Thoughts on, review, The Battle of the Five Armies, The Hobbit