NERD BLAST: So Say We All: The Complete, Uncensored, Unauthorized Oral History of Battlestar Galactica by Mark A. Altman & Edward Gross

Today, we have a 5-day Nerd Blast + Giveaway for So Say We All: The Complete, Uncensored, Unauthorized Oral History of Battlestar Galactica by Mark A. Altman & Edward Gross! We even have a sneak peek with an exclusive excerpt! So... Check it out and grab your copy now!!! 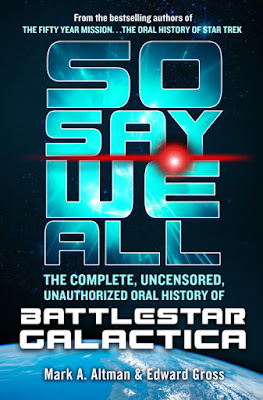 Four decades after its groundbreaking debut, Battlestar Galactica -- both the 1978 original and its 2004 reimagining ? have captured the hearts of two generations of fans. What began as a three-hour made for TV movie inspired by the blockbuster success of Star Wars followed by a single season of legendary episodes, was transformed into one of the most critically acclaimed and beloved series in television history. And gathered exclusively in this volume are the incredible untold stories of both shows - as well as the much-maligned Galactica 1980.

For the first time ever, you will learn the uncensored, unbelievable true story of forty years of Battlestar Galactica as told by the teams that created a television legend in the words of over hundred cast, creators, crew, critics and executives who were there and brought it all to life. So Say We All!

Praise for MARK A. ALTMAN AND EDWARD GROSS

"Slayers & Vampires is a new primary text to pour over, with plenty of behind-the-scenes tidbits about who hated whom and how TV shows are made." —The New York Times

“The authors have done an exhaustive, masterful job of collecting interviews and editing memories, opinions and reflections of hundreds of creative artists, business executives, critics and even the occasional social scientist. What emerges is an intriguing look inside the sausage-making process that is television and film production.” ―The Wall Street Journal

"At last, the final word on the final frontier!” —Scott Mantz, Access Hollywood

"Breathtaking in scope and depth, this is a must-read for Star Trek lovers as well as anyone who wants a better understanding of how television and film production works" —Booklist

"An unprecedented behind-the-scenes look into the making of a TV series. Some days you have liftoff, and other days you blow up on the pad. Trust me, this is what it's like. A must for genre fans and aspiring filmmakers alike." —Jesse Alexander (Executive Producer: Lost, Heroes)

"An absolute must for any Star Trek fan" —Kirkus Reviews

**About the Authors**
MARK A. ALTMAN has been hailed as "the world's foremost Trekspert" by the LOS ANGELES TIMES. Altman is a former journalist for such publications as THE BOSTON GLOBE, CINEFANTASTIQUE and GEEK. He is also the writer/producer of the beloved romantic comedy, FREE ENTERPRISE, starring William Shatner and Eric McCormack as well as the hit TV series AGENT X, CASTLE, NECESSARY ROUGHNESS and FEMME FATALES.
Stay connected with Mark A. Altman

~~~
EDWARD GROSS has an extensive history of covering film and television as a member of the editorial staff of a wide variety of magazines, including CINESCAPE, STARLOG, CINEFANTASTIQUE, SFX, FEMME FATALES, MOVIE MAGIC, LIFE STORY and SCI-FI NOW. He has written numerous non-fiction books and, along with THE FIFTY-YEAR MISSION coauthor Mark Altman, has written more about Star Trek over the past 35 years than just about anyone else. 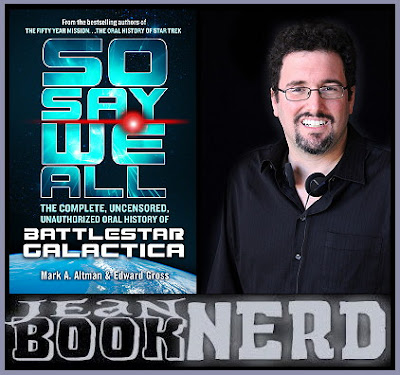