MARIAH's THOUGHTS on To All the Boys I've Loved Before (2018) 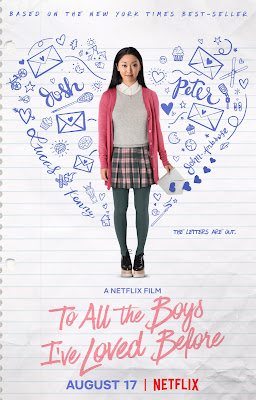 Based on the YA Novel by:
Jenny Han

Plot Synopsis:
When her secret love letters somehow get mailed to each of her five crushes, Lara Jean finds her quiet high school existence turned upside down.
source

Young adults can be wild roller coasters sometimes. I can see that, especially in novels and on television. It doesn’t make it easier when they must face the ups and downs of high school going into college, romance, grades, sense of self, family, or maybe their friends’ lives. To All the Boys I've Loved Before is one such movie that delves into the life of a teenage girl, Lara Jean Song Covey, and takes a ride on that emotional roller coaster of first boyfriends. On a surface level, the movie hits all the right points for a teenage drama and romance, an emotionally guarded young lady, several possible love interests, meddling little sisters, an older sister/confidant, and a cart of reasons for our main characters to act the way they do. The plot of the story is cliché, but each character brings a small part of reality to the movie and makes To All the Boys I’ve Loved Before relatable to its viewers.

Some characters needed to be fleshed out like Genevieve, Gen for short, or even Lara Jean’s other three crushes. Gen is the stereotypical popular girl. She was Lara Jean’s friend until middle school when the two had a falling out. It was petty and a rough outline of what Gen should be like as a character. One of Lara Jean’s past crushes, Lucas, suddenly turns into her friend after receiving his letter. Their appearances are short snippets and only act as little sparks to keep the movie going. Many characters fit this scenario, where they are introduced and placed into a specific mold only to be seen for a few minutes every time, but what can you do when you only have 99 minutes to act out a 300+ page book. Lara Jean is half Korean, half white teenager that loves to fantasize about romantic relationships but has never been in a relationship herself, Peter Kavinsky is the popular sweetheart that is insecure underneath his daily persona, Margot is the mature and caring older sister, father Dr. Dan Covey is the dorky and lovable father figure, and Josh Sanderson is the older brother-like boy next door.

The movie proceeds because of Lara Jean’s inner conflicts, i.e. not revealing how she really feels, but the drama further unfolds when more people come into her life. The first boy in Lara Jean’s list of possible significant others, her neighbor and older sister’s ex-boyfriend, Josh Sanderson is already crossed off because of Lara Jean’s strong relationship with Margot. While they had a strained relationship after Margot broke up with Josh, Lara Jean and Josh maintained a healthy friendship. And so, we move on to Peter Kavinsky. He’s young, cute, athletic, and emotional with a heart of gold and plays Lara Jean’s fake-boyfriend for most of the movie. He wants to date Genevieve again after their break up but realizes he has romantic feelings for Lara Jean. It’s cliché because, as a viewer, I see jock guy falling for nerd girl. But it’s believable to an extent because they have had some history together, not just meeting each other at some middle school party, but they have known each other since that party.

To All the Boys I’ve Loved Before is an endearing movie but I think a major message is easily sent out through it, “say what you feel before (anything drastic happens) it’s too late.” But my question is, “did Lara Jean ever get her scrunchy back?”

Posted by Mariah Bonifacio at 8:17 AM