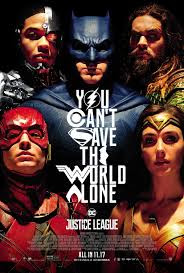 Plot Summary:
Fueled by his restored faith in humanity and inspired by Superman’s selfless act, Bruce Wayne enlists the help of his newfound ally, Diana Prince, to face an even greater enemy. Together, Batman and Wonder Woman work quickly to find and recruit a team of metahumans to stand against this newly awakened threat.  But despite the formation of this unprecedented league of heroes—Batman, Wonder Woman, Aquaman, Cyborg and The Flash—it may already be too late to save the planet from an assault of catastrophic proportions.
source

Well, it has been a while for me to be posting reviews. So... okay... I am finally getting to this review.

I enjoyed this! Sure, there was a lot of mixed reviews, mostly not-so-good ones. But, I enjoyed watching this. At different points of the movie, I thought it felt clipped. The CGI effects were good. The story was was okay, not outstanding. The humor and drama was balanced. Casting of these iconic superheroes, I would say, is on point (of course, that's just me). The cast chemistry worked. The characters were likeable and developed enough for this movie. The action was not lacklustered. It did get the "blood pumping." Yah, action was not disappointing. Otherwise, Justice League was very entertaining and fun to watch.

Sure... Justice League fell short in a lot of critics' reviews, but as a fan, I enjoy watching favorite/iconic superheros come to life in live-action films. I like the casting. I like that these films are entertaining, funny, with the right amount of drama and action. I am looking forward to watching all the character solo films and the next Justice League films.

Posted by Jasmine Albitos at 9:03 PM