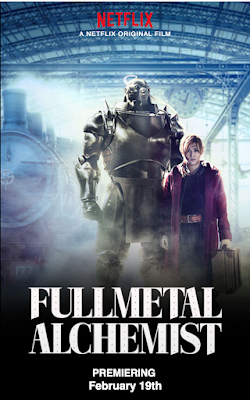 Based on the Manga series by:
Hiromu Arakawa

Plot Summary:
While alchemist Edward Elric searches for a way to restore his brother Al's body, the military goverment and mysertious monsters are watching closely.
source

For what it’s worth, as a standalone movie, FullMetal Alchemist (2017) lacks much story, emotional connection, and gives a weak plot but as an anime live-action, FullMetal Alchemist (2017) is a satisfactory adaptation the anime community can rejoice about. FullMetal Alchemist (2017), although it deviates a little from the original series, has everything it needs to be a part of the popular anime and manga series, action, lighthearted moments, dramatization, and mystery. It is also a good, quick introduction to those unfamiliar with the FullMetal Alchemist manga by Hiromu Arakawa. The movie makes a quick overview of all the characters and assumes the viewers are familiar with each person in the main cast i.e. Edward Elric, Alphonse Elric, Winry Rockbell, Maes Hughes, and Roy Mustang. The introduction of the homunculi Lust, Envy, and Gluttony make them a mysterious trio with influence in the military but hardly expands on their motives. The movies’ main antagonists shift from Shou Tucker to General Hakuro and then homunculi so swiftly that there is no time to hate any of them. Except for Tucker. To say the least, he’s still a selfish and depraved scumbag like in the anime and manga. The movie flows so quickly it’s difficult to properly make an emotional connection with the characters. So, it doesn’t bring the anime and manga’s original intensity and seriousness. Because of it is a quick introduction and overall mystery, FullMetal Alchemist (2017) leaves the live adaptations open to more productions.

The characters may have been swiftly introduced but I can’t deny that I liked the acting. Ryosuke Yamada makes a strong impression as Edward Elric. He had Edwards’ pipsqueak, teenage voice down to a T, Edwards’ rage when he fought Al, but I would like to say Yamada’s reactions to being called short could use more comedic rage to them. Ryuta Sato as Maes Hughes is energetic, friendly, and a loving father-figure that the Elric brothers didn’t have growing up. Overall, I believe my favorite actor is Yasuko Matsuyuki who plays the homunculus Lust. During the each of her appearances in the movie, I was fixated on how she carried Lust’s persona. Matsuyuki’s Lust gave me the impression of both 2003 and 2009 Lust, which is an interesting combination because 2003 Lust is more human while 2009 Lust is an arrogant and faithful homunculus. She was elegant and dignified with Lust’s malice in her voice but dies with an inkling of humanity in her final thoughts. Many of the others fulfilled their roles and I hope they reprise their role into the next possible live-action FullMetal Alchemist (2017), mostly for continuity. I can’t un-see the actors that have taken their role as their respective FullMetal Alchemist characters. It also has the chance to continue building the story, characters, and add more characters from the original series such as Greed, Scar, or Bradley.

Instead of looking at FullMetal Alchemist (2017) as a FullMetal Alchemist the manga and anime-based movie and more like a standalone film, the story is rushed, characters get very little to no backstory, and the antagonists are easily killed. Now going back to it as a faithful adaptation, it loosely follows the manga most notably when Lust briefly mentions the homunculi’s creator and frequently calls Edward “a good sacrifice.” The movies’ Shou Tucker plays a slightly larger role in comparison to his anime and manga counterpart by kidnapping Al and Winry. But overall, the movie seems to hint at the homunculus having power in the military and therefore sets them up as the possible major antagonist in later productions. If I had to make complaints about FullMetal Alchemist (2017) as a live-action adaptation, I wish Envy’s character in the movie had more of the sass and arrogance of the manga’s Envy. The movies’ Envy was more disgusted with humans but wholly said nothing against humanity. The movie introduces the lesser homunculi too early as the movies’ antagonist, General Hakuro, uses them in a failed plot to take over the world. I won’t say FullMetal Alchemist (2017) is a spectacular, God-sent live-action, but it certainly is refreshing.

Posted by Mariah Bonifacio at 12:55 AM