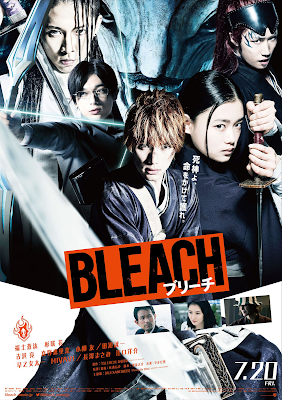 Based on the Manga series by:
Tite Kubo

Plot Summary:
When high schooler Ichigois suddenly given reaper abilities, he really wants to give the powers back. But he'll have to reap some souls first.
source

The original allure, action, and mood of the anime and manga Bleach are brought back in the Bleach (2018) live-action movie, but could we fix Rukia Kuchiki’s’s hair or majority of the character’s hair. Their hairstyles would look weird, but Bleach isn’t exactly normal when we think about ghosts, spirits, and hollows running around. The live action version brought back slicing up hollows, shooting arrows, and the shōnen feel of Tite Kubo’s popular manga series thanks to Kubo’s involvement in the movie’s production. As a Bleach fan, I can’t complain about the storyline of the live action movie because of how closely written it is to the anime and manga. The world of Bleach was easily introduced by explanations from the characters and demonstrations of power such as when Uryu Ishida revealed his Quincy powers to a recently made substitute soul reaper Ichigo Kurosaki. The concept of hollows and lost souls were introduced in a familiar fashion for faithful fans of the series but also broken down into its simplest components for new viewers. Bleach (2018) kept the original humor in Ichigo’s repetitive interactions with his classmates, particularly who I assumed was one of Ichigo’s friends named Keigo. In a short summary, Ichigo Kurosaki got help from a soul reaper, befriended them, and the story follows his intense battle scenes to protect his friends.

The live-action film also kept the personalities of these characters, save for the short appearances of characters like Keigo. Ichigo Kurosaki was an average high schooler with a big heart but a lot of fight in him, Chad was a silent and protective giant, Orihime still had an unrequited crush on Ichigo, and Rukia Kuchiki was a serious soul reaper but was naïve to modern Japan and its trends. The Rukia of Bleach (2018) was as mysterious as manga Rukia when she was first introduced. But her relationship with her elder brother was made clear despite only a few moments of screen time together because of the sincerity of Hana Sugisaki’s performance as Rukia Kuchiki. Sugisaki’s Rukia respected Byakuya much like her manga counterpart. As Bleach’s (2018) main character, Ichigo was given the most backstory and character development for his skills and abilities. It may have seemed rushed, but the message got across. But other characters fell flat in comparison. It was easy to tell Chad and Orihime were familiar with Ichigo but they never surpassed being his classmates despite Chad and Orihime being main characters later in the original series.

When talking about Bleach, we need to keep in mind the sword clashes, monsters, bloodshed, and destruction of buildings. My commentary on the action from the movie is “it’s not cheesy.” I did not see a slow motion, in the air choreography. It felt like real-time life or death situations. Renji’s Zabimaru, the released version of his katana, flowed, retracted, and clashed with Ichigo’s over-sized katana with fluid motion. Grand Fisher was a large and destructive hollow, but it looked more plant-like rather than a hollow covered in fur. Bleach (2018) covers the most important aspects of the first arc and I’m not wholly disappointed. After Ichigo met Rukia, I wished the movie had more content like showing Chad and Orihime’s abilities. Considering it was one arc of the anime and manga condensed into a movie, the Bleach (2018) team had to wrap up the Agent of the Shinigami arc in the too short amount of a time. If they wanted to continue into the Soul Society arc, other characters could have been fully introduced and their personalities expanded upon.

Posted by Mariah Bonifacio at 9:07 AM