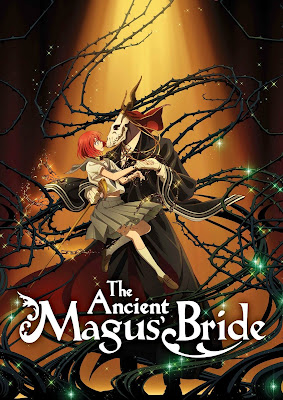 Plot Summary:
Chise Hatori, a 15-year-old Japanese girl, was sold for five million pounds at an auction to a tall masked gentleman. Abandoned at a young age and ridiculed by her peers for her unconventional behavior, she was ready to give herself to any buyer if it meant having a place to go home to. In chains and on her way to an unknown fate, she hears whispers from robed men along her path, gossiping and complaining that such a buyer got his hands on a rare "Sleigh Beggy."

Ignoring the murmurs, the mysterious man leads the girl to a study, where he reveals himself to be Elias Ainsworth—a magus. After a brief confrontation and a bit of teleportation magic, the two open their eyes to Elias' picturesque cottage in rural England. Greeted by fairies and surrounded by weird and wonderful beings upon her arrival, these events mark the beginning of Chise's story as the apprentice and supposed bride of the ancient magus.
source

I’m alive! When was my last post? July? Well, now I’m here to talk about The Ancient Magus’ Bride. The Ancient Magus’ Bride is set in rural England, where one masked magician Elias Ainsworth, lives. Chise Hatori, a fifteen-year-old Japanese girl, “sleigh beggy,” and our main heroine is quick to call his cottage her home. The mood that the story brings with magical creatures is oddly amplified in the countryside, where fairies, animals, plenty of flora, nature, and a few humans can interact. Here, in the countryside and other prairies later seen in the series, Elias introduces an entirely new world to Chise. She meets the fairies of the woods, other magic practitioners, her familiar who she names Ruth, and the series’ antagonist Cartaphilus. It is the perfect place for our two protagonists to grow their relationship as a student-teacher and future bride and groom. The countryside gives The Ancient Magus’ Bride an airy, dreamy vibe where the two can freely express themselves and practice magic without the hustle or cramped streets of a city. Elias can get all the necessities for Chise to become his apprentice in this area, but on those off occasions where they need to the city, all it takes is a walk to the nearest train station and a ticket to board. So, if a random passerby sees a commercial for The Ancient Magus’ Bride, they would see stunning visuals, animation, and plenty of glitter but that doesn’t mean Ancient Magus’ Bride is all about the magic and sad backstory. Included in the series is comedy, chibi animation, and slice-of-life. As a weekly viewer, I saw characters simplified facial expressions, dramatic shadows, and breathtaking scenery. Some people who have read the manga, claim to have not been disappointed. The art is magnificent, I must say.

The characters in Ancient Magus’ Bride are well written to display the subtle changes and character development throughout the series. For example, whether Elias realizes or not, by simply calling Chise “family,” he has found someone to spend his years with. Chise in return grows from being a hopeless and lonely child, ostracized and abandoned by her blood relatives in Japan, to a mature young woman that is trying her best to adapt to the world of magic. The characters’ flashbacks and pasts are limited and made me want to learn more about the character. With Chise being one of the main protagonists, much of her past is revealed with flashbacks that show us her mother’s suicide, her relatives abandoning her, and her lonely childhood that led her to give herself up to human auction. From all her past trauma, Chise finds a place to call home and becomes more determined to maintain her place of belonging. On the other side of our protagonists, Elias seems cold and callous, but he is not only Chise’s magic teacher, Elias is also Chise’s student to better understand human emotions and human customs. He becomes more open with Chise and others the more he spends time with her. It’s not only the viewer that watches Chise and Elias grow fond of each other, but other characters notice their development too. Chise and Elias’s friends become an extended family and their world continues to grow.

As for the series’ antagonists, a few people show up and become allies such as Mikhail Renfred and Alice Swayne, but one stands out as an ongoing threat to Chise and Elias. Cartaphilus, in the body of a boy named Joseph, continually interrupts the peaceful atmosphere of Chise’s life. He is mostly seen as a necromancer, who experiments with the dead so that he can live his eternal life without pain or suffering. Cartaphilus/Joseph wants to use Chise’s body as his own because of Chise’s innate ability as a sleigh beggy to both generate and absorb a large quantity of magical energy and therefore heal herself. On a larger scale, Cartaphilus is a minor villain in comparison to other anime antagonists with a desire to destroy the world order or antagonists with armies. He is sympathetic to a point because while some people would want to live forever, the condition of one’s body still rotting from old age and injury is not so appealing.

Everything in The Ancient Magus’ Bride becomes a beautiful masterpiece but some criticism is expected. The ones that I have come across are “Chise is too young for Elias (who is a magical being that can outlive anyone)” and “Chise is useless. She relies on Elias too much.” I can see these as valid points because Chise is fifteen at the beginning of the series and had a depressing gloomy, “I don’t have a reason to exist” personality. In the despair of her circumstances, Chise made the conscious decision to become his apprentice and future bride. Elias also takes it upon himself to protect and shelter Chise. From the very beginning, it’s expected of the plot and character development for them to grow fond of each other. The Ancient Magus’ Bride is a charming story of two individuals that are learning to become mentors, friends, family, and eventually a married couple… a story where all their friends take note of how Elias and Chise already argue like a married couple or even mother and child. Since the manga is ongoing, Elias and Chise have plenty of time to let their feelings for each other grow and the anime has a chance to expand on their relationship for the future.

With all that being said, if I have ever recommended any other series, movie, book, or manga to you, I now say, “put that on the backburner…” with maybe the exception of Kimi no Na Wa, that movie is beautiful. I’m giving all the people who read this review a new recommendation. It’s heartwarming, especially the scene where Chise finished her staff and flies back to Elias. In that scene, I could see Chise’s freedom. She can choose her family, friends, and the future ahead of her. I can also see how grateful she is to have met Elias and everyone else in the story. I think it has a beautiful soundtrack, visuals, and an enchanting story. I love The Ancient Magus’ Bride just as much as Naruto or Shigatsu wa Kimi no Uso.

Posted by Mariah Bonifacio at 6:25 PM