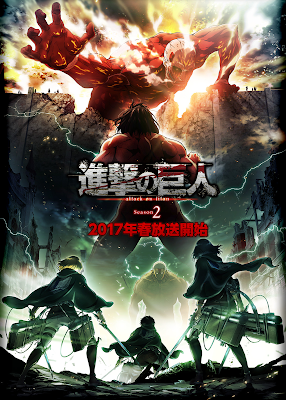 Plot Summary:
For centuries, humanity has been hunted by giant, mysterious predators known as the Titans. Three mighty walls—Wall Maria, Rose, and Sheena—provided peace and protection for humanity for over a hundred years. That peace, however, was shattered when the Colossus Titan and Armored Titan appeared and destroyed the outermost wall, Wall Maria. Forced to retreat behind Wall Rose, humanity waited with bated breath for the Titans to reappear and destroy their safe haven once more.

In Shingeki no Kyojin Season 2, Eren Yeager and others of the 104th Training Corps have just begun to become full members of the Survey Corps. As they ready themselves to face the Titans once again, their preparations are interrupted by the invasion of Wall Rose—but all is not as it seems as more mysteries are unraveled. As the Survey Corps races to save the wall, they uncover more about the invading Titans and the dark secrets of their own members.
source

Note: This review contains spoilers
Shingeki no Kyojin, in English known as Attack on Titan, is an anime and manga of the same name and has just finished airing its second season. The first season didn’t leave me with any long-lasting impressions, other than the pretty graphics and art style. It isn’t until I was encouraged to watch season 2 that my interest rose to a fine peak but first a brief commentary of season 1. Season 1 left the impression of another simple shounen anime wherein the main protagonist, Eren Jeager, becomes a part of the Survery Corps and gains numerous power ups. The designated heroine, Mikasa Ackerman, is someone of interest and arguably someone to look up to as a soldier but as a normal person she has a one-track mind focused on Eren, his survival, and a strongly hinted romantic interest. The assumption of Eren being a stereotypical shounen protagonist wasn’t necessarily wrong but season 2 delves deeper into the rabbit hole. Season 2 continues where season 1 left a large cliffhanger. While the characters are a bit placid in development there are exceptions such as Reiner Braun, Krista Lenz/Historia Reiss, Annie Leonhart, Bertholdt Hoover, and Ymir.
The plot thickens as we, the viewer, learn more about the Walls (Maria, Rose, and Sheena), the spies that have infiltrated the Survey Corps and with the appearance of a Beast Titan with human comparable intellect the necessity to find out what lies outside of the Walls becomes greater. Life inside the Walls is stagnant and suffocating because humanity is trapped in fear by titans but in season 2 we learn there is an outside world in which Reiner, Berthholdt, Annie, and Ymir were a part of. Attack on Titan becomes more than just a dystopian, fighting anime and manga where humanity cowers in the corner with a knife in its hand. Reiner is the Armored Titan, Bertholdt is the Colossus Titan, we should already know Annie is the Female Titan, and Ymir is a Titan. The three aforementioned characters have their own joined agenda for being in the Walls while Ymir is fixated on Krista, real name Historia. Each of them have a mysterious past that is waiting to be revealed, although Ymir’s past was explored. Never mind “what’s in Eren’s basement” anymore.
There are still mysteries to be unfolded and season 2 ends with Ymir, Bertholdt, and Reiner escaping to the fallen Wall Maria and Eren vowing to become useful to humanity with his titan powers. While season 1 felt stagnant, season 2 makes me curious about the events that will unfold in season 3 which is scheduled for a 2018 release. 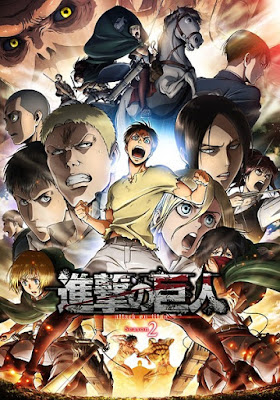 Posted by Mariah Bonifacio at 8:31 PM