We are thrilled to be taking part on this Blog Tour for Michael Johnston's Soleri, the first book in the Soleri series, especially since today we also are celebrating this book birthday!!! The tour will consist of various posts from participating blogs!!! Today, we will be sharing a sneak peek into the book with an exciting excerpt! We can't forget that there's a cool tour-wide giveaway, too! So... Check it out and grab your copy today!!!
Follow the tour, HERE! 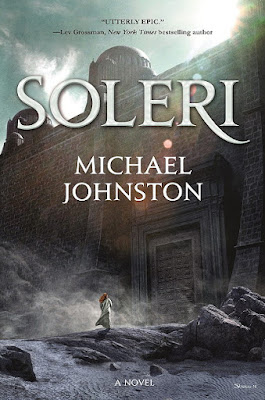 Synopsis:
Michael Johnston brings you the first in a new epic fantasy series inspired by ancient Egyptian history and King Lear.The ruling family of the Soleri Empire has been in power longer than even the calendars that stretch back 2,826 years. Those records tell a history of conquest and domination by a people descended from gods, older than anything in the known world. No living person has seen them for centuries, yet their grip on their four subjugate kingdoms remains tighter than ever.On the day of the annual eclipse, the Harkan king, Arko-Hark Wadi, sets off on a hunt and shirks his duty rather than bow to the emperor. Ren, his son and heir, is a prisoner in the capital, while his daughters struggle against their own chains. Merit, the eldest, has found a way to stand against imperial law and marry the man she desires, but needs her sister’s help, and Kepi has her own ideas.Meanwhile, Sarra Amunet, Mother Priestess of the sun god’s cult, holds the keys to the end of an empire and a past betrayal that could shatter her family.Detailed and historical, vast in scope and intricate in conception, Soleri bristles with primal magic and unexpected violence. It is a world of ancient and elaborate rites, of unseen power and kingdoms ravaged by war, where victory comes with a price, and every truth conceals a deeper secret.

Will I see the sky today?
Ren Hark-Wadi sat in darkness, awaiting the sunrise. As the first finger of dawn came sliding down the steep wall of the lightwell, it changed the color of the stones in his cell from black to brown to a faint, muddy yellow. Ren stood from his wooden pallet, took a scrap of polished iron from beneath his blanket, and slid the metal through a narrow slot in the window. It caught the light, filling the small chamber with streaks of blue- gray illumination. Ren let the faint rays wash over his face, hoping they might warm his skin, but the light was too dim.
Perhaps the upper rings can see a bit more of the sky? He didn’t know.
He leaned closer to the window, pressed his head to the slot, and peered upward. If he held himself just-so, sometimes he could see a wedge of sky— a blue sliver no larger than a nut. In his free moments, when he was certain no one watched, he would stare at that blue dot till his neck cramped, hoping to catch sight of a bird or an errant cloud, some sign that the world outside existed, that the breeze blew and the clouds drifted, but his neck was too stiff to find the sky that morning. He saw only rows of narrow windows, one above the next, five rings of arched windows, one for each level of the Priory, trailing far underground where the out- side world never intruded— where the outside world, and all the people in it, were nothing but rumor.
Maybe tomorrow. Maybe then I’ll be able to steal a glimpse of the world beyond these walls.
Dousing himself with a bucket of foul gray water, his morning shower, Ren sputtered, rinsing the sleep from his eyes, as well as yesterday’s dirt from his cheeks and his long hair, which was always flopping into his face. The water poured across the floor and out to a stone scupper, where it dis appeared. He suspected that it was simply used again the next day, the same water with more grit in it. The men who ran the Priory were nothing if not stingy with the necessities of life.

What Others Are Saying About Soleri

“Prepare to be ensnared in a web of ruthless politics and unbridled ambition, where even the authority of the emperor may be based on an ancient deception. Johnston builds an immersive world with elements of Egyptian and Roman history, myth, and religion. This story seethes with twists and turns, betrayals and secrets, and will keep you guessing until the very last page.” ―Cinda Williams Chima, New York Times bestselling author

**About the Author**
Michael Johnston was born in 1973 in Cleveland, Ohio. As a child and a teen he was an avid reader of science fiction and fantasy. He studied architecture and ancient history at Lehigh University and during a lecture on the history of ancient Egypt, the seed of an idea was born. He earned a master’s degree in architecture from Columbia University, graduating at the top of his class. Michael worked as an architect in New York City before moving to Los Angeles. Sparked by the change of locale, a visit to the desert, and his growing dissatisfaction with the architectural industry, he sought a way to merge his interests in architecture and history with his love of fantasy. By day he worked as an architect, but by night he wrote and researched an epic fantasy novel inspired by the history of ancient Egypt and the tragic story of King Lear. After working this way for several years, he shut down his successful architecture practice and resolved to write full time. He now lives and writes in Los Angeles with his wife and daughter. 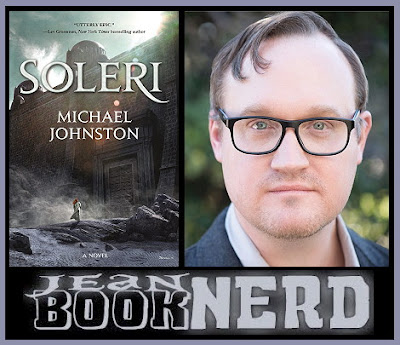