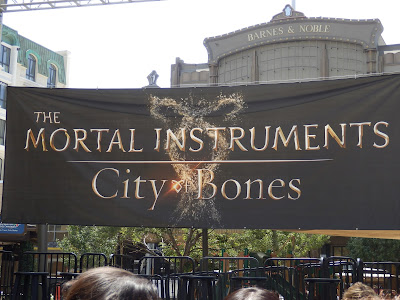 On August 13, 2013...yes, the day after the star-studded premiere, the cast attends a Q&A at The Americana at Brand, a last minute stop added to the TMI mall tour schedule. How amazing was that! Another chance to meet the cast of The Mortal Instruments: City of Bones! Again, fans camped out for this exciting event. However, we, on the other hand, were exhausted and we decided to sleep for a few hours in the motel room. Even with the alarm clock set, we slept right through it...that's how exhausted we were...haha! As soon as we realized the time, we hurriedly rushed to get ready and make our way to The Americana at Brand where the TMI Mall Tour was being held. Luckily, we had friends that held spots for us in line...huge "THANK YOU" to Perla, Kristen and Louise! You girls are AWESOME!

As soon as we arrived, we found our friends in line, and we excitedly chatted about The Mortal Instruments and other fandoms! Yes, we gushed like a fangirl, discussing all that we are passionate about...haha!! As the hours passed, security had finally moved the line onto the grounds nearby where the Q&A was to take place. We have even noticed that the stage was already set up since the day before. Of course, we all knew that there were a limited amount of wristbands to be given out on a first come first serve basis. And, yes, we were among the ones to receive a wristband. Only those that received wristbands availed of the signing after the Q&A. Woohoo!!!
Security then announced that we will be able to wait in the VIP section of the Green, which was right in front of the stage! Since it was hours until the event would start, those who had a wristband were able to go in and out of the VIP area to get drinks and/or food. And, boy, was it a hot day! The Americana staff even started handing out water to everyone! Whew! That was a huge help! All the while we waited, we found out that get rune tattoos put on and get a make over by NYX! How cool was that!

Although it was a hot day, everyone was too excited to leave the area, especially since it was "standing room only." No one wanted to lose their "spot"...LOL! Of course, we were among those fans...haha! We definitely wanted to be able to get a good view of the stage once the Q&A started! And, again, we were among the same friends from the premiere! Being among friends made the wait bearable...even under the sun. But, boy, was it a huge turn out...even under the blazing sun!
After all that waiting, the hour came around that this exciting event started. Our host Jojo Wright from KIIS-FM got the event started with showing the trailer for this exciting new film. After watching the trailer and fans cheered, Jojo Wright introduced our illustrious guests to the stage! It was amazing! Our guests included: Harald Zwart (director), Casandra Clare (author), Kevin Zegers (Alec Lightwood), Robert Sheehan (Simon Lewis), Jamie Campbell Bower (Jace Wayland) and Lily Collins (Clary Fray).

View the album of this event at: Movies, Shows & Books

We were able to capture this event on video...as well as we could. Check out the video clips from this exciting and fun event!


Wow! They were so amazing, and having fun while at it! We loved every minute of it! Despite the exhaustion, the heat and the crowd, we enjoyed every minute of it! As soon as the Q&A was over and the cast left the stage, the Americana staff hurriedly arranged tables on the stage for the signing part of this incredible event.
We excitedly waited for our chance to climb the stairs to the stage...to just briefly chat with them was a wonderful experience. Of course, we just had to tell them how much we loved the movie! I was so awestruck when Jamie Campbell Bower asked Mariah if she liked the movie; and Mariah replied to him that she didn't want to leave the theater...hahaha!! It was great! They all asked if we loved the movie...our reply over and over was "yes! we loved it!" All the while, they were signing our posters! I even asked them if they could sign our premiere tickets...yes, those are our souvenirs from the exciting premiere night at the Arclight in Hollywood! They were all too kind to do so, especially since by the time we got to the stage...we were not permitted to take pictures, and we were not permitted to have more than one item signed. However, they did sign our tickets...yay! I even told Lily Collins that loved the movie, and that premiere night was a mother/daughter time at the movies. She loved it! I even told Robert Sheehan that he was absolutely hilarious as Simon Lewis! He was all smiles! When we got to Cassandra Clare and Harald Zwart, they asked us what we thought about the movie. We told them that we loved it! And, in my opinion, the film captured the heart and essence of the novel. They were so awesome to talk with, but, alas, time was short and there were many fans still in line.

After we had our turn for the signing, we grabbed some swag from the TMI booths that were set up behind the stage! Woohoo!! What a fun way to end the event...with swag!! Yay! These are definite memories with my fangirl friends...haha!!
And, that concludes the three whirlwind days of The Mortal Instruments events!!! At the end of the day, Mariah and I made that drive home to Coachella. Although we went home exhausted, sore and sunburnt, we had an unbelievably incredibly fun time for those three amazing days! And, we'll do it again for the next film, City of Ashes....hahaha!!!

The Mortal Instruments: City of Bones
In Theaters August 21, 2013
Posted by Jasmine Albitos at 2:00 PM