'The Mortal Instruments: City of Bones' Los Angeles Camp Out! 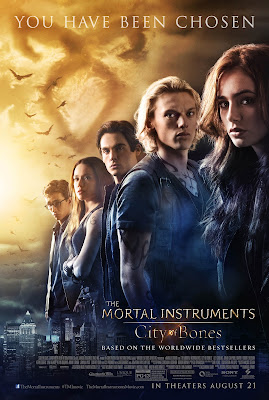 What an adventure...all for The Mortal Instruments: City of Bones! Yes, we were definitely living it up as fangirls...from camping out on Sunset Blvd. to standing out under the hot sun at The Americana at Brand. There was no question about it, Mariah and I just had to be a part of this amazing phenomenon! Those three days were exciting and fun as we camped out and hung out with several friends who are also major Cassandra Clare fans.

Where to begin!?! Let's begin with the camp out! Yes, we did camp out on the streets of L.A. just so we can be a part of this awesome experience. At first, we were planning to drive out to L.A. late Sunday night... especially since we just got back from an overnight trip to Arizona! But, then, my awesome fangirl friend, Victoria, messaged me about a tweet by Harald Zwart, the director, about visiting the fan camp and bringing soup. Well, that woke me up! My other fangirl friend, Cassandra, also decided to camp out as well, after seeing Harald's tweet.  Mariah and I met up with Cassandra, then we made our way to the Arclight in Hollywood for the fan camp. I would say we arrived around 10PM, and we met up with other fangirl friends... we even, finally, met our friend, Diana, who flew all the way from London! We weren't many fans, but we were enough to have fun!


After setting up next to our friend Diana, we chatted with a few friends...all in different parts of the line! Yes, we had friends that started the line as early as 1PM on Sunday! That's dedication! It was like a big party! Everyone was so excited that we are all up chatting with everyone!
As the midnight hour came to pass, Harald Zwart, Veslemoy Ruud Zwart and friends visited the fan camp and brought hot soup! How awesome was that! Not only did they bring soup for the fans, Harald and friends hung out, gave authographs, took photos and chatted with the fans. Everyone was giddy with excitement! It was great to actually meet the director of a movie that we all were excited for! I was and still am in awe that they are as excited as we are for this movie!

We were not only visited by Harald Zwart and friends, the ladies from several fansites: Mundie Moms, Fangirlish, TMI Movie News, The Mortal Institute, Page to Premiere, TMI Source and more! The most exciting part was the contests that they were having on the spot! The winning prize...tickets to watch the movie with the cast!! Woohoo!! I so wanted to win, but like with any contest...it's all about chance. And, guess what! We did get that chance! Erin from Fangirlish announced a contest..."Who's here as mother/daughter?" Oh wow! Mariah and I can definitely win that; we are, after all, mother and daughter...hahaha!! Yes! We won a couple tickets...woohoo!! I was so "over the moon" giddy with excitement! These awesome ladies continued with the contests until they have given away all the tickets that were in their possessions. Yup! A bunch of eager fans won tickets! Yay! After all the excitement, everyone settled in for a chilly night on Sunset Blvd.

Early Monday morning, fans were visited by a cast member! We woke up to the sweet sound of Kevin Zeger's voice! What a way to start of the morning! Guess camping out paid off...haha! He greeted and brought cookies for us! How awesome was that! When he got to our side of the camp, I congratulated him on his nuptials to Jaime Feld! That definitely brightened his smile...I could only smile in awe! It was an amazingly beautiful Monday morning! Kevin handed out cookies, chatted, signed and took photos with fans! We were absolutely giddy!
The visitations didn't end there!! A few hours later, we were visited...again, by Jessica Postigo, the screenwriter! She and her husband, Eric Paquette (senior VP for Sony Pictures), came by Sunday afternoon and found that fans started to create a line...a fan camp! Bummed that I missed that, but I needed the nap after driving back from Lake Havasu! But, no big loss, we got our chance to meet Jessica Postigo on Monday morning! Wow! I am always in awe to meet the people behind the film, since cast AND crew puts their whole heart into making this book come to life. Jessica was such a pleasure to meet! It was so wonderful to see how excited she was when she saw how excited and dedicated we were...camping out and all!
What other words can describe this camp out experience!?! The only words that keep coming to my mind was: AMAZING, FUN, EXCITING and MEMORABLE! Not only did we meet Harald Zwart (director), Jessica Postigo (screenwriter) and Kevin Zegers (Alec Lightwood); we also met various wonderful ladies from popular fansites! In addition to meeting them, we also met and befriended a variety of young ladies from around the globe to be here for this wonderful event, such as the wonderful ladies, Lilliana of Shadowhunters Colombia, Alessa of Shadowhunters Venezuela, Diana (from London), Irish shadowhunters and so many more! I have found that many fandoms like this one brings together a variety of fans of all ages, and have made many friendships because of it! We had an amazing time camping out!


For the full album of the camp out, go to: Movies, Shows & Books


Till the next camp out for the next film of The Mortal Instruments saga:
City of Ashes
Posted by Jasmine Albitos at 10:30 PM