St. Vladimir's Academy isn't just any boarding school - it's a hidden place where vampires are educated in the ways of magic and half-human teens train to protect them. Rose Hathaway is a Dhampir, a bodyguard for her best friend Lissa, a Moroi Vampire Princess. They've been on the run, but now they're being dragged back to St. Vladimir's - the very place where they're most in danger. Rose and Lissa become enmeshed in forbidden romance, the Academy's ruthless social scene, and unspeakable nighttime rituals. But they must be careful lest the Strigoi - the world's fiercest and most dangerous vampires - make Lissa one of them forever.

Vampire Academy is the first book of a series of the same name about two races of vampires. The Moroi are one race of vampires that are alive and manipulate elemental magic. The Strigoi are undead and evil -- feeding on the innocent, including Moroi, to survive. Rose Hathaway - a half-vampire with poor impulse control - is training to be a bodyguard for a Moroi princess. Learning to decapitate and stake is hard enough, but Roses real danger may lie in an illicit romance with one of her instructors...

Vampire Academy and all the other books in the series are available now at:
Amazon
Barnes and Noble
Penguin
Mysterious Galaxy

My Thoughts
Richelle Mead amazes me with her ability to develop her characters and the world they live in. Look at Rose, a young Dhampir, in training to be guardian to one of the Moroi royalty who happens to be her best friend. she's young and reckless, but she takes her responsibility to Lissa very seriously. With every turn of the page, the story of why they ran away from the academy is revealed. In addition to that, a mystery unfolded in which turned into a conspiracy. Of course, a forbidden romance, was blooming; which, of course, made their plight even more compelling and riveting. I was so drawn into Rose and Dimitri's interactions and their struggle to keep control of their budding feelings for each other.

Yes...I gave in! I have been told nothing but good things about this series. As much as I resisted, after meeting Richelle Mead and after reading Gameboard of the Gods, I gave in to the "pressure" and read this first book of the Vampire Academy series.  So, yes, I loved it! I already know, after reading this book, that I will have to continue reading the entire series to get to the conclusion of this amazing and compelling series.

Just in this first book, Vampire Academy had intrigue, mystery, teenage angst and romance. Everything that makes any young adult novel fascinating.

I am also looking forward to watching the film, Vampire Academy: Blood Sisters, based on this book.

I would definitely recommend this to other readers!

Check out my post on the Richelle Mead event at Mysterious Galaxy San Diego on June 6, 2013, check it out here:
Richelle Mead Talks Gameboard of the Gods 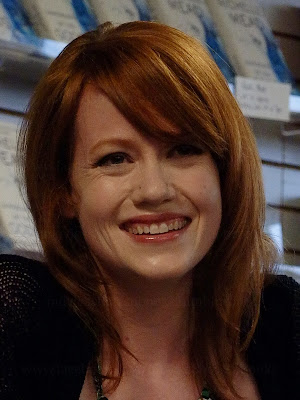 Richelle Mead is a New York Times and USA Today bestselling author of urban fantasy books for both adults and teens. Originally from Michigan, Richelle now lives inn Seattle, Washington where she works on her three series full-time. Before becoming a writer, she considered a few different career paths. She received a liberal arts degree from the University of Michigan, an MA in Comparative Religion from Western Michigan University, and a Master in Teaching (Middle & High School English) degree from the University of Washington. In the end, she decided writing was the way for her but believes all of her education prepared her for it.

Posted by Jasmine Albitos at 1:19 PM