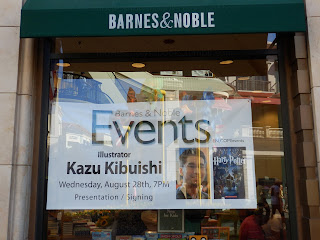 August 28, 2013 was a night filled with events! One such event was being held at the Barnes & Noble at The Grove! Kazu Kibuishi, illustrator and graphic novel author, was on hand to do a presentation and signing for fans at this particular Barnes & Noble. It definitely was an exciting night!

As soon as I purchased my Harry Potter box set and got our wristbands, we went straight to the event area to sit down since we still had a few hours to kill before the event with Kazu Kibuishi. While Mariah did her homework, I made my rounds taking pictures with my camera, and also with my phone so I can post it on my social networks! As I made my way down to the first floor, I glanced over and saw Kazu Kibuishi and family talking with events manager, Lita Weissman! Of course, I didn't want to interrupt their discussion about the night's event, so I went about taking photos! I then made my way back up to the third floor to the events area, and, guess who I saw making their way there, too! Yup! Kazu was also headed for the events area with Lita! He wanted to get an idea of what the area looked like, so he can set up to do a demonstration. I had a chance to meet Kazu and his family! Awesome moment!
As the minutes ticked away, more fans trickled into the events area. At first, the fans that arrived were mostly Harry Potter fans; however, as time got closer to the event, the events area filled up quickly, especially with young children whom were fans of Kazu because of his graphic novels, such as: the Amulet series and the Daisy Kutter series. Wow! The area filled up quickly...it was an amazing turn out!
The event then started with Kazu Kibuishi speaking about how he started, especially since he doesn't think he's a very good artist. It was very interesting how he got into this industry...by accident...haha!!! It was very interesting to learn about his background, especially how he started off in the film industry. So, he definitely had an interesting career background from film to comics. Kazu also elaborated on his graphic novel series, The Amulet series, and its history.

Kazu Kibuishi also discussed many of his works and his inspirations for his art. It definitely was storytelling time as Kazu walked the audience through a brief description of his career history. We even got a look at his studio apartment (pre-marriage) and his production office where all his illustration magic happens. He then discussed his assignment to design the covers for the Harry Potter books for its 15th Anniversary. With the help of Jeff Caffoe, his lead production assistant, Kazu demonstrated to the audience how he begins to draw and answer audience questions while at it.  At some point, Kazu had to put the microphone down so that he could draw...haha!
It was amazing to watch Kazu draw! He started off with just miscellaneous scribbles and shapes, and it turned into something it was amazing. I was blown away at what he was drawing! He drew a few shapes and shades...and, poof, it was a view of mountains and hills. Even without too many details, Kazu drew out a breathtaking view. 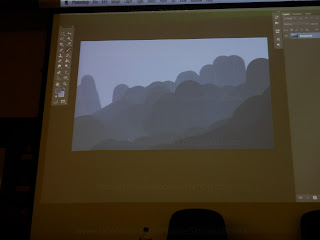 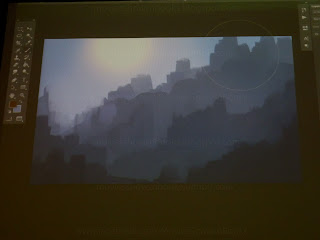 At some point during the presentation, Lita, had to end the discussion after a couple more questions, then the signing had to get underway. And, since it was a school night, Lita allowed the many children that attended get ahead in the line due to the late time of the evening. The audience was all too willing to accommodate the children. I, of course, completely relate since my daughter, as well, has school the next day; and, we still had a 2+ hour drive to get home after the event. Moreover, this exciting evening was well worth the drive out, especially for my daughter since she's into art and drawing. Kazu is an amazing inspiration for any aspiring artist.


To view the photo album from this event, go to:
Kazu Kibuishi, Illustrator, Presentation & Signing
Posted by Jasmine Albitos at 7:00 PM