NERD BLAST: Absolutely Everything!: A History of Earth, Dinosaurs, Rulers, Robots and Other Things Too Numerous to Mention by Christopher Lloyd

We have a 5-day Nerd Blast + Giveaway to kick off for Christopher Lloyd's Absolutely Everything!: A History of Earth, Dinosaurs, Rulers, Robots and Other Things Too Numerous to Mention! Illustrations by Andy Forshaw! Watch the book trailer now! Check it out and grab your copy today! 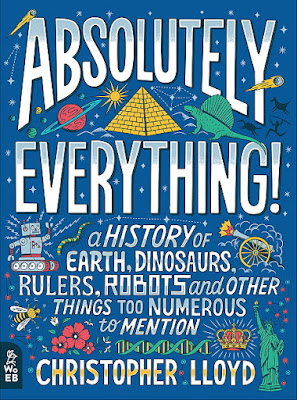 Synopsis:
How was our universe made from a tiny speck of energy? Where did the first trees, plants, animals and humans come from? What happened to the dinosaurs? What was so miserable about medieval times? How were railroads and electricity invented? What are the perils of global warming? You might have many big questions about our planet, life and people. Embark on an entertaining journey across millennia and continents with this captivating book by Christopher Lloyd, author of the bestselling What on Earth Happened. Discover everything from the creation of planet earth and the rise of animals, to globalization, wars and global warming.

Absolutely Everything! A History of Earth, Dinosaurs, Rulers Robots and Other Things Too Numerous to Mention. Join Christopher Lloyd on a thrilling ride through the history of the world in a book perfect for anyone aged 9 -99.

Praise for ABSOLUTELY EVERYTHING!

“A riveting mosaic of exciting true stories. . . I COULDN’T PUT IT DOWN!" ―Deborah Heiligman, author of Vincent and Theo: The Van Gogh Brothers

"Condensing the history of the world into one book is a daunting task, but Lloyd tackles the challenge with finesse. In addition to bountiful photographs and illustrations, Lloyd’s recognition of patterns throughout history and direct questions to readers make this book absolutely enjoyable." ―Booklist Starred Review

“From the Big Bang to yesterday’s breakfast, this BOOK OF FUN AND DISCOVERY makes sense of it ALL." ―Martin Brown, Horrible Histories

“ABSOLUTELY WONDERFUL! I wish they’d had books like this when I was young…" ―Anthony Horowitz, author of Alex Rider

“ABSOLUTELY AMAZING... Children will love it – and adults too!“ ―Jacqueline Wilson, author of Tracey Beaker

“Just gobbling up more of Absolutely Everything! What a FABULOUSLY ENGAGING READ. Nonfiction that rolls along like an adventure novel. Love it!“ ―Nicola Davies, zoologist and author of King of the Sky

**About the Author**
Christopher Lloyd graduated with a double first in history from Cambridge in 1990 and went on to become the Technology Editor for The Sunday Times. He left in 2000 to become CEO of Immersive Education in Oxford before becoming an author in 2006. His best selling history of the world, called What on Earth Happened? (Bloomsbury 2008) is now in 15 languages and has sold more than 500,000 copies worldwide. He established his own publishing house What on Earth Publishing in Spring 2010 and has published a series of timelines in collaboration with illustrator Andy Forshaw covering history, nature, science, sport, Shakespeare and Magna Carta. Christopher is now in great demand as a lecturer and storyteller in schools, museums and at literary festivals throughout the UK and abroad. He divides his time between lecturing and writing.

*About the Illustrator*
Andy Forshaw graduated in graphic design with illustration from Central St Martins College in London. He has worked on all What on Earth? books and rose to the extraordinary challenge of drawing and colouring more than 1,000 original illustrations in less than 3 months for the What on Earth? Wallbook – between March and June 2010.